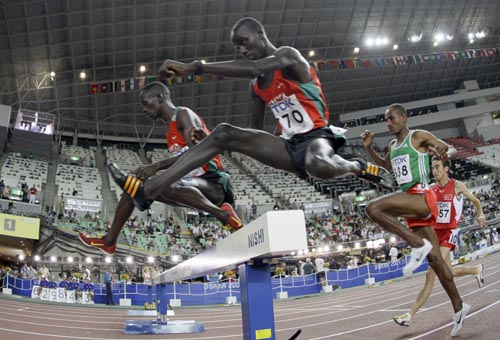 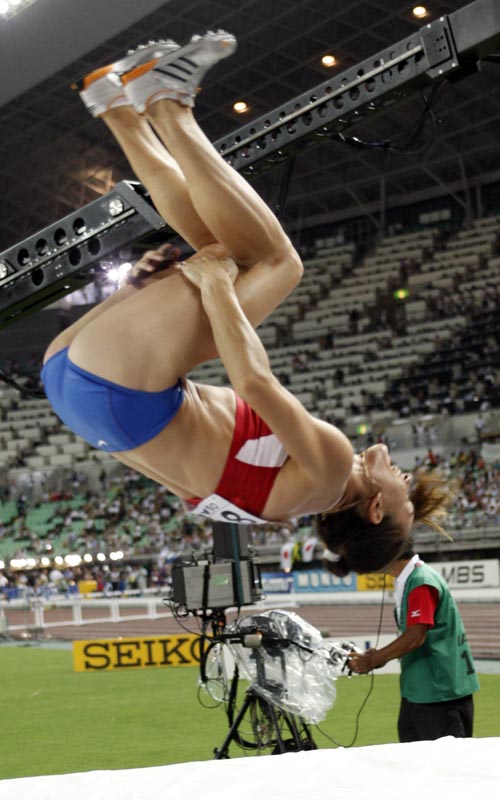 Some champions make the toughest challenge look easy. Count Yelena Isinbayeva and the Kenyan steeplechasers among them.
Isinbayeva hadn't taken off her track suit yet when the first finalist was already out in the pole vault. She lay down, towel over head and feet up, when most challengers faltered.
She brazenly skipped heights that could have given her gold earlier. She braided her hair in between world record attempts.
On her second attempt at 4.80 meters she won one of the most predictable golds of the world championships.
It was the second world title in a row for the Olympic champion. Then she sought her 21st world record at 5.02. It was the only blemish on a near perfect night, failing three times.
She did a neat backflip, waved at the crowd and went to celebrate her gold medal.
Katerina Badurova of the Czech Republic was second at 4.75 on a countback from Svetlana Feofanova of Russia.
Kenyan clean sweep
The Kenyan steeplechasers turned their traditional domination into the first clean sweep at these championships. Allowing for Kenyan-born two-time champion Saif Saaeed Shaheen of Qatar, out with an Achilles injury, runners from the African nation have won the last nine world titles.
This time Brimin Kipruto took the honors, with Ezekiel Kemboi earning silver for the second time in a row. Richard Kipkemboi Mateelong finishing third.
Gay impressive
Tyson Gay, even if he was not running in a final, was also impressive. After winning the 100 meters over archrival Asafa Powell in a thrilling weekend final, Gay ran with such power in the second-round heat of the 200 meters, he was already turning to check out the competition coming off the bend.
He still finished in 20.08 seconds, by far the best time of the evening ahead of Jamaican Isain Bolt. His main rival, teammate Wallace Spearman, also advanced.
Still, he found the going tough after the hyped clash with Powell.
"Just physically and mentally it drained a lot out of me. I am just trying to refocus," he said, adding his left knee bothered him some.
Gay ran the second fastest 200 ever earlier this season, and combined with the confidence boost the 100 title gives him, he is an overwhelming favorite for a second gold.
And if the U.S. team is in shape for the weekend sprint relay, he could end up with a triple gold-medal haul.
Failing to deliver
One champion who failed to deliver was Lithuania's discus thrower Virgilius Alekna. The double Olympic champion finished just out of the medals in fourth place. Instead Estonia's Gerd Kanter won with a best mark of 68.94 meters ahead of Robert Harting of Germany.
There was little surprise in the women's long jump, as Olympic champion Tatiana Lebedeva won with a jump of 7.03 meters to lead a Russian sweep.
Ludmila Kolchanova took silver at 6.92, and Tatyana Kotova added bronze with 6.90.
Defending champion Tianna Madison of the United States finished 10th.
In the day's other final, Kerron Clement of the United States won the 400-meter hurdles in 47.61 seconds, using his brute strength to defeat Olympic champion Felix Sanchez of the Dominican Republic, who finished in 48.01.
Sanchez got away to a fast start but was caught at the top of the back straight by Clement, whose physical strength helped him overcome fatigue over the last two hurdles.
James Carter, the 2005 silver medalist, finished fourth.