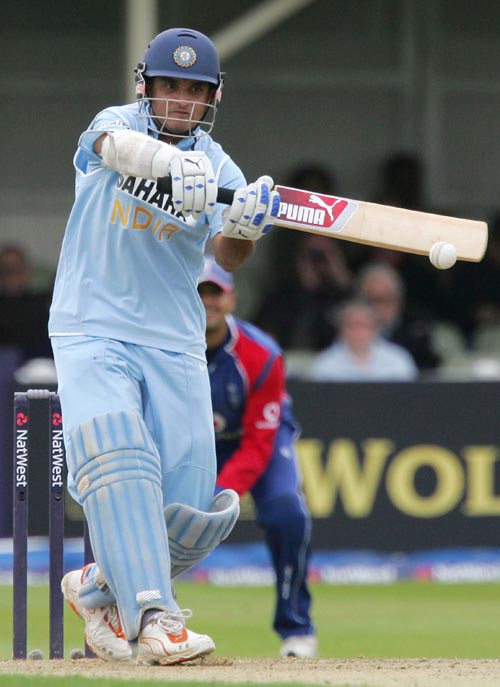 Ian Bell anchored a 42-run win for England over India in the third one-day international on Monday to give the hosts a 2-1 lead in the seven-match series.
England made 281 for 8 wickets, with Bell topscoring with 79, after being sent into bat first at Edgbaston. In reply, India reached 239 all out despite the early big-hitting of Sourav Ganguly and Rahul Dravid.
"I thought the score was about par and I think the way we fielded and the overall team performance was exceptional," England captain Paul Collingwood said. "We saved a lot of runs in the field."
Ganguly and Dravid added 104-run second wicket partnership before Chris Tremlett (2-57) removed both batsman within nine runs.
India struggled without them and Yuvraj Singh (45) was the only other India batsman who compiled a decent innings before he was run out in a mix-up with Zaheer Khan.
India had only made 36 after 11 overs when Dravid and Ganguly combined at the crease, with both batsmen hitting several back-to-back boundaries as they tried to increase the run rate.
Dravid reached his 81st one-day century off 51 balls with a single through cover.
Two balls later, Ganguly joined him for his 69th ODI half century and soon after became the fourth man to get more than 11,000 ODI runs when he ran a single to reach 61. Dravid was out for 56, edging the ball into his own stumps, and 12 balls later, wicketkeeper Matthew Prior took an athletic catch after Ganguly had edged the ball.
Ganguly now has 11,011 runs - fourth on the list. Teammate Sachin Tendulkar leads with 15,175 runs.
Tendulkar made eight before he hit a short ball from Anderson to Collingwood at point. Five balls later, Karthik (0) was dismissed in a similar manner.
Mahendra Singh Dhoni was out for 13, and four overs later, Collingwood and Bell combined to take the wickets of Ramesh Powar and Piyush Chawla in the same over, to leave India on 213 for 7. When Singh then fell after the addition of one run, it pushed victory out of reach.