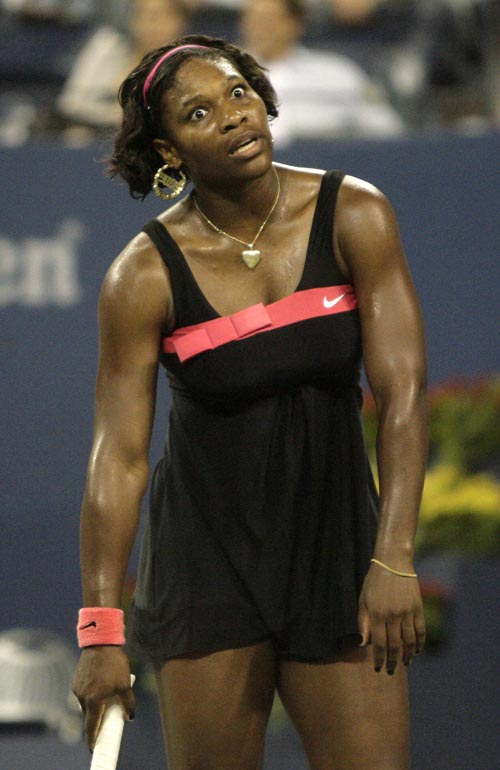 About a half-hour after Aretha Franklin finished with a rousing rendition of her signature song Monday night, Venus Williams walked onto the blue court at Arthur Ashe Stadium, and turned an overwhelmed opponent into a Hungarian in the headlights.
Respect was not foremost in the elder Williams sister's mind. A rapid and uneventful advancement was.
On opening night at the U.S. Open, the theme was breaking barriers, and the honoree was the late Althea Gibson, who became the first person of color to win the U.S. tennis championship, 50 years ago. Three African-American women - two of them famous sisters, one of them a late-blooming 22-year-old ranked No. 109 in the world - commemorated the occasion in appropriate fashion, moving into the second round, and paying homage to Gibson as they went.
"Out of all the nights, I have to do this tonight," Asha Rolle, a wild card entrant out of Miami, told herself, before she went out and scored the biggest upset of the day, with a 6-4, 1-6, 6-2 triumph over No. 17 Tatiana Golovin of France, a semifinalist here a year ago. Rolle prevailed at Louis Armstrong Stadium, across the yard from where No. 12 Venus Williams passed a lineup of 20 African-American pioneers who assembled after a stirring pre-match ceremony, hugging, kissing and otherwise greeting them, on her way to a 6-2, 6-1 destruction of Kira Nagy.
"Just watching the whole hour of entertainment, the whole story (of Gibson), it was really moving," said Williams, the two-time Open champion. "I got to be part of the story, too."
A 29-year-old qualifier from Budapest, Nagy, ranked No. 137, is in essence a career minor-leaguer who hadn't even played a main-draw Open match in seven years. She did her best but was done in by a mushy serve, and had neither the weapons nor the counterpunching ability to hold off Williams, who began her summer with an unlikely run to her fourth Wimbledon title.
Serena Williams, seeded No. 8, had a much more difficult go of it, struggling past Angelique Kerber, a 19-year-old German lefthander who showed abundant grit and some scintillating defense before succumbing, 6-3, 7-5. Serena hasn't played since injuring her thumb at Wimbledon, and had her rusty moments .
"Oh my God, I made so many errors out there," she said.
At 27, Venus is 10 years removed from her Open debut, and launched her onslaught without delay, smacking a pair of forehand return winners to open the match, forging a break a minute later with a bolt of a crosscourt forehand. She rarely relented thereafter, pulverizing Nagy's serves.
For good measure, she threw in a record-tying 129-mph serve in the second set, one mile-per-hour faster than the fastball she served in the French Open.
"She has unbelievably hard shots and an unbelievably hard serve," Nagy said.
Meanwhile, it was a missed forehand, by Golovin that carried Rolle to the greatest victory of her life. Golovin challenged the call, and when it went Rolle's way, she collapsed to the court and pounded it with her fist.
She exulted and signed autographs. A night held to honor Althea Gibson had turned out just about perfectly. "I wasn't scared. I wasn't nervous," Rolle said. Someone asked about Gibson. She smiled and said, "I wouldn't be here today if it weren't for her."