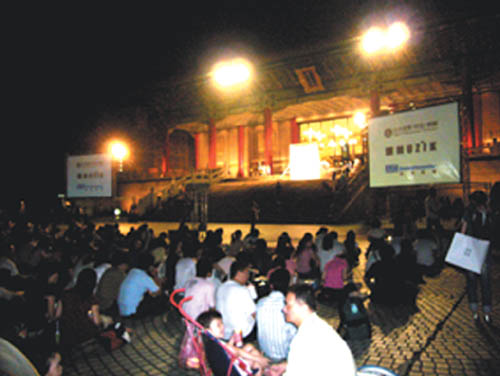 Walking around Taipei on last Sunday evening, you might find the downtown city was overcasted with romances. The Taipei Philharmonic Orchestra presented a splendid and electrifying performance in the National Concert Hall at the National Taiwan Democracy Memorial Hall.
This performance also hit the record, that is, a total number of 2,000 tickets was sold out within 84 hours and the hall was flanked by a group of people joining a live broadcasting party because they cannot access to the tickets.
When the performance came to the end, the first violin of Taipei Philharmonic, Su Shien-Ta, who is also director of the Department of Music at Taipei National University of the Arts, offered a violin solo performance for the audience gathering outside the hall. The performance was dubbed as "The mid-summer night of Orchestra Romance".
A year ago, a Japanese drama, "Romance in Orchestra," has caught the Japanese public attention on classical music. "This Japanese drama successfully depicted how musicians interpret classic music through a comedy style," Lin Tien-chi, conductor of Taipei Philharmonic. told Taiwan News during the interview last week. "It helps the classical music promotion in Taiwan as the development has encountered a bottleneck in the recent year," he added.
It seems the Taiwanese public is also astonished by the classic music magic, as 2,000 tickets were sold out within three days and hundreds of audiences gathering at the plaza of the hall listening to the live broadcast.
"While the Japanese drama was broadcasting in Taiwan, many fans and supporters phoned to Taipei Philharmonic hoping they can perform the classical music used in the drama," indicated Derek Wu, manager of Taipei Philharmonic. "The repertoire of the performance was also voted by fans via the Internet," he continued. The repertoire included William Tell: Overture by G. Rossini, Piano Concerto No.2 by Rchmaninoff and Symphony No. 7 by Beethoven. The orchestra even integrated some elements of rock music such as rotating cellos into their encore performance.
"It is my first time watching a classical music performance like that and it is out of the world", said Mr. Wang who brought his 6-year old daughter attending this performance.
The live broadcasting provided by Taipei Philharmonic allowed hundreds of supporters who did not have tickets to enjoy the passionate performance. Yet, the stereo seemed to leave much to be desired. "I am appreciating Taipei Philharmonic's efforts for this service, but the bad quality of the stereo system overshadowed the performance," Miss Rita Chiu, also a member in a student orchestra, told to the reporter.
The Japanese drama seems to open a window of opportunity for classical promotion, yet, "the government should also appropriate more resources and rearrange the education system for cultivating future musicians", Lin Tien-chi added.
Picture shows the audience watching the live broadcasting.