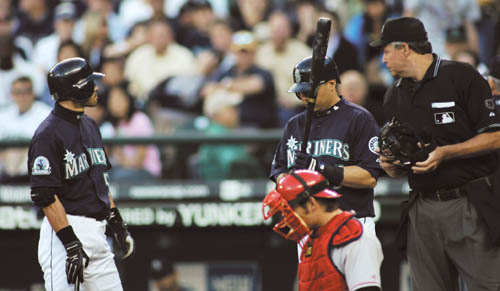 The Los Angeles Angels don't dance, strut or swagger. Right now, only a bare majority of them can run.
So they plod.
In a game that demands 162 games in 180 days, plodding is a good way to go.
They came to Seattle Monday night without their first baseman and their third baseman, but when their ice bucket melted, it only meant they had enough water to drown the beginnings of a local pennant-race bonfire.
They won, 6-0, and now they lead the Mariners by three games in the American League West, and in the next two days we'll see if they can find a jugular vein to squeeze.
Manager Mike Scioscia kept maintaining that this was not a Big Series, at least not in comparison to all the others, which is how you know that it was.
But John McLaren, the Seattle manager, said the series was actually somewhat urgent and that he was anxious to see it, and then he got himself ejected, four batters into the game, with a bobbleheaded tantrum that honored the teachings of McLaren's old boss, Lou Piniella.
The crowd of 45,998 that crammed into this exquisite ballpark loudly congratulated McLaren and then went mute.
The Angels were extraordinarily sharp, from John Lackey's dictatorial pitching to Garret Anderson's solo homer and two-run double to Jeff Mathis' squeeze bunt.
But this is their identity now. Their offense dozes, and their bullpen trembles, and they keep searching for a No. 4 starter, and they're one game over .500 since June 24. Yet the Angels' longest losing streak, since the second week of the season, is three games, and it's only happened twice.
And when an actual occasion visits them, they come together - a three-game sweep of Detroit, a 4-2 job on the Red Sox and Yankees at home in August, and even a Jered Weaver-led shutout of Toronto last Friday, after consecutive losses.
While the Angels' sensors picked up every opportunity, Seattle shrank from the moment. Typical was Jose Lopez's no-look tag on Gary Matthews Jr.'s stretch double. Lopez put his glove down and waited for the Angel center-fielder to slide into it, but Matthews held up and then slipped around Lopez, and he's the one who scored on Mathis' squeeze.
"That's kind of like the old dead leg," Scioscia said.
Some other legs have come alive. There was an 18-game stretch in August when Anderson could not manage a home run, and he had one double between August 2 and August 20. In the first inning here, he slammed a hanging breaking ball by Miguel Batista into the right-field seats. In the third inning, Anderson barely missed grazing the left-field line, then turned around and jerked a silencing, ground rule double that brought home two runs and created a 3-0 lead.
"The crowd was getting ready," Anderson said. "it reminded me a lot of the atmosphere they had here in 2001 (when the M's won 116 games). They had the music going and a lot of noise, but we were able to get on top of them."
Anderson drove in 10 runs against the Yankees last Tuesday, but he has 18 RBIs in his past 12 games, including four home runs in his past seven. His importance to this offense was far more obvious when he was hurt and unproductive than it was when he had back-to-back 123 RBI season. Of course, that's more of a statement on our observational powers.
"I feel good, I feel like nobody's going to get a fastball past me," he said. "Batista just left a couple of balls over the plate tonight. The ball I hit foul and the double I hit fair were basically on the same pitch, one that he left up and away. But my problem has just been at-bats. Now that I'm getting four or five plate appearances every night, I'm starting to feel better."
Lackey steamed to a 16-8 record and didn't allow a Mariner to get to second base after the fourth inning. It was the first shutout for the M's since Lackey did the same thing to them on July 31. Indeed, Lackey interrupted an epicurean month for the locals, who were hitting .329 for August. That was the second-highest average for any team, in any month, since 1957.
Lackey dismissed the final six Mariners as if he were driven to turn the lights off and get into bed, which he apparently was.
"I knew on the plane last night that John was sick," Anderson said. "But as long as you can get out on that field you can pretty much get through it."
In other AL action: Chicago White Sox 5, Tampa Bay 4; Detroit 16, NY Yankees 0; Cleveland 8, Minnesota 3; Toronto 6, Oakland 2, 12 innings.
In National League action: Atlanta 13, Florida 2; Philadelphia 9, NY Mets 2; San Diego 3, Arizona 1; LA Dodgers 5, Washington 4; San Francisco 4, Colorado 1.