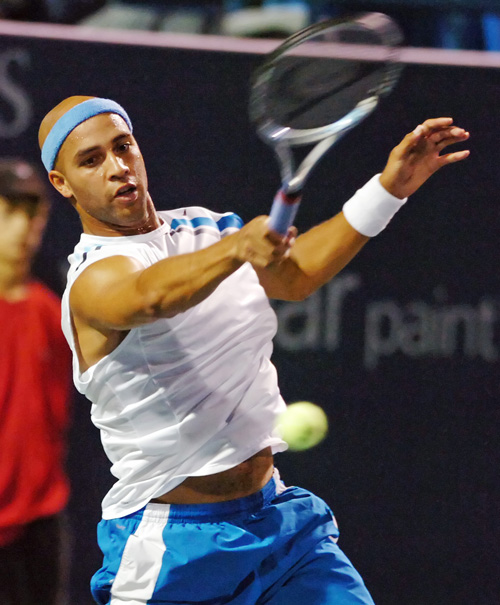 Third-seeded American James Blake eased into the third round of the US$675,000 Pilot Pen on Tuesday as rain continued to disrupt the US Open tune-up event.
On a chilly evening, the 25-year-old American overwhelmed unseeded Frenchman Arnaud Clement 6-4, 6-2 in a match featuring nine service breaks and multiple unforced errors.
Blake, who reached the finals in Cincinnati last Sunday, was far from his fluent best. Despite not firing on all cylinders, he proved too strong for Clement who just couldn't get his counter-punching game going.
"It was a little tough," Blake said. "You just have to accept that you're not going to hit the 125 or 130 serve. I took advantage of his second serves. In these conditions, being chilly and all, I knew he was not going to come up with Karlovic second serves."
The sixth-ranked American has now extended his winning streak to 7-0 against the Frenchman.
"It's not as if it's indicative of his play. He really is one of the best players out there. I know with his ability he can get me on any given day," said Blake who now awaits the winner of the match between Robby Ginepri and Agustin Calleri.
Heavy rain poured down all day at the Connecticut Tennis Center, forcing officials to cancel the day session and push all but four matches to Wednesday.
"During a rain delay, you don't want my job," tournament director Ann Worcester said. I can't remember canceling out a session for the 10 years I've been doing this."
Giant-killer dazzles
In the only other men's match, American giant-killer John Isner continued his dazzling summer run with a straight set dismantling of Germany's Benjamin Becker 6-3, 6-4.
The 22-year-old American, who smashed a stunning 144 aces on his way to the final in Washington a few weeks ago, entirely dominated the contest, breaking his opponent once in each set to seal the deal in 58 minutes.
"I knew his game pretty well having played him in Washington. I was really comfortable out there. I know what I had to do," said the 199th-ranked American, who fired 13 aces to his opponent's 14.
Isner came into the post match news press conference sporting a 'J-block' shirt, in reference to James Blake's rooting section of the same name.
"I lost a little bet with James, so I have to wear this at every press conference I do," Isner said. "When I warm up, I have to wear this other shirt which he autographed. It's worse. It has his face in the back of it."
In women's action, Poland's Agnieszka Radwanska outlasted Ai Sugiyama of Japan 7-6 (7/5), 3-6, 6-4, while Indian Sania Mirza downed Anabel Medina Garrigues 6-3, 6-3.