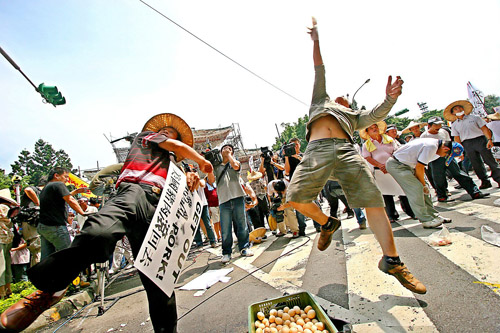 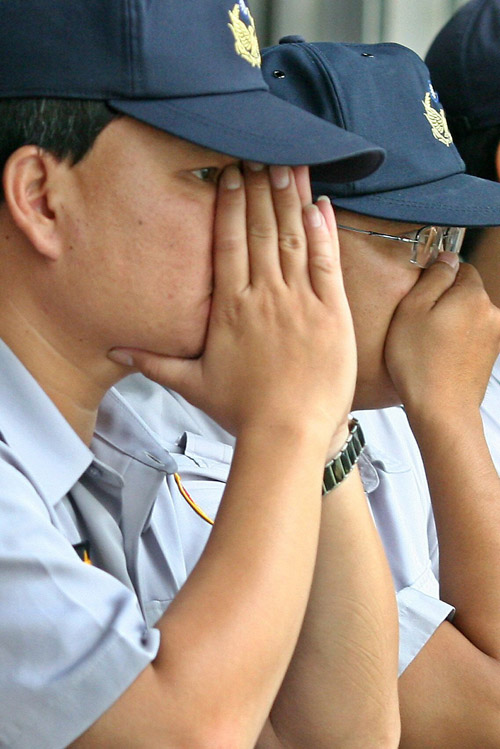 Taiwan's top officials yesterday promised that they will continue the ban on ractopamine use in pigs and cattle after two mass rallies were staged outside the Department of Health and Council of Agriculture in Taipei City.
About 3,500 pig farmers, led by legislators across party lines, yesterday morning held a demonstration in front of the Department of Health to protest against a possible easing of the ban on ractopamine use in livestock. Some protesters carried piglets at the demonstration.
Chanting the slogans "Get out, USA pork" and "We refuse to eat pork that contains poisonous ractopamine," protesters threw rotten eggs and pig dung to express their dissatisfaction with the DOH, and called on the DOH not to lift the ractopamine ban for the sake of the public's health and pig farmers' rights.
Policemen, military soldiers and reporters were seen getting hit by pig dung and rotten eggs, some of which broke open to reveal dead chicken fetuses inside. Policemen raised barricades to bar the protesters from the department offices, but some demonstrators and policemen still engaged in minor clashes.
After two hours of shouting slogans and hurling pig dung at the building, DOH Minister Hou Sheng-Mou stepped out at around 11:10 a.m., and assured the crowd that ractopamine is still a banned substance in Taiwan and more negotiations are needed to reach a conclusion on whether the ban will be lifted.
But the protesters were dissatisfied with Hou's answer. After a mediation session held by legislators, Hou agreed to sign a promise letter.
"I, DOH Minister Hou Sheng-mou (侯勝茂), promise pig farmers that pork imports containing ractopamine will not be allowed for sale in Taiwan before related laws are amended; the DOH will adopt the same stance as the COA on whether to allow the pork imports with ractopamine to enter Taiwan's market," the letter read.
Protesters forced Hou to touch a piglet before he returned to his office.
After the DOH office protest, the crowd then moved to COA offices and staged a rally in front of the council at around 2 p.m. Waving flags and chanting slogans, farmers told reporters that the use of ractopamine in pigs will serve only to harm consumers and the local swine industry, because ractopamine residue will most likely stay in the internal organs of livestock, thus local consumers would fall victim to health problems if the ban is lifted.
COA Vice Chairman Hu Fu-hsiung also signed the promise letter, stressing that the council respects the opinion presented by the farm industry, and the ban on ractopamine will remain in effect. The demonstration ended at around 2:45 p.m.
In the company of the legislators, representatives of the protesters also presented a petition to the American Institute in Taiwan. On behalf of the institute, spokesman of the institute Thomas Hodges accepted the petition, saying that he will pass the information to the related officials in the U.S.
Speaking in fluent mandarin, Hodges noted that ractopamine has been used in livestock in the U.S. since 1999, and the substance will not pose a threat to human health if it is used in limited amounts.
Meanwhile, Premier Chang Chun-hsiung (張俊雄) yesterday said that the government has not set propositions or any timetable to resolve the controversy over the use of ractopamine. He added that he has designated Vice Premier Chiou I-jen (邱義仁) to coordinate with other related agencies to figure out a solution for the controversy.
Ractopamine is an animal drug used to promote the growth of lean meat in livestock; the substance has been banned in Taiwan since 2006.