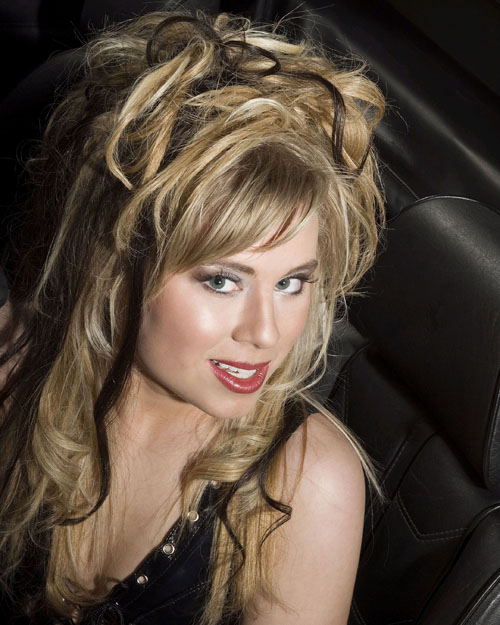 In the pre-fab music environment of "American Idol" and "The Search For The Next Pussycat Doll," it seems that cleaving to a gimmick is required for a successful career.
Luckily, local rapper Whitney Peyton has embraced a good one.
Peyton has a dream of living off her music, and she believes she has the skills to realize it, but she says being an attractive and petite blonde has to help.
Beyond her years in a media-savvy sense, the 19-year-old Peyton thinks she will succeed, in part, due to her "image."
"There's no getting over the fact that I'm a white, female MC," Peyton says.
She has already fashioned herself into an audience-friendly brand with "really modern, mainstream, pop-rap" music that has mass appeal.
While the number of MySpace friends an artist has is a questionable indicator of popularity, she does boast an impressive count of 15,000. In addition, she's currently the No. 1 regional artist on MTV2's "On the Rise" contest,with 32,000 votes.
She attributes her popularity to being "a breath of fresh air ... and not a cookie-cutter rapper."
Allying herself with popular influences Eminem, Beyonce and the Red Hot Chili Peppers, Peyton adds she strives to be mainstream by trying "to think what would be on the radio a year from now so my music is always current." In her case, that includes writing all of her own lyrics and using violins, organs and other instruments not usually found in rap songs. She writes about "real-life situations, relationships, parties, things like that - not about cars or money or anything like that."
Peyton also frequently plays with her image.A few months ago she presented herself in largely standard pictures wearing jeans and tank tops, black, baggy pants and a fedora with makeup kept to a minimum. She has since shed some threads for a sexier, more scantily-clad look.
"I already had pictures of the good-girl image and I wanted to show that I'm more. I'm a good girl and I'm edgier and I like to party and have fun," she explains.
Now, she dons leather, a boxing-style top and tight, black pants. Her rougher edge is accented with a no-nonsense pout, stylized hair and heavier makeup.
She has submitted photos for consideration in Maxim magazine's "Hometown Hottie" contest. Also, she posed semi-nude in Pulse, a local weekly entertainment publication.
Asked if she would pose nude for Playboy, she says, "I would be willing to pose completely nude because that is a very legit magazine and the pictures are tasteful."
She doesn't worry if people disapprove of her maximizing on physical gifts.
"People will hate me or love me no matter what, that's the risk I take by putting myself out there," she says. "So I figure why not just be myself?"
That kind of independent, take-control attitude has served Peyton well ever since she started honing her skills in front of crowds in middle school. She developed her style from a love of poetry and an interest in hip-hop and dancing.
Petyon has a sampler of music, "Delusions of Grandeur," and has collaborated with her fellow Side Stream artists in "Side Stream: The Movement." She hopes to debut a full-length CD later this year.