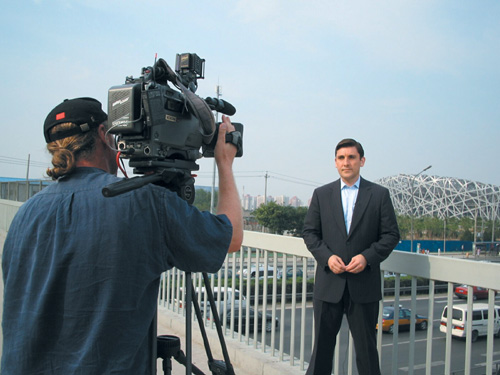 'Countdown Beijing' airs Saturday August 4 - Sunday August 12
'Countdown Beijing' is CNN's dedicated week of coverage live from the Chinese capital that showcases the city as it prepares for one of the most important sporting events in history, the 2008 summer Olympic games. Featuring unprecedented live filming from sites around Beijing, A-list interviews, in-depth reports and an online special, CNN brings global viewers unique insights into the city, its people and China itself during a hugely dynamic period of transition.
One year out from the opening ceremony at the stunning 'Bird's Nest' stadium, CNN hears from athletes and construction workers, business people, artists and environmentalists as it takes the pulse of a city seeking to define a global view of contemporary China. Throughout the week, Kristie Lu Stout reports live from locations around Beijing for CNN's award-winning, morning news program CNN TODAY while Andrew Stevens reports live for the Asia evening prime-time show, WORLD NEWS ASIA. In addition, CNN's Beijing correspondent John Vause reports from the capital and beyond on the impact of the XXIX Olympiad.
TALK ASIA, CNN's in-depth interview program, hears from a remarkable line up of Olympic and artistic greats throughout the week. The first program sees host Anjali Rao sit down with 'China's Oprah Winfrey' and Olympic Ambassador Yang Lan, while the next features Chinese female athlete of the century and four time Gold medal winner Deng Yaping, who explains her new role in charge of the city's Olympic village.
The special section of cnn.com at www.cnn.com/beijing features exclusive stories, reports and interviews, and will include interactive multimedia elements showcasing the city and detailing how the Chinese capital's landscape has transformed in preparation for the games. Additional highlights include a CNN-designed map that illustrates the path of the Olympic torch relay, poll questions and blogs from CNN journalists, as well as streaming of the video packages that air throughout the week.
Reports airing in CNN programming throughout the week to more than 200 million households globally include:
* An interview with the Pritzker Prize winning architects, Jacques Herzog and Pierre De Meuron, designers of the two striking biometric structures and showpiece venues for next year's Olympics, the 'Birds Nest' national stadium and the 'Water Cube' aquatics center.
* A look at the high-pressure daily life of one of China's elite gold medal favourites, Guo Jingjing. CNN visits her home, talks to her about her training and asks her whether the weight of national expectation is a help or a hindrance.
* Beijing is planning for clear, blue skies during the Games. CNN looks at what the city has in store to clean up its air including the creation of rain.
(Airtimes are applicable to Beijing, Hong Kong, Kuala Lumpur, Manila, Singapore and Taipei).