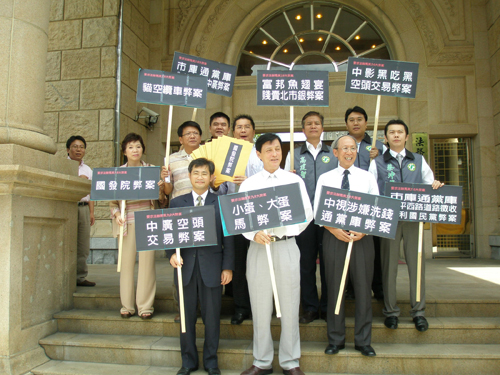 With the presidential election almost nine months away, the governing Democratic Progressive Party yesterday formed a task force aimed at exposing scandals allegedly involving by Ma Ying-jeou (馬英九), the presidential candidate of the main opposition Kuomintang.
The task force constitutes DPP's legislators and Taipei City councilors, who would examine Ma from his tenure as Taipei City mayor between 1998 and 2006 through his party chairmanship and expose any scandals in which Ma might have been involved.
DPP caucus leader Wang Sing-nan said yesterday at a press conference that it was unfair that while the special investigation team had not looked into any of the numerous alleged wrongdoings that had involved Ma besides the special mayoral allowance case, the team had revived investigations into the old cases that had implicated the DPP presidential candidate Frank Hsieh (謝長廷).
It was the unfair judicial treatment of Hsieh that drove the DPP to form the 'stask force, which would attempt to provide evidence related to "Ma's nine major scandals" apart from the special mayoral allowance case, Wang said, urging the special investigation team to start inquiring into these scandals as soon as possible.
Ma is standing trial on charges of lining his pockets during his time as Taipei mayor with NT$11 million from monthly allowances set aside for the mayor's discretionary use.
Wang said the scandal-exposing task force would expose details of Ma's alleged involvement in the nine major scandals everyday except for the days on which Ma's case is being heard.
The alleged scandals include the transactions of Broadcasting Corporation of China and Central Motion Pictures Company, both of which were formerly owned by the KMT, the alleged money laundering by China Television Co., Taipei Area scandal, Taipei Bank's bad loans to the BCC, the cheap sale of Taipei Bank to Fubon Bank, a land deal, and the Maokong cable car system.
DPP Legislator Hsu Kuo-yung said the media have painted Hsieh as "the presidential candidate walking a tightrope" because of the revived investigation into an old allegation that Hsieh took illegal political donations from a temple during his tenure as Kaohsiung mayor. Hsu said that in comparison, Ma's special allowance case, for which he has been indicted, showed that the rope Ma had been walking had already broken.
After the press conference, Wang led the members of the task force to the Supreme Prosecutors Office to present what they said was evidence of Ma's involvement in nine scandals to Prosecutor-General Chen Tsung-ming and to aske that investigations be launched into these allegations.
Ma, who was in a "long stay" trip to central Taiwan yesterday, did not respond to the DPP's move except to say, "No comment."
Meanwhile, Legislative Speaker Wang Jin-pyng (王金平), a KMT heavyweight, said that it is no blessing for the country if the presidential election is heading in the direction of smear campaigns.