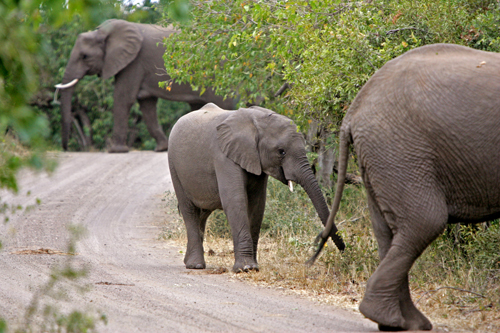 African nations agreed yesterday to extend a 1989 ivory export ban for nine years after a one-off sale of southern African stockpiles in a plan to help endangered elephants.
The accord, reached overnight on the sidelines of a U.N. wildlife trade conference in The Hague, was a compromise between countries led by Kenya and Mali who wanted a ban, and Botswana, Namibia, Zimbabwe and South Africa who favor limited sales.
Julius Kipng'etich, head of the Kenya Wildlife Service who led his country's delegation, said in a statement the deal was a "proud moment for the continent" after days of wrangling among African nations.
A Kenyan statement said the deal would allow one-off sales of government ivory stockpiles by the four southern African nations, registered as of January 31, 2007, and then bar proposals to the Convention on International Trade in Endangered Species to export ivory for nine years.
Countries led by Kenya and Mali had argued that more sales would spur illegal killings that would further endanger elephants. Others say regulated trade can help by plowing cash into conservation and into building schools or hospitals.
The deal was scheduled to be voted on by all 171 nations late yesterday at the June 3-15 CITES talks.
Delegates have said that any deal among Africans about elephants would probably win support even though some experts say a trade moratorium is out of line with CITES, which permits strictly regulated exports from southern African nations.
"It's not a perfect deal but we will improve on it as we go on," the statement quoted Zimbabwe's Environment and Tourism Minister Francis Nhema as saying.
Kenya and Mali came to the CITES talks demanding a 20-year extension of the moratorium on African ivory exports. They say poaching is rising and killing 19,000 elephants a year.
Botswana, Namibia, Zimbabwe and South Africa want to allow regular trade to benefit remote communities, where rising elephant numbers come into conflict with farmers.
African elephants number about 470,000-685,000 against millions decades ago, but populations are rising in some southern regions. Ivory is prized for jewelry and for carvings.
Since the 1989 ban, a one-off sale of 50 tons of ivory was approved in 1997.
Another approved last week - of 60 tons to Japan split between 20 tons from Botswana, 30 tons from South Africa and 10 from Namibia - would become part of the agreed stockpile sale.
It was not clear how big the stockpiles are. Stockpiles come from animals that die of natural causes, from seizures from poachers and from shooting "problem elephants."