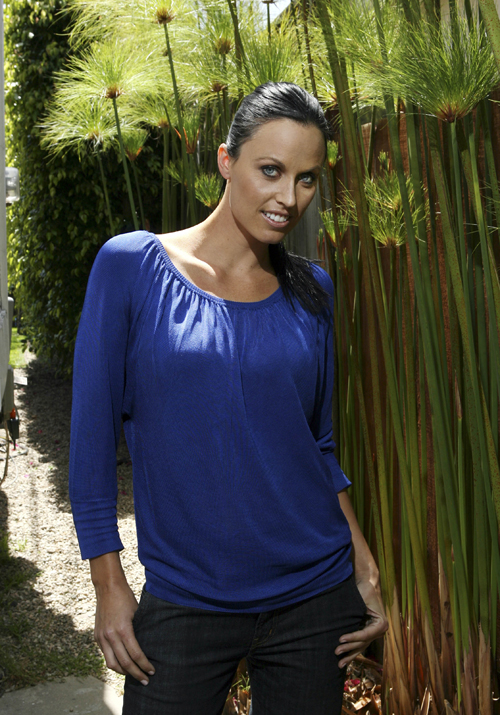 Posing nude in the July issue of Playboy was just another day at the office for Olympic swimmer Amanda Beard.
"I go to the pool - which is my office - in little swimsuits," said Beard, who appeared on the cover and in an eight-page spread. "It's my office attire. It's not unusual for me to be wearing not very much clothing."
It might be business as usual for the 25-year-old, but her critics do not see it that way. Some say Beard, by using her sex appeal to gain recognition, is undermining the progress elite female athletes have made toward being appreciated for their abilities, regardless of appearance.
"I would say that she's giving women a bad name, she's turning beauty into a negative thing," said Marlen Esparza, a U.S. boxer. "It's good for her to show that she's a pretty woman and she can do what she does and be the best at it, but I think there's a limit and she's definitely crossing it."
USA Swimming's executive director, Chuck Wielgus, agreed.
"As a membership organization that caters primarily to children and teenagers, I don't feel that the appearance by Ms. Beard in the July issue of Playboy magazine is an appropriate portrayal of our sport," he said. "We strive . . . to promote the values of hard work, dedication and teamwork that swimming instills in its young athletes and their families."
Beard first caught the public's eye when she was 14, albeit more for her athleticism and naivete. In 1996 at the Atlanta Games, Beard won three medals and stood on the medal stand clutching a teddy bear. She added four more medals in the next two Olympics.
But Beard garnered plenty of attention out of the pool, appearing in Sports Illustrated's swimsuit edition, Men's Fitness, Maxim and FHM while being named the hottest female athlete by ESPN.com's Page 2 in 2005. She also secured endorsement deals, including a million-dollar contract with Speedo.
High earning power
Beard, who commands US$15,000 for a personal appearance, is considered one of the top-grossing female athletes in the world, but agent Evan Morgenstein refused to define her net worth.
With a vision of a long career beyond the 2008 Beijing Games, Beard plans to launch a signature line with approximately 50 different products - ranging from clothes to calendars - within the next year.
"It surprises me that someone with that much power and income would need to (pose in Playboy)," said Courtney Thompson, a USA Volleyball player who lives at Colorado Springs' Olympic Training Center. "I wouldn't think all of that extra money would be worth it to her. Unless that was a childhood dream, I don't see how that would further her career."
Sexy athletes
A factor in Beard's "very personal" decision to pose in Playboy was the desire to promote a healthy, athletic body as the ideal.
"What I really want younger girls to know is that you can be sexy and attractive and beautiful and healthy," Beard said. "You don't have to be a stick-skinny model. . . . I personally feel like athletic strong bodies are very sexy, whether it is a boxer, wrestler, swimmer or diver or gymnast. They all have such amazing bodies that they've created to excel at their sport ... they should be out there and showing off how great these healthy bodies look."
Beard acknowledged America might have a different definition of sexy, something that wrestler Tina George noticed especially after competing overseas.
"In other countries, it seems like they promote their women athletes as athletes," George said. "Here, you have to be a good-looking woman to get any media attention or get any recognition for what you've already fought for in the ring, on the mat, or in the pool. It's our society."
Boxer Caroline Barry, of Colorado Springs, said Beard is just using her assets and running up against old-fashioned notions of what's proper.
"You use what you've got," Barry said.
But Thompson said Beard might not be utilizing her fame for the best purposes.
"As an elite woman athlete, there aren't that many of us," Thompson said. "If you are in a spotlight you have to be aware of how you're affecting the younger generation ... you have such an opportunity at that level to be a role model and teach people a lot of things."