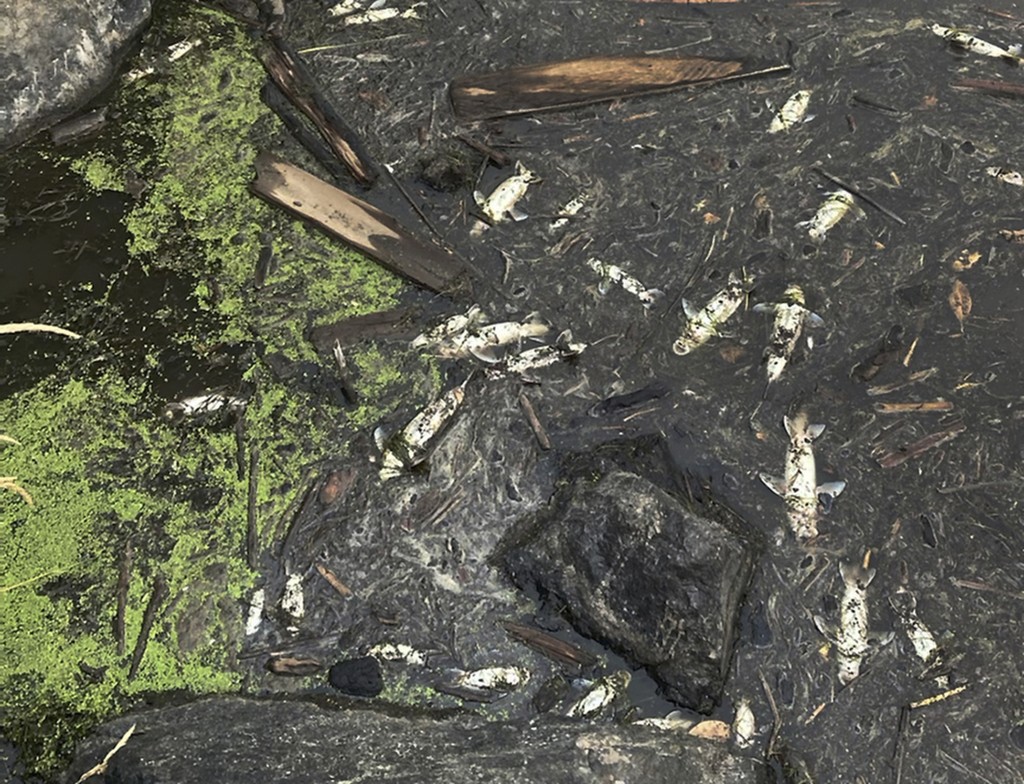 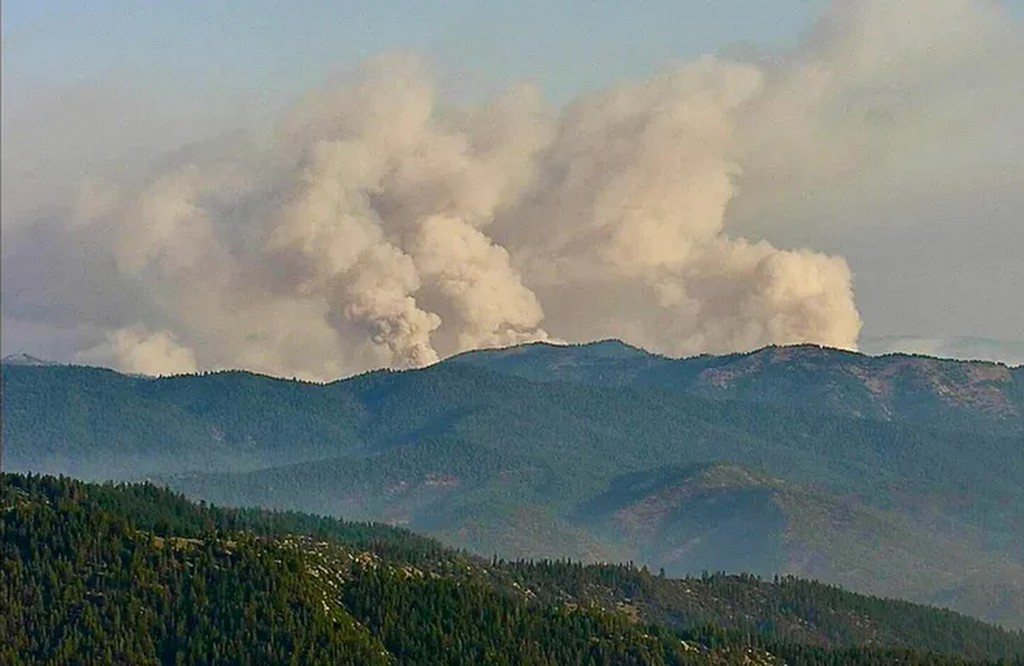 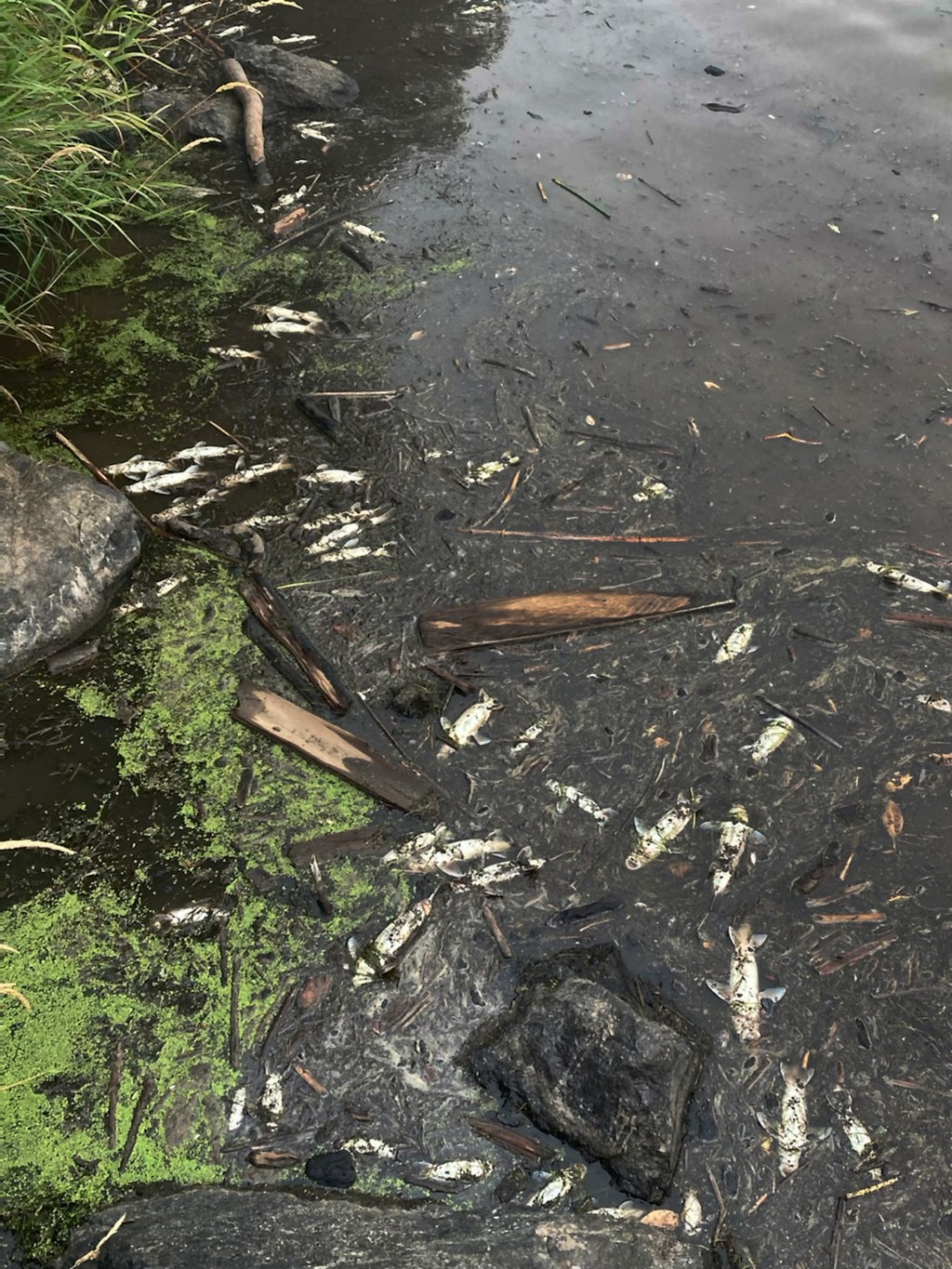 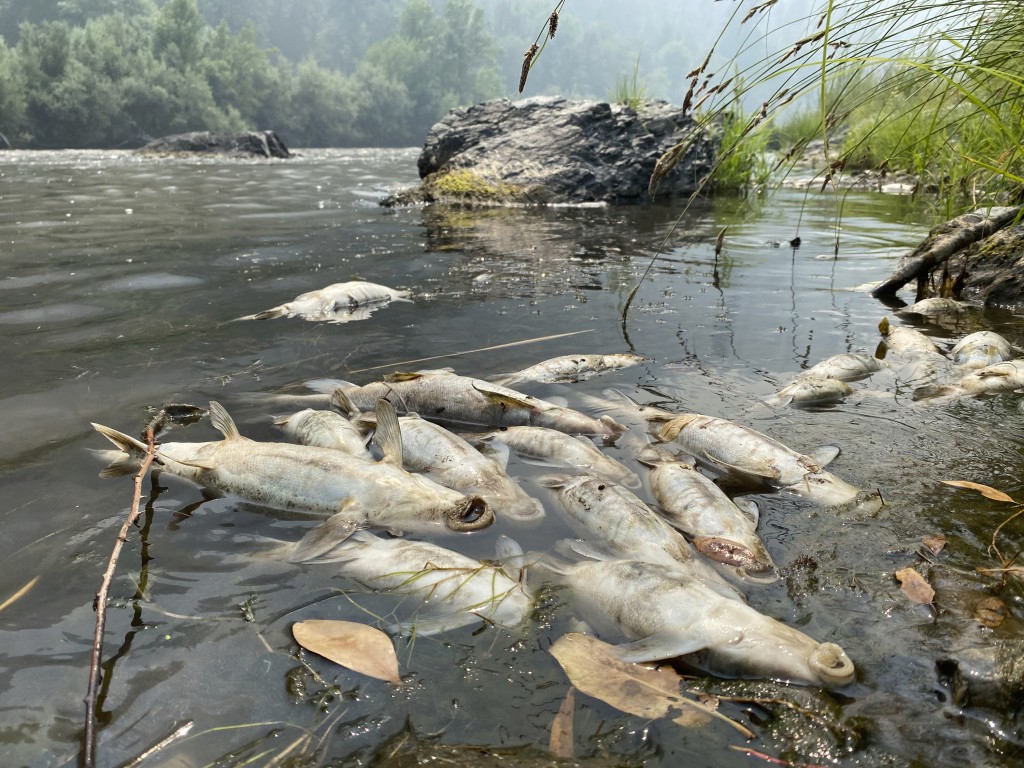 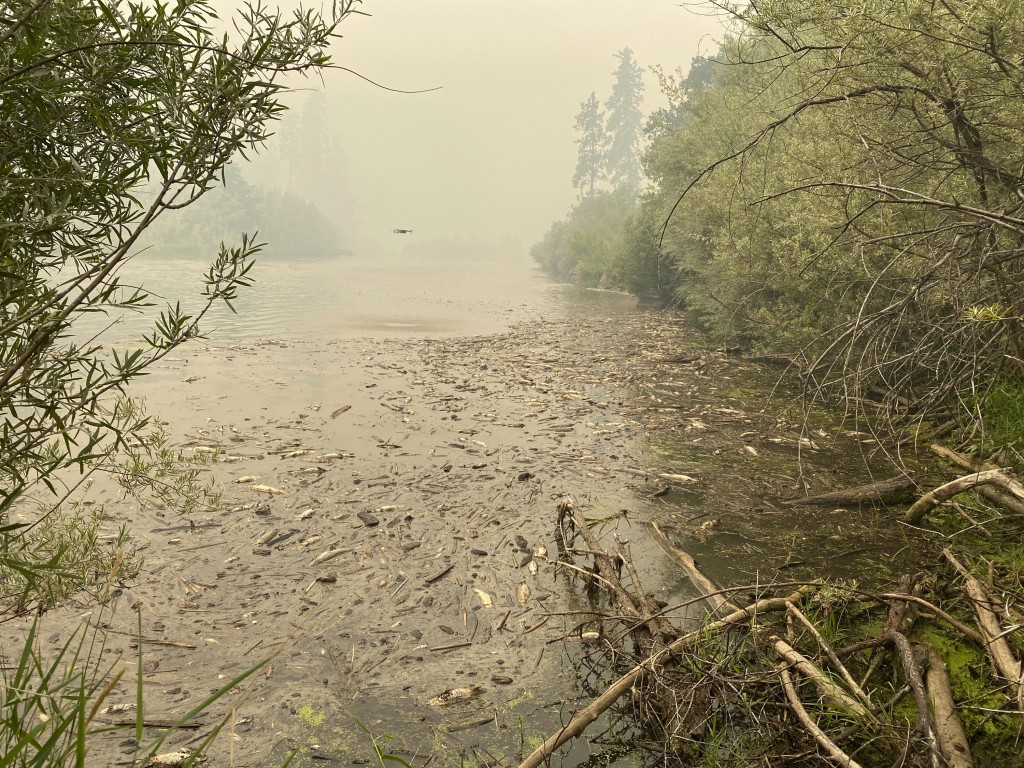 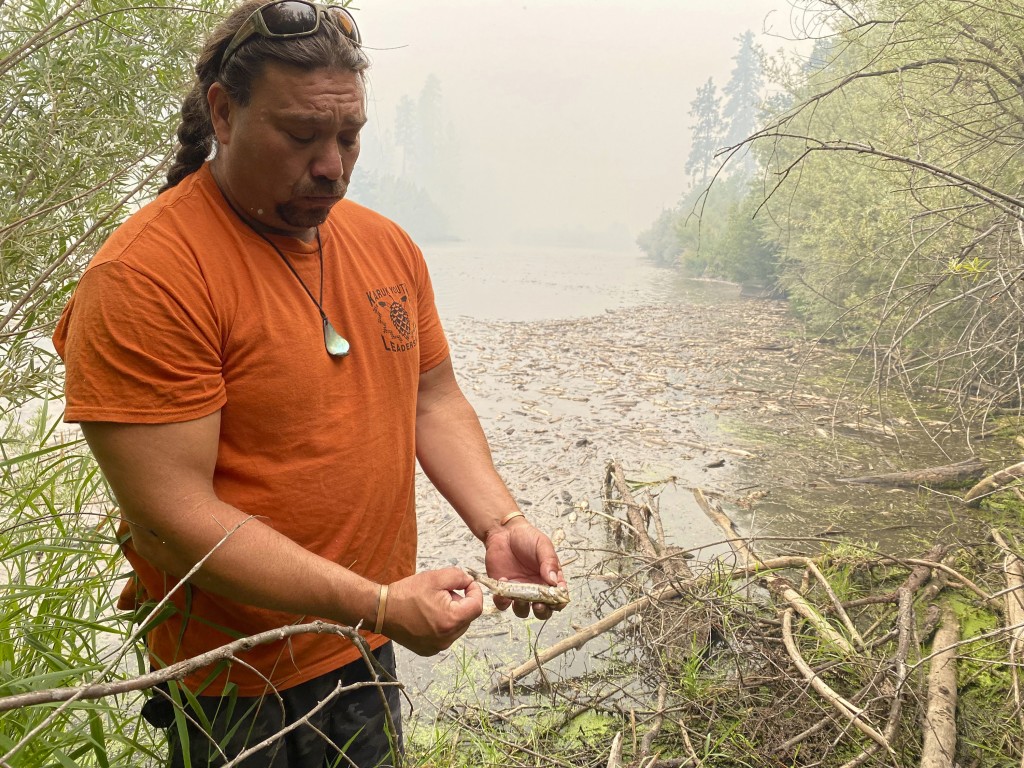 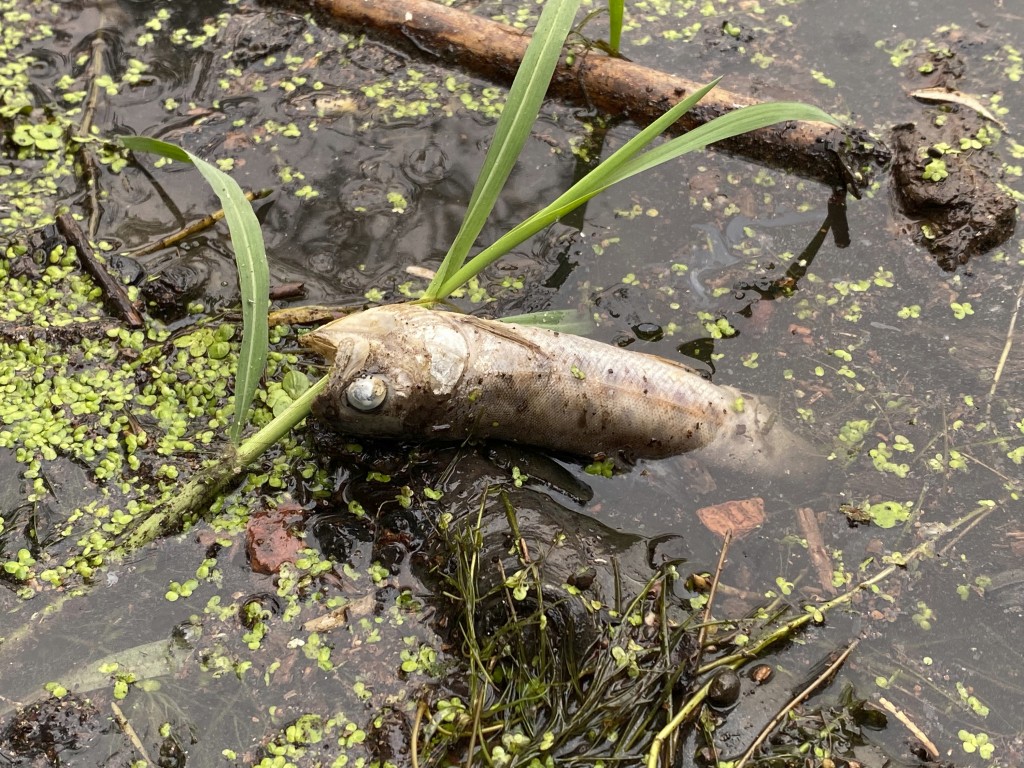 A wildfire burning in a remote area just south of the Oregon border appears to have caused the deaths of tens of thousands of Klamath River fish, the Karuk Tribe said Saturday.

The tribe said in a statement that the dead fish of all species were found Friday near Happy Camp, California, along the main stem of the Klamath River.

Tribal fisheries biologists believe a flash flood caused by heavy rains over the burn area caused a massive debris flow that entered the river at or near Humbug Creek and McKinney Creek, said Craig Tucker, a spokesman for the tribe.

The debris entering the river led to oxygen levels in the Klamath River dropping to zero on Wednesday and Thursday nights, according to readings from tribal monitors at a nearby water quality station.

A photo from the Karuk taken about 20 miles (32 kilometers) downstream from the flash flood in the tributary of Seiad Creek showed several dozen dead fish belly up amid sticks and other debris in thick, brown water along the river bank.

The full extent of the damage is still unclear but the tribe said late Saturday it appears the fish found dead 20 miles downstream were swept there after their deaths and that the fish kill isn’t impacting the entire river.

“We think the impact is limited to 10 or 20 miles of river in this reach and the fish we are seeing in Happy Camp and below are floating downstream from the ‘kill zone,'” the tribe said in an updated statement, adding it continues to monitor the situation.

The McKinney Fire, which has burned more than 90 square miles (233 square kilometers) in the Klamath National Forest, this week wiped out the scenic hamlet of Klamath River, where about 200 people lived. The flames killed four people in the tiny community and reduced most of the homes and businesses to ash.

Scientists have said climate change has made the West warmer and drier over the last three decades and will continue to make weather more extreme and wildfires more frequent and destructive. Across the American West, a 22-year megadrought deepened so much in 2021 that the region is now in the driest spell in at least 1,200 years.

When it began, the McKinney Fire burned just several hundred acres and firefighters thought they would quickly bring it under control. But thunderstorms came in with ferocious gusts that within hours had pushed it into an unstoppable conflagration.

The blaze was 30% contained on Saturday.

The fish kill was a blow for the Karuk and Yurok tribes, which have been fighting for years to protect fragile populations of salmon in the Klamath River. The salmon are revered by the Karuk Tribe and the Yurok Tribe, California’s second-largest Native American tribe.

The federally endangered fish species has suffered from low flows in the Klamath River in recent years and a parasite that's deadly to salmon flourished in the warmer, slower-moving water last summer, killing fish in huge numbers.

After years of negotiations, four dams on the lower river that impede the migration of salmon are on track to be removed next year in what would be the largest dam demolition project in U.S. history in an attempt to help the fish recover.