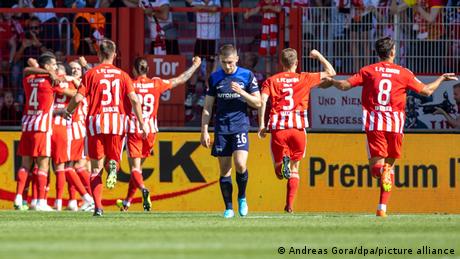 Union Berlin cruised to a comprehensive 3-1 derby victory against already beleaguered neighbors Hertha at a sun-soaked Stadion An der Alten Försterei (Stadium at the Old Forester's House) on the opening Bundesliga weekend.

Despite a summer of changes for the visitors, it was business as usual on the pitch as Union carved Hertha apart in just four passes to open the scoring in the 32nd minute, with Theoson Siebatcheu's flicked header earning him his maiden Bundesliga goal.

The home side pressed their dominance five minutes after the restart, when Sheraldo Becker outpaced Filip Uremovic and slotted past goalkeeper Oliver Christensen in front of a bouncing "Waldseite" terrace.

Union's current supremacy in this fixture was confirmed — even though there was a slight delay to celebrations while the video assistant referee (VAR) checked for offside — when Robin Knoche headed in Christopher Trimmel's corner.

Dodi Lukebakio outfoxed Andras Schäfer with some fancy footwork before driving home a consolation for Hertha five minutes from time, but it did little to dent the jubilation of the home crowd, celebrating a fourth derby win in a row.

Hertha had only survived the drop to Bundesliga 2 via a relegation playoff win over Hamburg at the end of last season, but any hope Hertha fans may have held ahead of the season of a fresh start has quickly been dampened.

Following the appointment of Sandro Schwarz (ex-Mainz 05) as head coach and former ultra Kay Bernstein as the new club president, Hertha's fans were promised the ushering in of a new era.

Bernstein praised the fans who had traveled to the Alte Försterei prior to the match, telling Sky: "We've suffered a lot recently, but look how many fans are still there. That gives us courage and confidence that we can turn this around, and then we'll see what's possible here."

From the kickoff, there looked to be few positives, with the visitors' lookback line enduring a torrid outing.

With all the bite and energy expected from an opening day of the season derby, Union continuously found joy on both flanks through Trimmel and Julian Ryerson.

Urs Fischer's side was rewarded for their exuberance in front of goal when Janik Haberer collected an indirect free kick from inside his own half. The midfielder's second touch found Becker on the left, and the striker's cross found deftly flicked by Siebatcheu into the back of the net.

Schwarz had claimed ahead of the derby that he wanted Hertha "to march ahead, to have charisma and to develop a group dynamic — that will be crucial."

But, whatever the halftime team talk in the Hertha dressing room may have been, it had no effect on the team's fortunes when they returned to the pitch.

Free-flowing Union would not be denied a second when Harberer fed Becker, who left Uremovic on the floor to race clear and double the home side's lead.

"We conceded goals far too easily," new captain Marvin Plattenhardt said. "These are exactly the problems we have to eliminate in the next few weeks. And we also have to step it up offensively so that we get more scoring chances."

But Hertha looked all at sea, and Union went for the kill — Konche heading in from Trimmel's precise corner, with Khedira's potential interference being ruled as not influential in the strike.

With Union slightly taking their foot off the pedal, Hertha were allowed a little more time on the ball, and Lukebakio converted a rare chance in front of goal, but, as in much of last season, it was too little too late.

"We've lost another derby, and nobody here likes that," Plattenhardt said, but, asked if Hertha were in an unstoppable downward spiral, he insisted:

"I do not see it that way. I think we've taken a step forward in preparation. We've developed as a team. We're lacking goals at the moment. We have to put that behind us and move on."