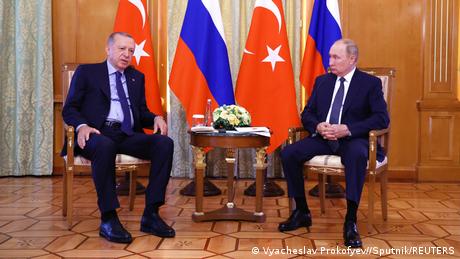 It is the second time the two have met in the two weeks since Turkey helped broker a deal to resume Ukraine's Black Sea grain exports that had been blocked by Russia's invasion. The agreement also allows Russia to export grain and fertilizer.

At the start of their talks on Friday, Putin thanked Erdogan for his help in securing the deal.

Earlier in the day, three ships carrying thousands of tons of corn left Ukrainian ports, following the departure of the first vessel on Monday.

Erdogan wants to translate the success into truce talks in Istanbul between Putin and Ukrainian President Volodymyr Zelenskyy.

"We discussed if the grain agreement could be an occasion for a sustainable cease-fire," Turkish Foreign Minister Mevlut Cavusoglu said after talks with his Russian counterpart, Sergey Lavrov, in Asia this week.

Kremlin calls on Turkey not to 'destabilise' Syria

A more contentious issue on the agenda is Turkey's planned incursion into northern Syria to target Kurdish fighters.

The plan, announced by Erdogan in May, has drawn criticism from Russia, Iran and the United States.

Ahead of Friday's meeting, the Kremlin called on Turkey not to "destabilize" Syria.

"Turkey has legitimate concerns for security reasons, which we, of course, take into account," Kremlin spokesman Dmitry Peskov told reporters.

Erdogan said he hoped the talks would open a "different page" in ties.

Putin told Erdogan on Friday that he was hoping to sign an agreement to boost trade and economic ties.

"I hope that today we will be able to sign a relevant memorandum on the development of our trade and economic ties," Putin said.

Turkey, a member of NATO, has criticized Russia's invasion and provided Ukraine with arms, but it has broken with Western allies by not imposing sanctions on Russia.

Amid a major economic crisis, with official inflation hitting nearly 80%, Turkey increasingly relies on Russia for trade and tourism.

Turkey depends heavily on Russia and Ukraine for grain.

Erdogan and Putin were also said to have discussed natural gas imports to Turkey from Russia and the Russian atomic agency's construction of Turkey's first nuclear power plant.

Erdogan said it was important that the Akkuyu nuclear plant in southern Turkey be completed on time.