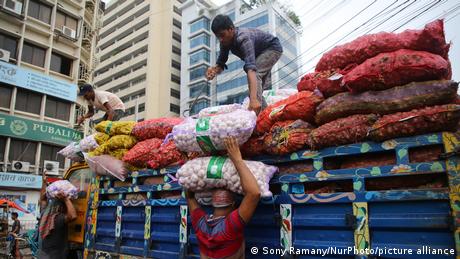 Bangladesh recently became the third country in South Asia, after Pakistan and Sri Lanka, to seek financial support from the International Monetary Fund (IMF) this year.

Dhaka is now reportedly also seeking assistance from the World Bank and the Asian Development Bank to overcome the economic challenges it has been facing in recent months.

This comes after the Daily Star newspaper reported that the country last week knocked on the doors of the IMF seeking $4.5 billion, including for budgetary and balance-of-payment support.

The IMF said Bangladesh wanted to tap the organization's new Resilience and Sustainability Facility, which is aimed at helping nations face challenges related to climate change and sustainability.

The Washington-based lender said Wednesday it is prepared to help Bangladesh with an aid program to face the current economic crisis, as well as financing for longer-term challenges.

"The IMF stands ready to support Bangladesh with this request," a fund spokesperson said in a statement, noting however that "the amount of support has not yet been discussed."

Why does Bangladesh need financial help?

"This is not a bailout package for Bangladesh, rather a precautionary move by the government," Ahsan Mansur, a former IMF economist and executive director of Dhaka-based Policy Research Institute, told DW.

However, he warned, if there's no improvement in the economic environment, the government will be forced to spend all its tax revenues to secure imports and will have little left for additional spending.

"Government expenditure is doubling. Shortly, all the earnings will be spent to meet the expense of imports, pensions and all other expenditures. The whole development budget will have to be borrowed," he said.

Bangladesh, a nation of over 160 million people, has had one of the fastest-growing economies in the world for years, but the nation has been hit hard by the global economic consequences of the Russia-Ukraine war.

The conflict, which began at the end of February, has compounded inflationary pressures.

The South Asian country has been particularly vulnerable as it imports significant amounts of essential items like cooking oil, wheat and other food stuffs, as well as fuel.

Soaring food and energy costs have inflated import costs and widened the current account deficit, which now stands at about $17 billion.

Bangladesh‘s currency, the taka, meanwhile, has slid against the US dollar by around 20% over the past three months, straining the nation's finances even further.

Putting further pressure are the dwindling foreign exchange reserves, which fell to about $39 billion as of July 20 — sufficient for just over five months worth of imports — from $45.5 billion a year earlier.

Meanwhile, utilities are struggling to source enough diesel and gas, resulting in frequent and lengthy power outages, sometimes for up to 13 hours a day.

Authorities say diesel power plants across the country have been taken off the grid, while some gas-fired plants remain idle.

The government has imposed measures such as electricity rationing, import curbs and cuts to development spending to tackle the situation.

It has also urged tens of thousands of mosques to curtain the use of air conditioners to ease pressure on the power grid.

The blackouts have hit industrial activity and triggered public protests.

Mohammed Helal Uddin, an economics professor at Dhaka University, said that the economy is facing a crisis.

"We are rationing electricity, the forex reserves have gone down and cost of imports has risen dramatically. We have cut back on fuel imports and the currency value is down. These are all indicators that the economy is suffering," he told DW.

The expert stressed that Bangladesh won't be able to reduce its imports for a long time and it should instead focus on boosting exports to overcome the current crisis.

"However, the whole world is facing economic problems and we don't know when the situation will be normal again. So, I don't see any other option than taking a loan for now just to ease the pressure on foreign reserves," he added.

Bangladesh is not alone in facing such problems in South Asia. Other nations in the region like Pakistan and Sri Lanka are also struggling with galloping inflation and deteriorating public finances triggered by global economic headwinds.

Bangladesh's Finance Minister A.H.M. Mustafa Kamal, however, said on Wednesday that the currency and inflation would stabilize in a month. He stressed that the economy would soon get back on track.

The opposition Bangladesh Nationalist Party, meanwhile, has blamed the government for the fragile economic situation, accusing it of wasting billions of dollars on vanity projects.

The ruling Awami League party denies the criticism and points to the steps it has taken to slash spending and save foreign currency reserves.

While loans from bodies like the IMF usually come with strings attached, Mansur said Dhaka might not be willing to undertake unpopular policies such as cutting back on fuel subsidies.

"Raising fuel and other prices will be unpopular decisions, which the government might not be interested in. As a whole, I don't think the Bangladeshi government is interested in reforming the economic and banking sectors," he said.

Finance Minister Kamal said the government would take a loan from the IMF only if conditions are favorable and underlined that the country's macroeconomic conditions were still in order.

"If the IMF conditions are in favor of the country and compatible with our development policy, we'll go for it, otherwise not," Kamal said. "Seeking a loan from the IMF does not mean Bangladesh's economy is in bad shape," he added.