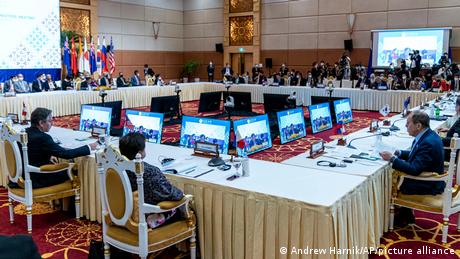 Foreign ministers of several Southeast Asian nations on Friday issued their final communique, which criticized fellow member Myanmar for a lack of action in ending violence in the country. The language, however, was weaker than most members had hoped for.

Myanmar's military government declared a state of emergency in February 2021, after a coup ousted a democratically elected government under Aung San Suu Kyi. In the months that followed, the military junta has been accused of thousands of extrajudicial killings.

Last week, Myanmar carried out its first official executions in decades, causing an outcry across the world. ASEAN's current head, Cambodia — which is renowned for not interfering in what it deems the domestic affairs of other countries — even voiced concern.

Leaders of the Association of Southeast Asian Nations (ASEAN) held a series of meetings in the Cambodian capital of Phnom Penh this week, releasing a communique that criticized recent developments in Myanmar.

"We extensively discussed the recent developments in Myanmar and expressed our concerns over the prolonged political crisis [...] including the execution of four opposition activists," the communique issued by ASEAN leaders said.

Cambodia currently holds the rotating chairmanship of ASEAN, a group also including the Philippines, Malaysia, Indonesia, Laos, Singapore, Thailand, Vietnam and Brunei, in addition to Myanmar.

However, Myanmar's military government has been barred from attending the bloc's meetings since late last year over a lack of progress in implementing a peace plan outlined by ASEAN. Myanmar refused offers for nonmilitary officials to attend instead.

In preliminary discussions leading up to the main meetings, a lower-level representative from Myanmar took part to express objections to the proposed wording of the communique. This led to the exclusion of stronger criticism proposed by Malaysia, Singapore and others.

However, the group made a veiled warning to Myanmar's junta, referencing Article 20 of the ASEAN charter, noting that the leaders' meeting later this year could still take action over "noncompliance."

While ASEAN decisions are usually taken by consensus, Article 20 allows a summit to override this.

This week’s meetings on regional security were also attended by top diplomats from the US, China, Russia, Japan and Australia, despite heightened tensions over US House Speaker Nancy Pelosi's visit to Taiwan and Russia's invasion of Ukraine.

On Myanmar, US Secretary of State Anthony Blinken urged the international community to reject the Myanmar junta's "sham elections" planned for next year.

Chinese Foreign Minister Wang Yi and Blinken refused to meet each other in Phnom Penh after China warned of "targeted military actions" in response to Pelosi visiting the self-ruled island that Beijing claims as part of its territory.

On Friday, Wang and Lavrov walked out of a meeting when their Japanese counterpart spoke. The Chinese leader also canceled a meeting with Japan's Yoshimasa Hayashi, citing displeasure over a G7 statement urging Beijing to resolve tension over Taiwan peacefully.

However, during their meetings, ASEAN foreign ministers warned against "provocative action."

The situation "could lead to miscalculation, serious confrontation, open conflicts and unpredictable consequences among major powers," they said in a joint statement released a day earlier.