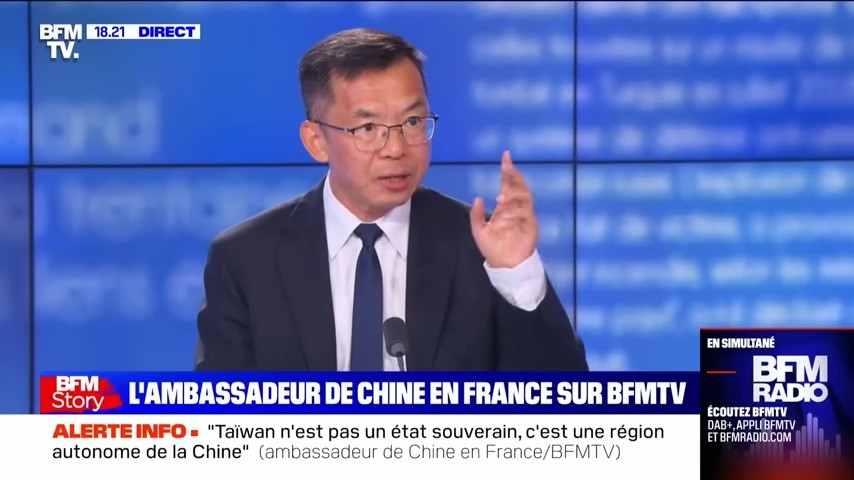 During an interview with French station BFMTV to discuss U.S. House Speaker Nancy Pelosi's visit to Taiwan, Lu described her trip as an “unnecessary provocation” that had “created a lot of danger." He claimed that China's live-fire drills were "responding to a provocation" — alluding to Pelosi's trip to Taiwan.

Referring to Taiwanese aversion to Chinese annexation, Lu said: “Ten years ago, 20 years ago, the majority of the population of Taiwan was for reunification, but why, now, are they against it? It’s because the Democratic Progressive Party has spread a lot of anti-Chinese propaganda."

However, according to the Election Study Center at National Chengchi University, there has never been a majority of Taiwanese who supported unification since polls began on the question in 1994.

Lu then said the possibility of a military invasion of Taiwan "is still there" but added the assault would "not be against the population of Taiwan." He then vowed that "after reunification, we will do reeducation."

The ambassador said the reeducation campaign would be peaceful and "not under threat." He then tried to reassure Taiwanese that it would not take the form of "mass" education.

Nathalie Loiseau, chair of the European Parliament's Subcommittee on Security and Defense, on Thursday (Aug. 4) tweeted that those who are against Pelosi's trip to Taiwan should reserve their indignation for the "scandalous remarks of the Chinese ambassador, who promises the reunification of Taiwan against the will of its inhabitants and then their 'reeducation.' This is where the scandal lies."

Guy Verhofstadt, former prime minister of Belgium, also took to Twitter to write: "Dictatorships cannot accept or even imagine people wanting to live in freedom … instead they want to 're-educate' … another word for oppression and propaganda. Be warned, Taiwan, Ukraine, Europe …"

Paul Massaro, a senior policy advisor for counter-corruption and sanctions to the U.S. Congress, lambasted Lu on Twitter by stating on Thursday: "Genocide, reeducation, gulags, all being normalized for a new age of totalitarian evil."

Abdul Hakim, Director of the Center for Uyghur Studies, on Friday (Aug. 5) said on Twitter that for the past five years, he and his colleagues have worked hard to tell the world that China is "using Uyghurs as test subjects with a plan to transfer their genocidal tactics to other parts of the world."

Meanwhile, Rayhan E. Asat, a Uyghur human rights lawyer living in the U.S., tweeted to say he had stayed away from the Taiwan controversy over the past few days, but became concerned by Lu's comments:

"What drove Hongkongers to the street is the fear Hong kong would become next Xinjiang reeducation center. The Chinese official says Taiwanese also needs to undergo reeducation. Says a lot about China."