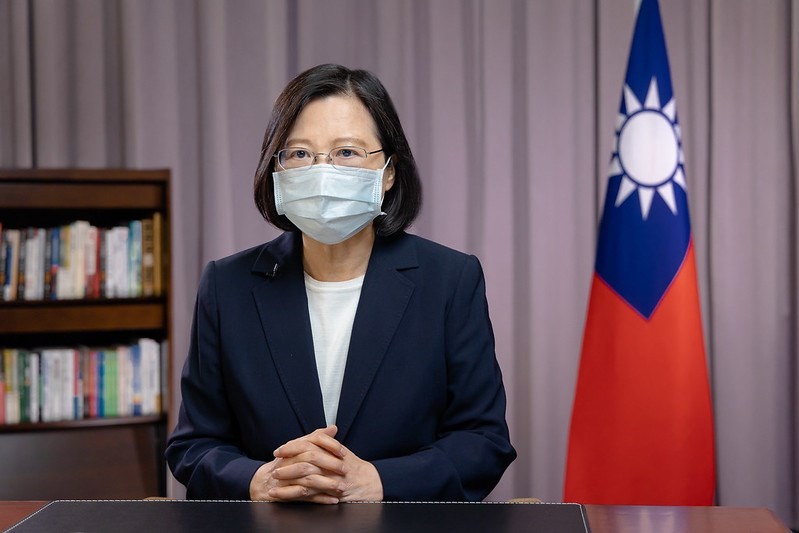 TAIPEI (Taiwan News) — Taiwan President Tsai Ing-wen (蔡英文) on Thursday (Aug. 4) condemned the unprecedented launching of live-fire drills in six zones around Taiwan as "irresponsible" and vowed to defend Taiwan's sovereignty and security as a "bulwark of democracy and freedom."

From 1:56 p.m. to 4 p.m. on Thursday, the People's Liberation Army (PLA) launched 11 Dongfeng ballistic missiles into the waters surrounding northern, southern, and eastern Taiwan in waves, according to the Ministry of National Defense. The Japanese Defense Ministry also announced that five ballistic missiles launched by China landed in Japan's exclusive economic zone (EEZ) and four had flown over Taipei.

In a televised speech, Tsai denounced the "dangerous launch of missiles into some of the busiest transportation corridors in the world" as "irresponsible." She said this undermines both the status quo in the Taiwan Strait and the country's sovereignty.

The president emphasized that live-fire drills heighten tensions in the Indo-Pacific region as they present an "unprecedented threat" to air and maritime safety and international trade. She then urged China to "act with reason and exercise restraint."

Tsai said Taiwan will "neither escalate nor instigate disputes." The president then vowed to "resolutely defend our nation's sovereignty and security as a bulwark of democracy and freedom."

She said that Taiwan's armed forces are in a state of heightened readiness and are closely monitoring the military developments around the country. Tsai pointed out that Taiwan is in close communication with its allies and is coordinating with them to stem any further escalation of the regional security situation.

According to Tsai, Taiwan's national security agencies are monitoring the situation and coordinating with other government departments to ensure that flight and shipping routes remain open and that airports and seaports continue to operate. She called on Taiwanese citizens to rest assured that the government is "responding with a steady hand."

Tsai reached out to the international community and highlighted Taiwan's role in maintaining a peaceful status quo in the Taiwan Strait. She said, "We are calm and will not act in haste. We are rational and will not act to provoke. But we will absolutely not back down."

The president called on the international community to back Taiwan and join forces in ending these "unilateral and irrational military actions." She pledged to work with regional democratic partners across the globe to maintain peace in the Taiwan Strait and the region.

She warned Taiwanese that China will likely launch "intensive information warfare operations," including cyberattacks and attempts to cause "psychological unrest" through disinformation campaigns. To deal with the cyberattacks, Tsai has directed government agencies to be on a heightened state of alert, and to combat information warfare, she called on the media to be "even more meticulous when fact checking."

Alluding to a statement issued by the G7 reiterating their commitment to peace and stability in the Taiwan Strait, Tsai thanked the G7 and friendly nations for their support. She said that Taiwan will do its part to maintain the status quo and expressed a desire for a peaceful resolution by saying "we remain open to constructive dialogue."

Tsai closed by saying, "Taiwan does not give in to challenges, and it never will." She called on all citizens and political parties to join together to defend Taiwan's territory, sovereignty, and democracy.