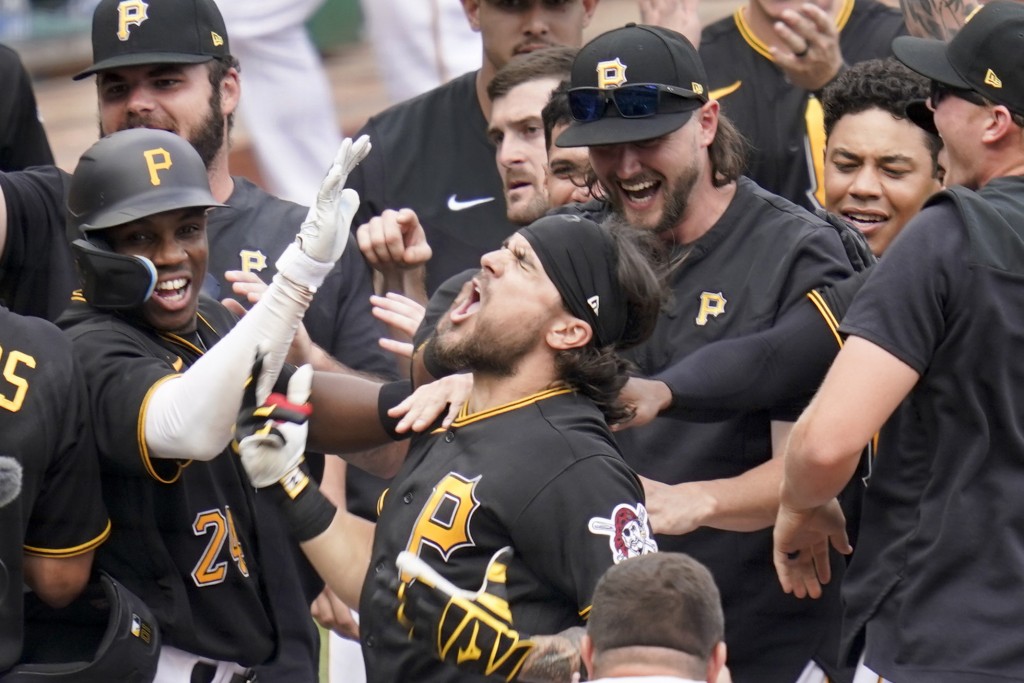 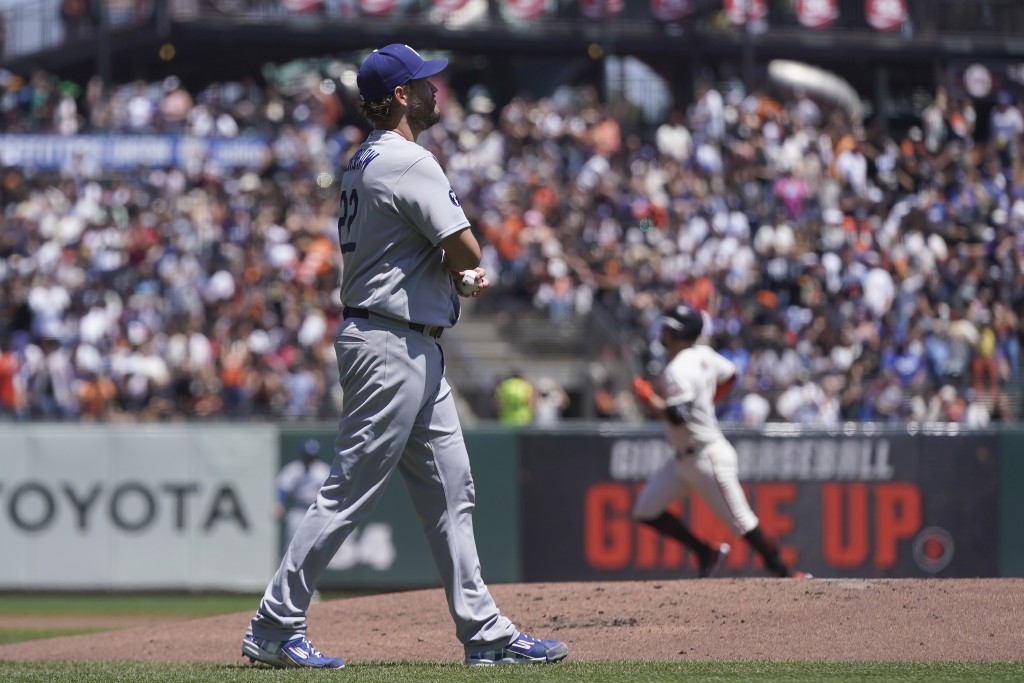 SAN FRANCISCO (AP) — Clayton Kershaw left his start with low back pain and the Los Angeles Dodgers went on to beat the San Francisco Giants 5-3 on Thursday to complete a four-game sweep.

Kershaw appeared to feel discomfort while he was warming up before the bottom of the fifth inning. The three-time NL Cy Young Award winner winced and pointed to his dugout, and then walked off the field gingerly with a trainer.

Mookie Betts and Trea Turner homered for Los Angeles, which completed its first four-game sweep in San Francisco since 1977. The majors-leading Dodgers have won eight straight games against the Giants, matching the longest streak in Los Angeles history.

Chris Martin (2-0) got the win, and Craig Kimbrel earned his 20th save.

ANAHEIM, Calif. (AP) — The Angels tied a major league record with seven solo homers, including two by Shohei Ohtani, but still lost to the Athletics.

The Angels are the first team in the majors to hit seven solo homers and score no other runs in a game. They’re also the sixth team to hit seven homers and lose, according to STATS.

The Padres didn’t give the crowd a lot to cheer about compared to Wednesday night, when a sellout crowd gave Soto multiple ovations in his first game with San Diego.

Soto did have a triple and double and scored one run Thursday. The 23-year-old superstar got a break on a triple off Kyle Freeland (7-7) leading off the sixth when right fielder Charlie Blackmon and center fielder Yonathan Daza let his fly ball fall in between them while Soto chugged around the bases.

Verlander (15-3), making his comeback from Tommy John surgery, extended his winning streak to seven starts and moved into a tie with Herb Pennock for 55th place all-time with 241 victories. He gave up two hits, both singles, and struck out five. Will Smith, Ryne Stanek and Phil Maton completed the three-hitter, helping Houston move within 1 1/2 games of the idle Yankees for the best record in the AL.

NEW YORK (AP) — Deadline acquisition Tyler Naquin homered twice in his home debut, Edwin Diaz locked down his first two-inning save as a pro and New York beat Atlanta to open a pivotal five-game series between the NL East rivals.

Pete Alonso and Daniel Vogelbach hit back-to-back homers in the third for the Mets, who extended their lead over the Braves to 4 1/2 games. Alonso, who began the scoring with a single in the first, finished with three RBIs.

Naquin, acquired from the Cincinnati Reds last Friday, hit solo shots in the second and sixth off Kyle Wright. It was the fifth career two-homer game for Naquin and his first since he went deep twice for the Reds against the Miami Marlins on Aug. 22, 2021.

Carlos Carrasco (12-4) extended his scoreless streak to a career-high 23 1/3 innings, allowing three runs on four hits and one walk with six strikeouts in six innings.

PITTSBURGH (AP) — Bryan Reynolds raced home on a wild pitch with one out in the 10th inning, helping the Pirates complete a three-game sweep.

Reynolds tied it earlier in the inning when he hit a ground-rule double down the right-field line off Matt Bush (2-2). Reynolds moved to third on a fly to right field by Ke’Bryan Hayes and raced home when a pitch from Bush slipped by catcher Victor Caratini to give the Pirates their third comeback win over first-place Milwaukee in as many days.

The Brewers have lost four straight since dealing All-Star closer Josh Hader to San Diego over the weekend.

Pittsburgh trailed 3-1 in the seventh but pulled even behind RBI singles by Maracano and Gamel.

The Cardinals won the opener as Lars Nootbaar hit a tying sacrifice fly in the seventh inning and a game-ending RBI single in the ninth.

Quintana, traded from the Pittsburgh Pirates to St. Louis on Monday, surrendered one run, one hit and two walks and struck out seven batters in six innings in a no-decision debut with the Cardinals, who have won four straight and are tied for first place in the NL Central with Milwaukee.

Jordan Hicks (3-5) allowed a run on a hit and two walks, and Génesis Cabrera and Chris Stratton each tossed a scoreless inning in relief in the combined two-hitter.

In the opener, St. Louis trailed 3-0 before rallying in the seventh against Marcus Stroman. Nolan Gorman and Paul Goldschmidt hit back-to-back homers before Nolan Arenado doubled and scored on Nootbaar’s flyball to center.

Nootbaar singled in Arenado in the ninth against Erich Uelmen (0-1).

Ryan Helsley (6-1) got three outs for the win, helping the Cardinals pull within a half-game of Milwaukee for the NL Central lead.

DETROIT (AP) — Brandon Lowe had a two-run home run among his three hits and drove in three runs as Tampa Bay beat Detroit.

Randy Arozarena had four hits for Tampa Bay, which won back-to-back games for the first time since the All-Star break.

Rays starter Jeffrey Springs (4-3) picked up the win, allowing two unearned runs in six innings. He struck out six without walking a batter.

Rhys Hoskins also went deep, helping secure a victory for Syndergaard (6-8) two days after he was acquired from the Los Angeles Angels.

The Phillies began play a half-game ahead of St. Louis for the final NL wild-card spot. They have won seven of nine against Washington this season.

Luke Voit and Yadiel Hernandez each had two hits for the Nationals, who dropped to an MLB-worst 36-71 while playing their third game since trading star slugger Juan Soto. The 2019 World Series champs have dropped six of eight.

Syndergaard struck out two and walked none over five innings. His 11 hits allowed were one shy of his career worst.

Paolo Espino (0-4) gave up five runs on seven hits in four innings with three strikeouts and no walks.

Whit Merrifield had two hits in his Blue Jays debut after being acquired from Kansas City for two minor leaguers at the trade deadline. He revealed earlier in the day that he’s now vaccinated against COVID-19 and cleared to play in Canada,

Toronto won for the 12th time in 15 games and got six effective innings from Alek Manoah (12-5), who allowed two runs on two hits but tied a season high with four walks.

Twins starter Sonny Gray also had a no-hitter working into the middle innings before Cavan Biggio had a two-out single in the fifth. Gray was done after five innings, giving up just one hit, but he walked a season-high five batters. Emilio Pagán (3-5) relieved Gray and allowed three runs — two earned — on four hits in an inning.

ARLINGTON, Texas (AP) — Meibrys Viloria had a tiebreaking pinch-hit single in the seventh inning and Texas beat Chicago as the Rangers became the first team since 1986 to have two of its first-round picks make their big league debuts as starters in the same game.

Left-hander Cole Ragans, who twice had Tommy John surgery after being their first-round pick in 2016, allowed one unearned run over five innings in his debut. Bubba Thompson, the team’s first pick in 2017, was 1 for 3 with a bunt single in his first big league game after being called up earlier in the day to play left field and bat ninth.

Brock Burke (5-2) struck out four in two scoreless innings after taking over for Ragans, who struck out three, walked four and allowed three singles in a 93-pitch debut. Jonathan Hernandez pitched the ninth for his second save in two chances.

Leody Taveras had an RBI single for the Rangers, who ended a seven-game home losing streak.

White Sox starter Johnny Cueto (4-5), unbeaten in his last six starts, gave up three runs and 11 hits. He struck out four without a walk while pitching the entire game.

Perez’s blast in the seventh inning appeared to hit the wall below a railing in left field. The play was reviewed and the original call stood. The call prompted Boston manager Alex Cora to argue with home plate umpire Bill Welke, who tossed Cora.

Bobby Witt Jr. broke a 3-all tie with an RBI single prior to Perez’s home run.

Taylor Clarke (3-1) earned the win, despite blowing the lead in the top of the seventh. Darwinzon Hernandez (0-1) took the loss, allowing four runs in the seventh.