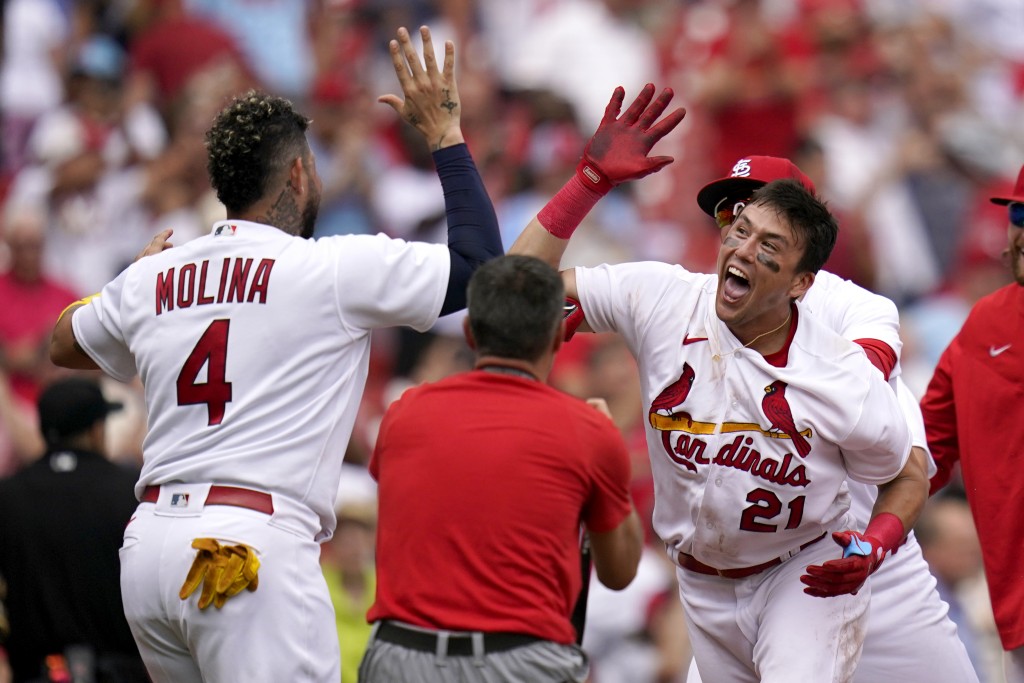 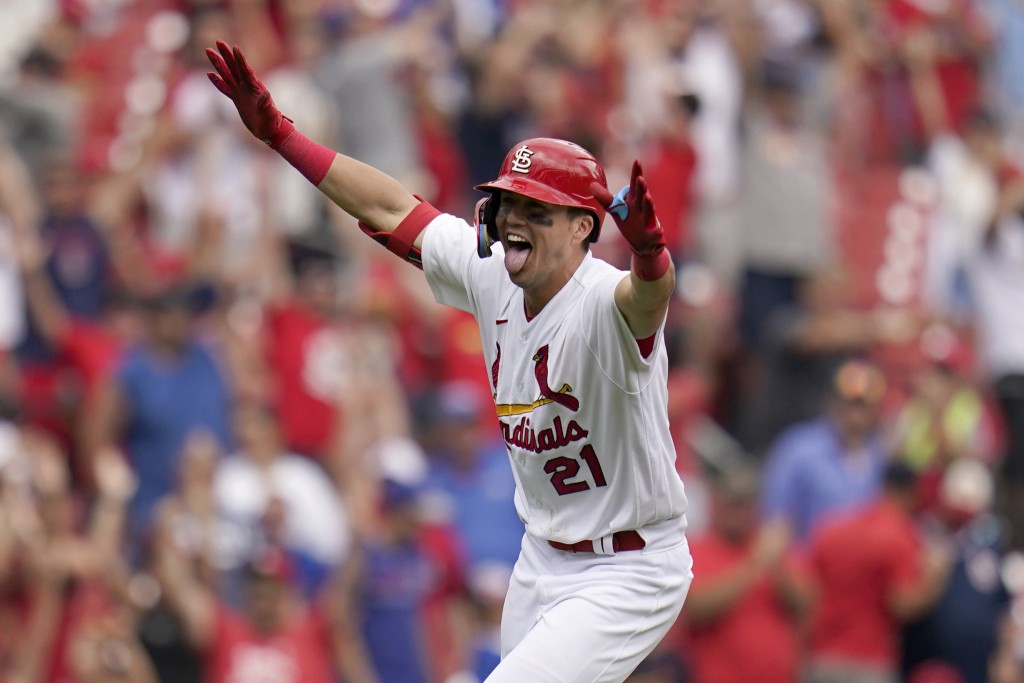 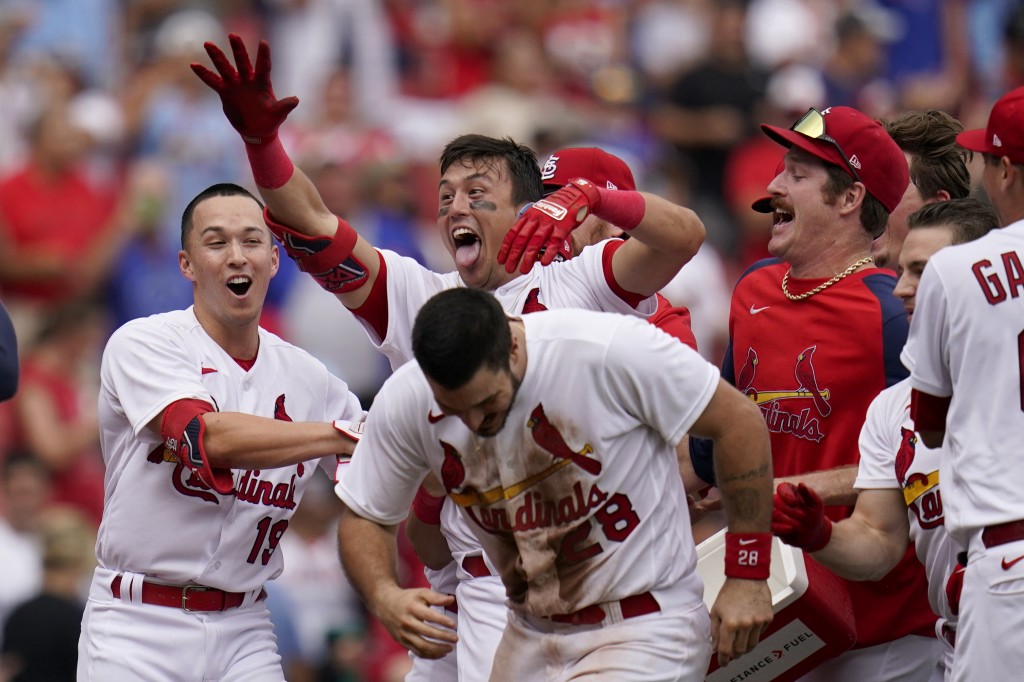 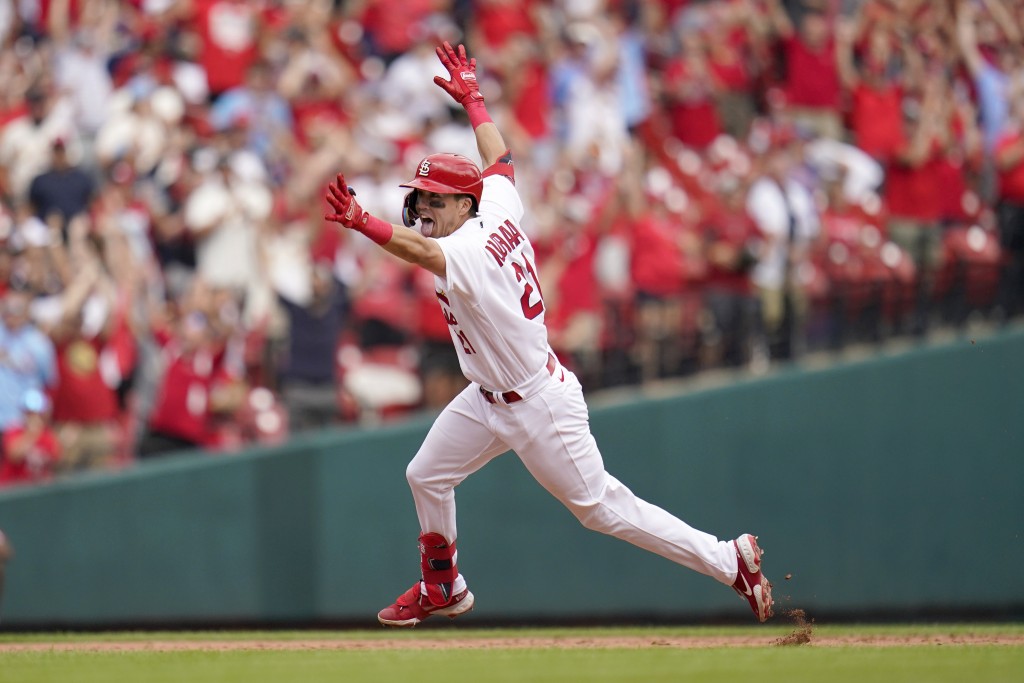 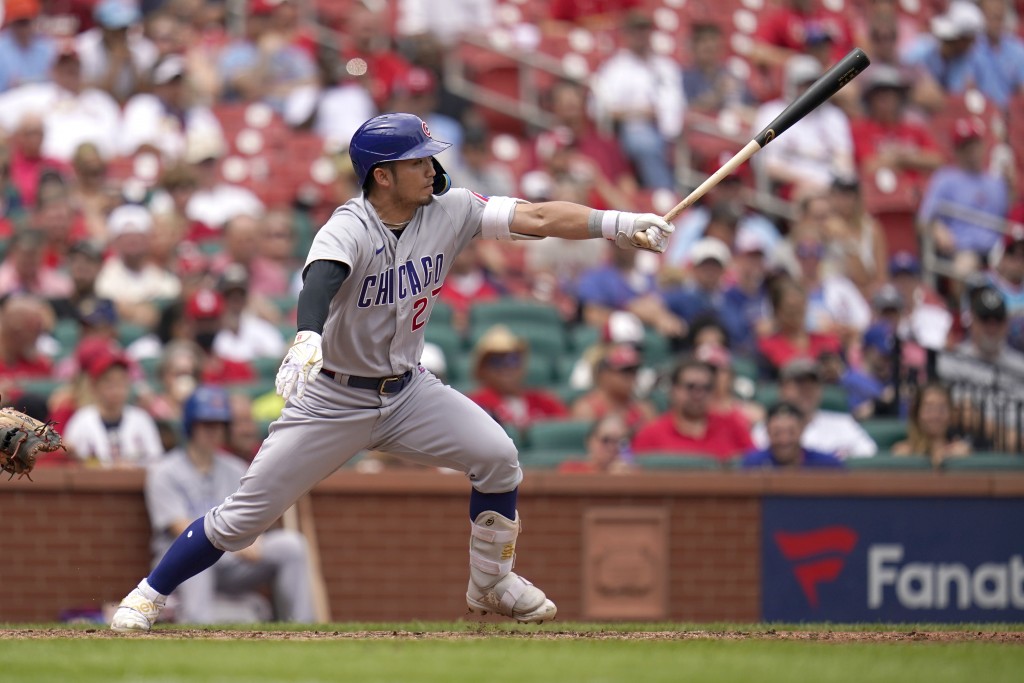 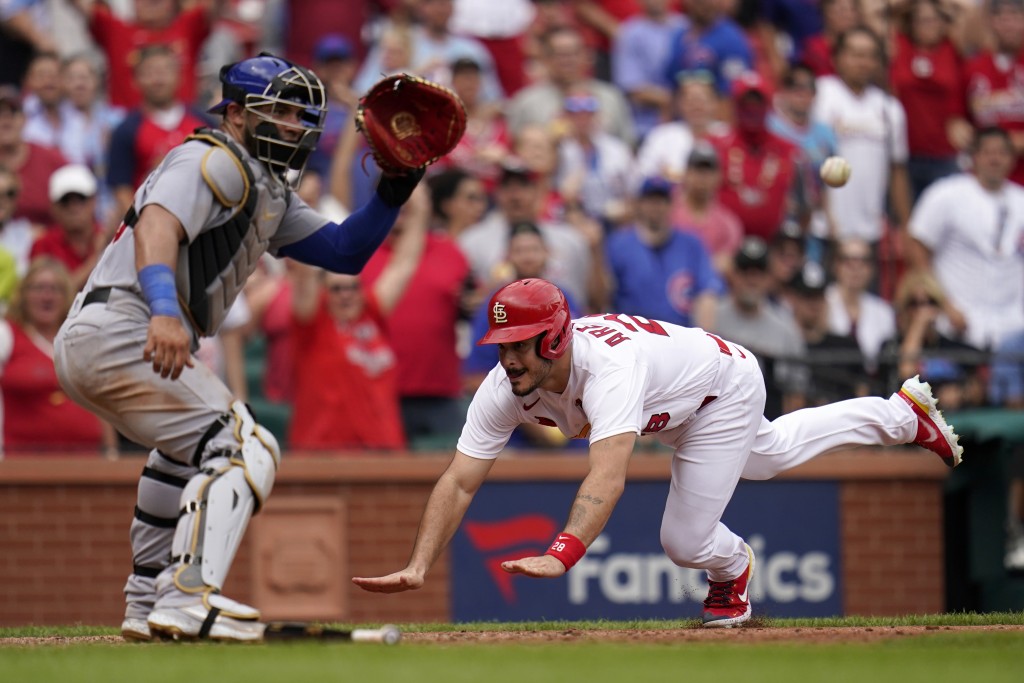 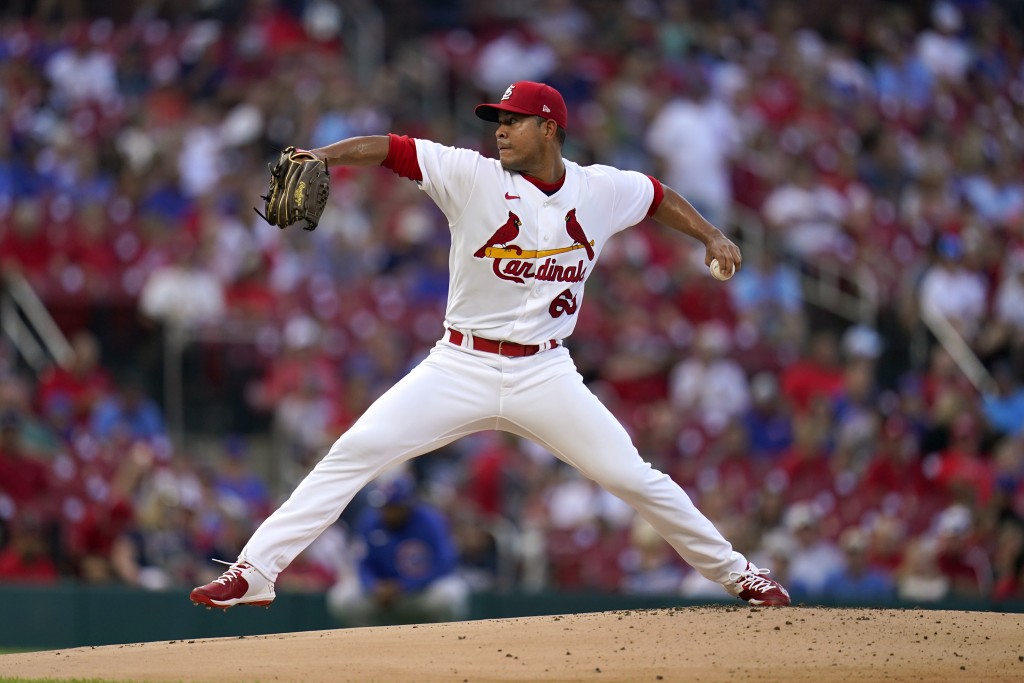 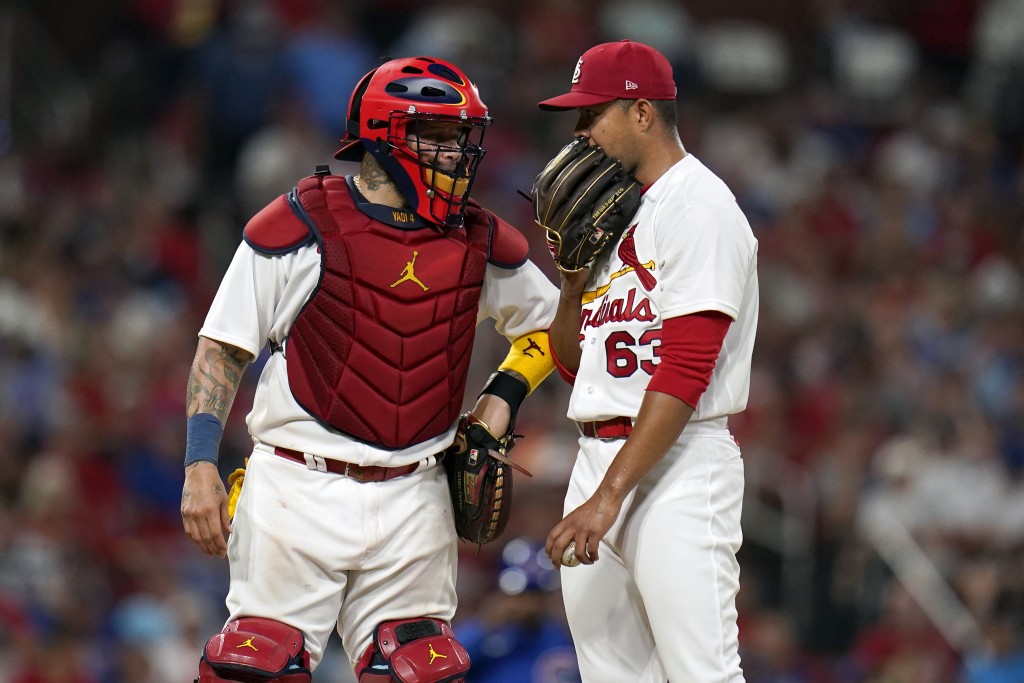 The Cardinals won the opener 4-3 as Lars Nootbaar hit a tying sacrifice fly in the seventh inning and a game-ending RBI single in the ninth.

“It's tough to win two games," Cardinals manager Oliver Marmol said. “The guys came in, and they were determined to take both of those games one at a time, and they executed.”

Quintana, traded from the Pittsburgh Pirates to St. Louis on Monday, surrendered one run, one hit and two walks and struck out seven batters in six innings in a no-decision debut with the Cardinals, who have won four straight and are tied for first place in the NL Central with Milwaukee.

“You look into the eyes of the Quintanas of the world before that game starts and it will give you goosebumps how bad he wants it," Marmol said. “You look at anybody on the club right now. There's a really good feeling going around. The guys are determined. It would be a fun little run."

Jordan Hicks (3-5) allowed a run on a hit and two walks, and Génesis Cabrera and Chris Stratton each tossed a scoreless inning in relief in the combined two-hitter.

Sean Newcomb allowed two runs on five hits in three innings serving as an opener in his first major league start since Aug. 10, 2020, at Philadelphia as a member of the Braves.

O’Neill hit a three-run home run, his sixth of the season, off Kervin Castro (0-1) in the bottom of the seventh inning to break a 2-all tie.

“Rounding the bases, I blacked out a little bit," O'Neill said. “It was a really good feeling for me. I was able to let a little emotion out in the dugout, and the boys were fired up for me.”

Nelson Velázquez tied the game when he drove in Patrick Wisdom on an infield single that ricocheted off Hicks’ glove in the top of the seventh.

Arenado hit his 21st home run of the season into the third deck in left field to give the Cardinals a 2-1 lead.

Wisdom hit his 20th home run of the season in the first inning against his former team.

“It's pretty rad,” Wisdom said about reaching the 20 home run mark. “I guess I didn't really feel the weight of that, but it's definitely really special.”

In the opener, St. Louis trailed 3-0 before rallying in the seventh against Marcus Stroman. Nolan Gorman and Paul Goldschmidt hit back-to-back homers before Arenado doubled and scored on Nootbaar’s flyball to center.

“When it all clicks, we’re able to string together some quality at-bats,” Marmol said. “Those guys there definitely made an adjustment on Stroman and made some really hard contact. Classic third time through the lineup.”

Arenado and Paul DeJong walked with one out in the ninth against rookie Erich Uelmen (0-1). Nootbaar then drove in Arenado with a liner to right on a 2-2 pitch.

Contreras hit his 15th home run of the season in the first inning for Chicago, and Stroman was charged with three runs and five hits in 6 2/3 innings.

“I thought he had command of both sides of the plate. He was sharp,” manager David Ross said. “It was a really nice performance today I thought.”

The doubleheader was scheduled after Wednesday night’s game was postponed by rain. St. Louis improved to 6-2 in its four doubleheaders this season, and Chicago (41-63) dropped to 1-9 in its five doubleheaders.

The Cubs added two more in the sixth against Miles Mikolas. Contreras doubled and scored on Seiya Suzuki’s single, and Wisdom added a sacrifice fly.

Mikolas allowed seven hits, struck out six and walked one in 6 1/3 innings.

Albert Pujols made his 12,884th career plate appearance when he grounded into a fielder’s choice in the fifth inning of game two. He moved past Cal Ripken, Jr. to have the sixth-most plate appearances in MLB history.

Ross challenged both out calls on Nico Hoerner's game ending double play in the nightcap. Crew chief Marty Foster announced that Wisdom's out at second base stood, while Hoerner's out at first base was confirmed.

Major League Baseball announced that the Cardinals and Cubs will play a two-game series in London in June.

Cubs: LHP Matt Dermody was recalled from Triple-A Iowa to serve as the 27th man for the split doubleheader. Dermody, 32, is 6-3 with a 3.74 ERA in 20 games (13 starts) for Iowa this season. ... INF David Bote was optioned to Iowa to create a roster spot for Newcomb, who was

Cardinals: Added RHP James Naile as the 27th player for the doubleheader. Naile relieved Mikolas in the seventh and got two outs. Prior to game two LHP Jordan Montgomery was added to the active roster, and LHP Zack Thompson was recalled from Memphis. Montgomery was acquired from the New York Yankees Tuesday in exchange for OF Harrison Bader.

Cardinals: RHP Drew VerHagen (right hip impingement) will have hip surgery soon. ... LHP Steven Matz (torn left MCL) will not need season-ending surgery and instead will rehab. There is no timetable on when he will be back.

Cubs: On Friday, LHP Justin Steele (4-7, 3.86 ERA) will make his 20th start of the season in the opener of a three-game series against Miami. Miami has not announced a starting pitcher.