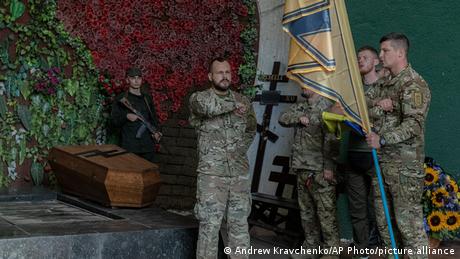 Russia's top court has designated Ukraine's Asov Regiment a terrorist organization. It has now been added to a long list of terrorist groups compiled by Russian domestic intelligence agency FSB, alongside al-Qaida, the Taliban and others.

The Asov Regiment originally grew out of a controversial right-wing extremist volunteer battalion. These days, Asov has been absorbed into Ukraine's national guard, which answers to the interior ministry. Russia has sought to legitimize its invasion of Ukraine claiming it needs to fight Asov.

Ukraine's Asov Regiment used to be headquartered in Mariupol on the Sea of Asov. The city was captured and remains under Russian control since May. Ukraine says over 2,500 Asov fighters, who remained in the city defending its steel plant, are now in Russian captivity. Russia says 2,439 Asov members had surrendered to its forces. Recently, 50 Asov fighters held in a prison in Olenivka, Russian-held Donbas, were killed after an attack. The exact circumstances of their deaths remains disputed, with Russia and Ukraine blaming each other.

It took Russia's top court a mere three hours to deliberate over and approve the request by Russia's public prosecutor to designate Asov a terrorist organization. The meeting was held behind closed doors.

Despite this secrecy, pro-Kremlin media claim to know who gave testimony in this case. Georgiy Volkov, who heads the public monitoring commission, which looks into human rights issues and prisons, supposedly quoted a captured Asov fighter who said the regiment had practiced cannibalism. In addition, journalist Marina Akhmedova supposedly told the court she had conducted research in Mariupol and Volnovakha, Donetsk Oblast, and learned from witnesses that Asov fighters had tortured and executed civilians. Media reports quote her as having said this torture was born out of deep-rooted hatred.

Tough sentences on the horizon

The Moscow-based Center for Information and Analysis, which researches nationalism and racism in post-Soviet Russia, is urging people to carefully check their online behavior and ensure they do not follow any groups somehow linked to "terrorist" or "extremist" organizations.

Symbols associated with the Asov Regiment were classified as terrorist insignia as far back as 2015. Displaying them can lead to 15-day jail terms.

"It sounds somewhat strange: a country that is close to being classified as a state sponsor of terrorism, which violates all rules and conventions of war, is now designating this [Ukrainian] organization as terrorist," says Ukrainian presidential adviser Mykhailo Podolyak. This decision, he adds, has no bearing on the real world and will not impact negotiations over prisoner swaps. "This move is nothing but internal propaganda."

Yegor Chernev, a member of Ukraine's governing Servant of the People party, tells DW he thinks Russia's move aims to remove Geneva Convention protection for Asov fighters. Volodymyr Aryev, an MP with the opposition European Solidarity party, agrees. He says Kyiv urged the world to designate Russia an aggressor as early as 2015.

In response to Russia's move, the Ukrainian military declared: "After the public execution of Asov Regiment POWs in Olenivka, Russia is seeking out new ways to justify its war crimes."

The Asov Regiment itself has called on the US and other countries to declare Russia a "terrorist state." In a statement, the group said "Russia's army and intelligence services commit war crimes ever day; tolerating or remaining silent on this equals complicity."

The head of the Ukrainian Center for Civil Liberties, Oleksandra Matviichuk, who was involved in talks to arrange previous prisoner swaps, tells DW the "Asov Regiment belongs to the national guard — branding it a terrorist organization would be like designating all of Ukraine's armed forces a terrorist organization, when in fact, they are protecting our country against invading terrorists."