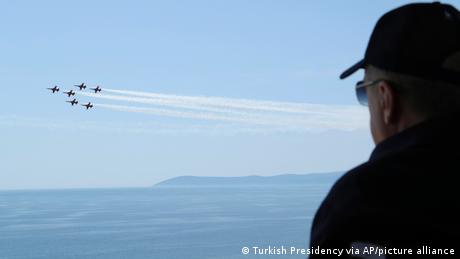 The saber-rattling in the Mediterranean may seem puzzling. After all, both Turkey and Greece are members of the same defense alliance — NATO. And that alliance was established to come together and defend any member facing a common foe. But nevertheless, these two neighbors often appear to be on the threshold of a mutual conflict.

The size of Greece's defense budget shows how threatened it feels: At 3.8% of its annual budget it spends more on defense than any other NATO member.

Tensions often run high in quarrels over the islands of the eastern Mediterranean. It's about competing claims over maritime frontiers, and not least over precious resources like oil and gas.

Back in 1996 differences over the tiny and uninhabited island of Imia saw the two sides edging to within a hair's breadth of going to war. And in 2020 there was another serious escalation in yet another dispute over territory. Next week, a Turkish drilling ship will set out to seek natural gas.

Time and again, NATO leaders have been forced to step up and prevent clashes. In 2020, former German Chancellor Angela Merkel had the backing of fellow EU leaders when she stepped in to play a key role in arbitrating between the two countries again at loggerheads.

Now, Turkey questions Greece's sovereignty over a number of islands in the eastern Aegean: Rhodes, Lesbos, Samos, and Kos. Greece points to the fact that Turkish jets have been ordered out almost on a daily basis to fly over Greek islands.

Turkey looks to the Treaty of Lausanne from 1923, which mapped out the current border after the Greek-Turkish War and gave Greece control over die Islands of Lesbos, Chios, Samos, and Ikaria. The Treaty of Paris from1947, after World War II, Italy ceded Dodecanese Islands to Greece. The treaties also called for the islands to be demilitarized.

But Greece justifies the presence of troops on the islands with the need for self-defense in the view of landing boats positioned on the Turkish west coast.

Extremist fervor on both sides

Even if the confrontation has a long tradition, the recent show-down was particularly fierce. Devlet Bahceli, the leader of Turkey's nationalist MHP party and coalition partner of Präsident Erdogan's AKP, had allowed himself to be photographed wielding a map showing all the key islands of the eastern Aegean including the biggest island, Crete, marked as Turkish territory.

Domestic issues are also firing up politicians on all sides. Turkey will next year be holding presidential and parliamentary elections. Erdogan and his AKP supporters fear the polls could deliver a massive setback. Rampant inflation is driving the country to ruin. So, the tendency is to put the emphasis on foreign policy to distract people from their very real concerns.

But there is saber-rattling on the Greek side, too, even if it isn't ordinarily carried out by members of the government. On Greek TV former Vice-Admiral, Yiannis Egolfopulos, lets off steam, describing how the Turks should be taught a lesson: "Just let the Turks make the first move, then they will experience something the likes of which they have never known."

So, what is Germany's position on this dispute? On the question of the sovereignty of the Islands, German Foreign Minister Annalena Baerbock did not mince her words during her most recent visit to both countries: "Greek islands are Greek territory and nobody has the right to question this," she said.

This prompted her Turkish counterpart Mevlut Cavusoglu to complain that Germany is no longer neutral. He went on to say that under former Chancellor Angela Merkel "Germany was an honest broker. Germany's policies were fair." But more recently, he said, "this sense of balance is, unfortunately, being lost."

Greece, however, also feels that Germany is not giving it a fair deal. Greek Foreign Minister Nikos Dendias has harshly condemned German arms exports, including the sale of submarines to Turkey: "There is a real danger that these submarines will be used to undermine the balance of power in the Mediterranean," he warned.

When it comes down to it, Germany is really only playing a secondary role in the conflict. Both the Greek and Turkish heads of state and government are above all seeking Washington's backing in the ongoing rivalry.

Initially, it appeared that Greek Prime Minister Kyriakos Mitsotakis was scoring points. In mid-May, he addressed both houses of the US Congress. His message: after Ukraine, NATO could not allow a "further source of instability on its south-eastern flank." During that trip, Mitsotakis also finalized the purchase of F-35 fighter jets.

But, just a few weeks later on the fringes of a NATO summit in Madrid, President Biden also held out the prospect of fighter jet deliveries, in order to secure Turkey's support for Sweden and Finland's accession to NATO.

The Turkish government has profited from the war in Ukraine. Washington's displeasure with Turkey's purchase of Russian-built anti-aircraft missiles, seems to have been forgotten. Now, above all, NATO needs its members to stand united at a time of crisis.