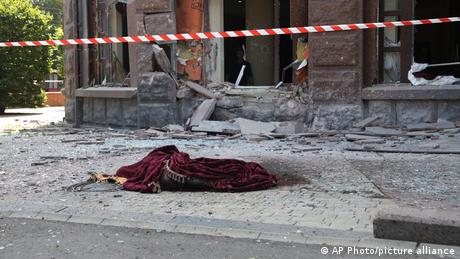 Both Ukraine and Russia are reporting heavy casualties as they engage in heavy fighting on the outskirts of the city of Donetsk in eastern Ukraine.

Overnight fighting was also reported near Pisky, to the west of the former Donetsk airport.

On Telegram, Kyrylenko said, "According to preliminary information, there was artillery fire. They hit a public transport stop, where there was a crowd of people at that time." He also pleaded with residents to evacuate in "a timely fashion."

Russian forces accused the Ukrainians of hitting the center of Donetsk near a theater where the send off ceremony for a late officer in the Russian-backed proxy forces that seized control of the city in 2014 was held. Ukraine has denied Russia's accusations.

Mykolaiv is the closest major population center near where Ukrainian forces hope to launch a counter-offensive, making it a frequent target of Russia's incoming attacks.

Across the Dnieper River from the Zaporizhzhia nuclear power plant, Ukraine reported 60 rockets hit the city of Nikopol, with a population of 107,000. Some residents were left without electricity following the attacks.

The US-based Institute for the Study of War (ISW) believes the intention is to place Ukrainian forces in a difficult position.

"Either Ukraine returns fire, risking international condemnation and a nuclear incident (which Ukrainian forces are unlikely to do), or Ukrainian forces allow Russian forces to continue firing on Ukrainian positions from an effective `safe zone,''' a situational report by ISW said.

Ukraine said the towns of Marinka and Krasnohorivka were also under siege as the city of Avdiivka was shelled.

Amnesty claims the Ukrainian military is endangering civilians by basing its forces in civilian areas.

"We have documented a pattern of Ukrainian forces putting civilians at risk and violating the laws of war when they operate in populated areas," Amnesty International Secretary-General Agnes Callamard said in the report.

The report was swiftly rebuked by leading Ukrainian politicians.

"This behavior of Amnesty International is not about finding and reporting the truth to the world, it is about creating a false equivalence — between the offender and the victim, between the country that destroys hundreds of thousands of civilians, cities, territories and a country that is desperately defending itself," Ukrainian Foreign Minister Dmytro Kuleba said in a video posted on Facebook.

Rafael Grossi, the head of the International Atomic Energy Agency (IAEA), appealed for access to the Zaporizhzhia nuclear plant, Europe's largest. It was captured by Russian forces early in the conflict; they have since been accused by Ukraine and the US of using it as a base from which to launch attacks.

In the interview, with Swiss newspaper Tages-Anzeiger, Grossi said that contact with Europe's largest nuclear plant Zaporizhzhia was "fragile" and that communications were not functional every day.

"We know of allegations that live ammunition is stored in the plant, that there are attacks on the power plant," Grossi said. "Frankly if I don't have access, I can't determine that. There are contradictions between the accounts of the Russian and Ukrainian sides."

A Russian-installed official in Ukraine said on Wednesday that Ukraine had repeatedly used weapons delivered from Western countries to attack the plant. Two of the six reactors at Zaporizhzhia are operating.

On Monday at a nuclear non-proliferation conference in New York, US Secretary of State Antony Blinken said Russia was behaving at "the height of irresponsibility," and was using the plant as a "nuclear shield" to launch attacks and cover its forces in Russia.

Speaking in his native Norway, NATO Secretary-General Jens Stoltenberg said Russia's attack on Ukraine was an "attack on the current world order."

"It is in our interest that this kind of aggressive policy does not succeed," he said.

Stoltenberg said that Russia cannot win the war in Ukraine, which has created the most dangerous situation in Europe since World War II.

He added that if Russia acted in a similar manner against a NATO member state, the entire alliance would react. If Russia succeeds in Ukraine, Stoltenberg said Russia could attack more countries because "Putin will have confirmation that violence works."

Stoltenberg was speaking at Utoya island, where the youth wing of Norway's Labor Party has its summer retreat and a white supremacist, Anders Behring Breivik, carried out an attack that along with a bombing in central Oslo resulted in 77 deaths, 8 in Oslo and 69 on Utoya.

Stoltenberg is the former Prime Minister of Norway. The far-right attack on Utoya island occurred while Stoltenberg was in office.

US accuses Russia of fabricating evidence in Olenivka prison attack

US intelligence officials told the Associated Press news agency on condition of anonymity that Russia was working to fabricate evidence around last week's attack on the Olenivka prison that killed dozens of prisoners of war.

The officials said Russia was hoping to make it appear as if Ukrainian forces were responsible for the July 29 attack in a part of Donetsk under control by Russian proxy forces that left at least 53 dead and scores more wounded.

The Russian military has claimed that rocket launchers provided by the US were used in the strike. The Ukrainian military has strenuously denied the accusation and said it did not launch any rocket or artillery strikes on Olenivka.

UN Secretary-General Antonio Guterres said Wednesday that he was launching a fact-finding mission after requests from both Russia and Ukraine to investigate the deaths at the prison. He said the terms of that mission are being prepared and would be sent to Kyiv and Moscow for approval.

Prisoners of war killed at Olenivka included members of the Azov battalion captured during the fall of Mariupol.

Kremlin spokesman Dmitry Peskov told reporters in a regular call that Russia's Gazprom would like to see a Nord Stream 1 turbine undergoing maintenance repairs in Canada returned, however the documents confirming it is not sanctioned are still missing.

O
Gazprom later said the Nord Stream 1 pipeline is currently operating with only one turbine instead of six.
n Wednesday, German Chancellor Olaf Scholz attempted to call the Russian government to task for blocking the delivery of the gas turbine.

He said Russia was using technicalities as an excuse for halting gas supplies to Europe during a visit to a Siemens factory in Mülheim, western Germany.

Scholz said the turbine "can be transported and used at any time," and alleged, "The non-fulfillment of the gas supply contracts has no technical reasons whatsoever."

The Syrian-flagged Laodicea ship that had been anchored at a Lebanese port as officials there investigated Ukraine's claims that grain onboard was stolen was cleared and set sail, Lebanon's transportation minister said Thursday.

The website Marine Traffic later showed the ship off the coast of Syria near the port of Tartus. Since last Thursday, it had been anchored in Tripoli with 10,000 tons of wheat, flour and barley.

This is a different ship to the one currently headed from Ukraine to Lebanon as part of a deal between Ukraine and Russia that departed earlier this week, drawing much international attention.

Ukraine's Ambassador to Lebanon Ihor Otash had urged authorities to investigate. When those efforts were ultimately unsuccessful, Otash pivoted to requesting Lebanese authorities to not permit the ship to leave port.

On Wednesday, a judge gave permission for the ship to sail. Russia's embassy in Beirut praised the decision and accused Ukraine of lying about the ship's cargo to disrupt its bilateral relations with Lebanon.

In 2015, the US Treasury Department slapped sanctions on the Syrian ship as a result of its affiliation with the government of Syrian dictator Bashar al-Assad, one of Moscow's few allies.

The dispute over the Laodicea comes as the first grain ship set sail from Ukraine following a deal between Russia and Ukraine to facilitate grain shipments in the Black Sea. That ship, the Sierra Leone-flagged Razoni carrying 26,000 tons of Ukrainian corn, just passed through Istanbul on its way to Lebanon.

The Switzerland-based commodities trading and mining giant Glencore reported a net profit of $12.1 billion (€11.9 billion) in the first six months of 2022, a ninefold increase in profits as commodities prices surged following Russia's invasion of Ukraine on February 24.

On the commodities trading side, earnings doubled to $3.7 billion.

In a statement, CEO Gary Nagle said, "Notwithstanding what has clearly been a very complex environment for our markets, our operations, and the world in general, we are pleased to report an exceptional financial performance for Glencore over the period."

The firm said it would return $4.5 billion to its shareholders.

Human rights activists say Russian troops are increasingly refusing to participate in the invasion of Ukraine. Contract soldiers are then being punished by the Kremlin for their decision.

DW takes a look at Russian soldiers being increasingly jailed in occupied Donbas.