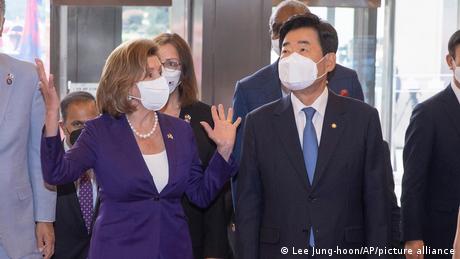 Nancy Pelosi, the US Speaker of the House, met with South Korean political leaders in Seoul and reportedly plans to visit the demilitarized zone on the border with North Korea one day after a controversial visit to Taiwan raised China's ire.

In Seoul, Pelosi avoided commenting on relations across the Strait of Taiwan, which could have further increased tensions as China commences live fire drills following her trip to Taipei. She is the first House speaker to visit Taiwan in 25 years, a visit that angered Beijing greatly.

There are currently 28,500 US troops stationed in South Korea, a key US ally.

Other stops on Pelosi's Congressional delegation tour of Asia include Singapore and Malaysia.

What is Pelosi doing while in Seoul?

Following that meeting, Pelosi spoke of the alliance between Seoul and Washington stretching back to the 1950-53 Korean War. She also addressed legislative efforts to strengthen ties but did not comment on her visit to Taiwan nor the Chinese responses.

At a joint news conference beside Kim, Pelosi said, "We also come to say to you that a friendship, a relationship that began from urgency and security, many years ago, has become the warmest of friendships."

Kim said Pelosi shared South Korea's concerns about increasing nuclear threats from North Korea. Both support their government's efforts to denuclearize the Korean Peninsula through deterrence and diplomacy, he said.

What else is on Pelosi's itinerary in South Korea?

If the trip goes ahead, she would be the most senior US visit to the village of Panmunjom since former President Donald Trump visited in 2019 to meet with North Korean President Kim Jong Un.

The location has been the site of both bloodshed and diplomacy. Located inside the 4-kilometer-wide (2.5-mile) demilitarized zone, along the border between the two Koreas, it was created at the end of the Korean War.

US presidents and other senior officials visited the area along with other parts of the border to signal support for South Korea and its security.

Following her visit to Taiwan, China's Foreign Ministry said, "The current situation clearly shows the impudent interference of the US in internal affairs of other countries." Critical comments on North Korea in South Korea may also irk China, if to nothing like the same degree.

Pelosi is also scheduled to speak by phone with South Korea's conservative President Yoon Suk-yeol, who is on vacation this week. Yoon took office in May and has promised to boost military ties to the US and take a tougher line on North Korea.

South Korea is to restart large scale joint military field exercises with the US later this month after they were scaled down by the previous US and South Korean administrations amid diplomatic overtures to Pyongyang.

South Korean media has treated Yoon's inability to meet with Pelosi in person as a snub and been critical of the fact that he did not send a delegation to the airport to greet her. He was also photographed attending a play in Seoul the night Pelosi landed.