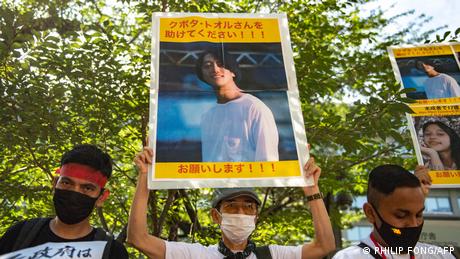 A Japanese documentary maker detained in Myanmar has been charged with breaching immigration law and trying to provoke dissent against the military, the ruling junta said Thursday.

Toru Kubota, 26, was detained while reporting on an anti-government protest that took place in Yangon on July 30. He "has been charged under section 505 (a) and under immigration law 13-1," the military junta said in a statement.

The law targets those trying to incite anti-government feelings among the population and carries a jail term of up to three years, while breaching immigration law 13-1 can carry a maximum of 2 years' imprisonment.

The charging of the journalist comes as Myanmar faces continued scrutiny over a crackdown on freedoms.

Top Southeast Asian diplomats and other significant global officials are currently in the midst of a four-day ASEAN summit in Cambodia, where Myanmar and the actions of the junta, which seized power in a coup in February 2021, are high on the agenda.

Of particular concern to the southeast Asian diplomats, joined by US Secretary of State Antony Blinken and the EU's foreign policy chief Josep Borrell this week, is the issue of Myanmar's government carrying out the country's first executions in decades.

Those who died last month by hanging were a former National League for Democracy lawmaker during the short-live period of partly-civilian government, a democracy activist and two men accused of violence.

The charging of filmmaker Kubota is only liable to increase the concerns among the diplomats attending the the Association of Southeast Asian Nations (ASEAN) meeting.

Myanmar's military has clamped down on press freedoms, arresting reporters and photographers, as well as revoking broadcasting licences.

Kubota is the fifth foreign journalist detained in Myanmar since the military seized power after US citizens Nathan Maung and Danny Fenster and freelancers Robert Bociaga of Poland and Yuki Kitazumi of Japan, who were all eventually released and deported.