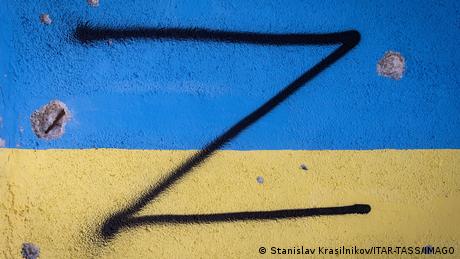 Russian military personnel are increasingly refusing to take part in its invasion of Ukraine, human rights activists say. Contract soldiers who no longer want to fight in Ukraine or want leave for family reasons are being denied their wish to leave the country. The so-called "refuseniks," as relatives and activists tell DW, are being held in camps and prisons in several locations in the self-proclaimed Luhansk People's Republic; that is, in areas that are in Ukraine but not controlled by Kyiv.

From the age of 18, Russian men may sign a temporary contract with the Ministry of Defense to earn a living in the army for a limited time. These contract soldiers are currently fighting alongside professional forces in Ukraine. Many of them had signed their contracts before Russia invaded Ukraine and did not know where they would be sent until the last moment, human rights activists explain.

In the meantime, several parents of soldiers from Russia have made their way to Donbas to push for their sons' release. DW has learned that they traveled to the city of Brianka, where according to media reports, more than 200 such refuseniks are being kept in a camp. Parents have been holding a vigil outside, from morning to night. A Russian soldier who was jailed here told DW the camp is a former penal colony.

Russian soldiers are also being held at other locations in Russian-controlled areas of Ukraine, including Popasna, Alchevsk, Stakhanov and Krasnyi Luch. This has been documented in a complaint by Russia's Presidential Council for Civil Society and Human Rights, which was submitted to the public prosecutor and has also been seen by DW.

The document states that relatives of six conscientious objectors reached out to human rights activists. It also says the soldiers in question were jailed in the above-mentioned camps and prisons, as well as near the frontline in Svitlodar. Russia's military rejected their request to be released, but has also refused to send them back to their Russian barracks.

Human rights activist and coordinator of the Citizens and Army organization, Sergei Krivenko, says detention standards vary depending on where soldiers are held. "At the beginning of July, it was reported that some of them were being held in pits," Kriwenko says. He adds that some relatives had reported their sons had been beaten.

The father of a soldier detained in Brianka, who wishes to remain anonymous due to security reasons, says his son calls him apparently from a general line also used by others to contact relatives. He was told that each morning, soldiers are picked up and "brought to work." It is not clear what kind of work this entails.

Krivenko says one soldier escaped from his Brianka jail and returned to Russia. "If a professional soldier returns to the barracks where he is permanently stationed within 10 days, then this is not considered desertion or unauthorized departure from the unit."

Back to the frontline

Several soldiers have reportedly been pressured to withdraw their cancellation, to the point that they returned to the battlefield. The parents of another contract soldier held in Brianka — who also wish to remain anonymous, as they fear for their son's safety — told DW: "At first, the soldiers had said they would definitely not return to the war and would not sign anything. But suddenly, we learned that they are going back to the frontline, without receiving any notification."

The mere publication of such information can lead to criminal prosecution. DW is aware of a case where a man was not allowed to go on leave because his parents had contacted journalists. For this reason, all relatives of imprisoned contract soldiers that DW spoke with wished to remain anonymous.

Criminal proceedings are also threatened against Russian soldiers unless they resume fighting, says journalist Alexandra Garmashapova, who heads the US-based Free Buryatia Foundation. It was founded in March 2022 following Russia's invasion of Ukraine by opponents of the war in Buryatia and the global Buryatia diaspora. It advocates for Buryatia's democratic self-determination.

In early July, the organization reported that 500 such soldiers from Buryatia had refused to fight in Ukraine and were asking to be sent home. Verstka, a news outlet banned by Russia, says there are 1,793 such soldiers.

Soldiers began refusing to fight as early as March, says Sergei Krivenko. It was during these weeks that Russian forced were withdrawn from the Kyiv region and redeployed to the east. Numerous soldiers then contacted human rights activists, seeking help in terminating their contracts with the Russian army.

Krivenko says there are ever more cases of military personnel refusing to serve and ending up jailed in the self-declared Luhansk People's Republic. "This is a serious breach of Russian law; soldiers cannot be arrested and detained without a trial," says Krivenko. "Only Russian courts on Russian soil can hand down such rulings."

This article was originally written in Russian.