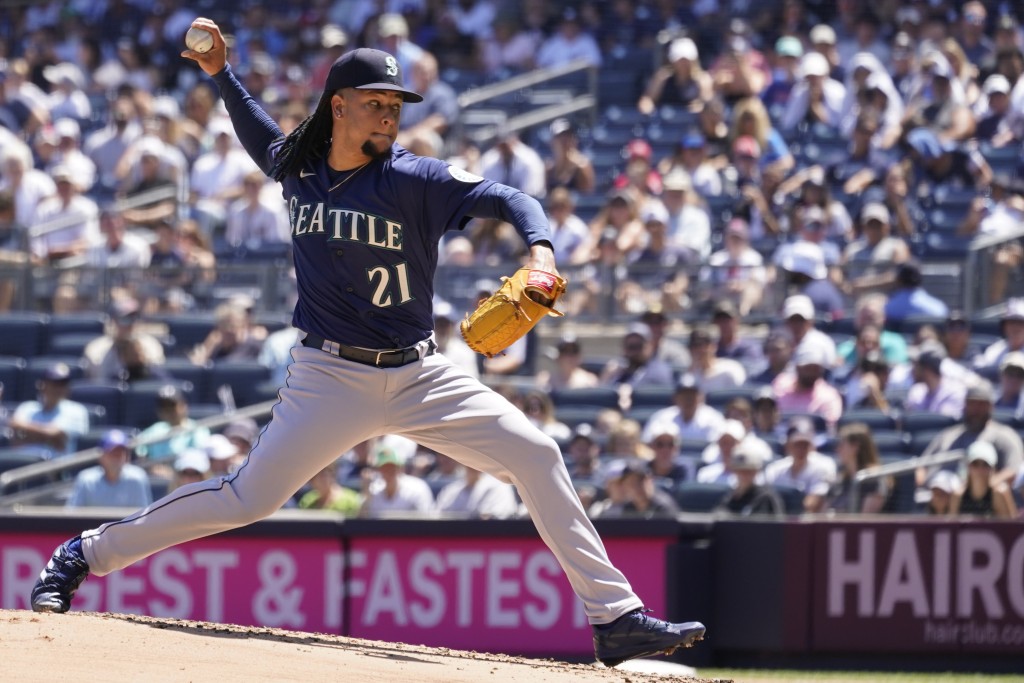 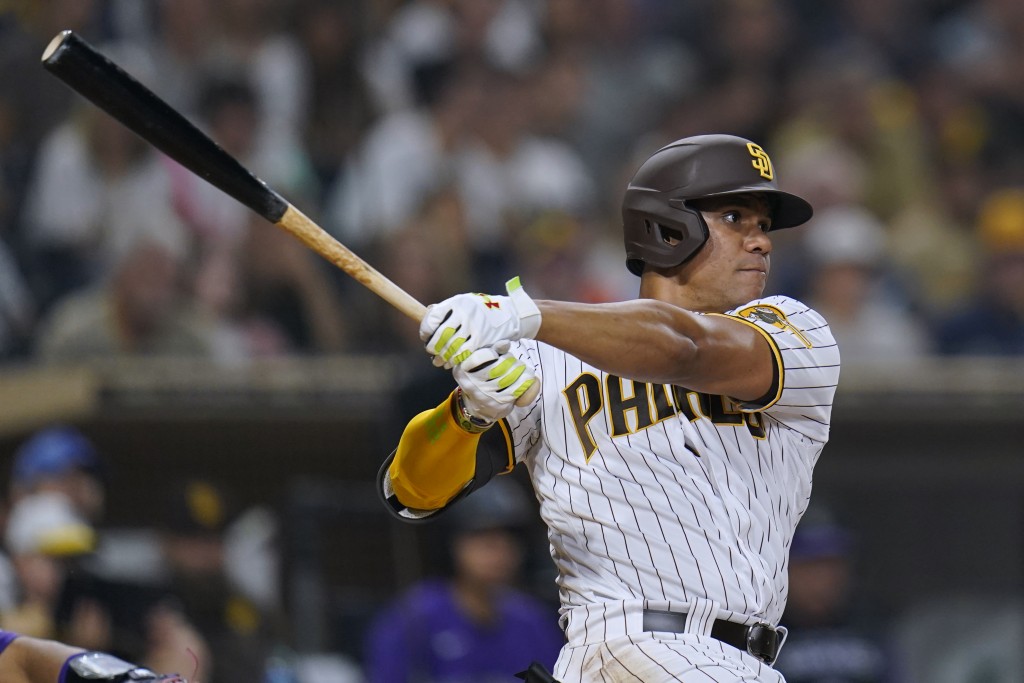 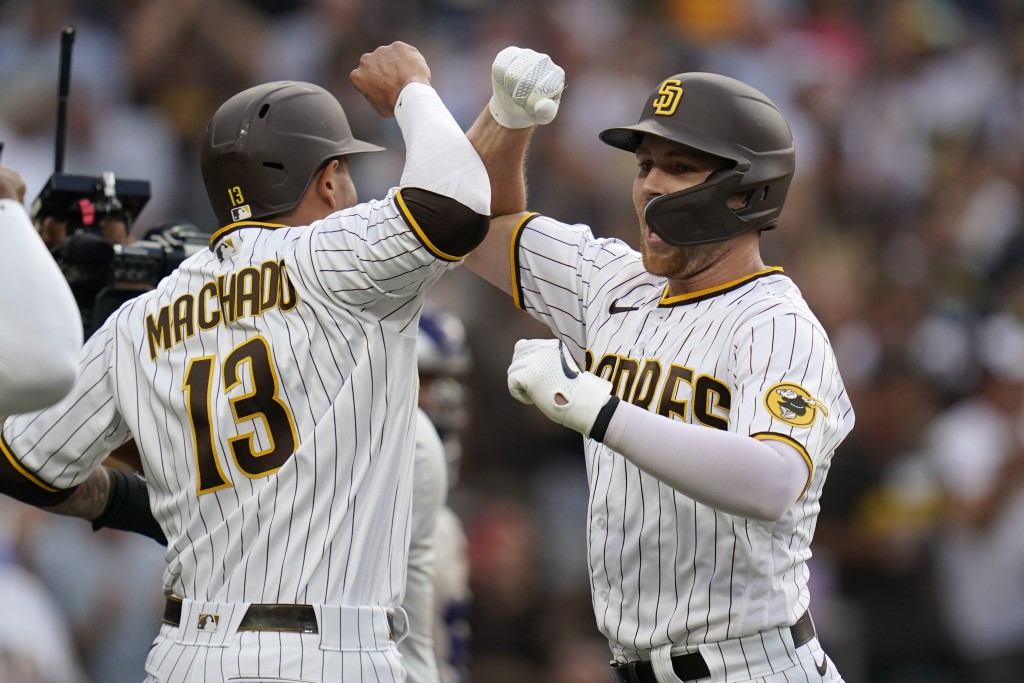 SAN DIEGO (AP) — Juan Soto got multiple ovations in his first game with the Padres and Brandon Drury did even better, hitting a grand slam on the first pitch he saw with his new team to lead San Diego to a 9-1 victory against the Colorado Rockies on an electric Wednesday night at Petco Park.

The Padres unveiled their new-look lineup with Soto batting second and Josh Bell hitting cleanup a day after they were obtained from Washington in one of the biggest deadline deals ever. Drury was also obtained on Tuesday, from Cincinnati, and put a charge into the already festive atmosphere with a grand slam off Chad Kuhl with one out in the first.

Manny Machado homered leading off the fifth and finished a triple short of the cycle in San Diego’s fifth straight win. Jake Cronenworth had a two-run shot. The big beneficiary was left-hander Blake Snell (4-5), who struck out nine in six innings and won his third straight start.

Soto got a standing ovation from the sellout crowd when he ran out to his position in right field in the first inning. The fans rose and cheered again when he came to bat with one out in the bottom of the inning and drew a walk.

Snell had a third straight strong start. He held the Rockies to one run and four hits in six innings, with no walks.

NEW YORK (AP) — Luis Castillo pitched five-hit ball into the seventh inning in his Seattle debut, and the Mariners used a fast start to beat Gerrit Cole and New York.

Castillo (5-4) struck out eight in 6 2/3 innings in his second start in the Bronx in less than a month. The right-hander allowed three runs and walked three.

The 29-year-old Castillo was acquired by Seattle in a trade with Cincinnati on Friday night for four prospects.

Kyle Higashioka hit a two-run homer for the Yankees.

Urias (11-6) threw six scoreless innings, struck out six and didn’t issue a walk. The Dodgers -- who wore patches on their gray jerseys to honor Hall of Fame announcer Vin Scully, who died Tuesday -- won their fourth in a row and for the seventh time in eight games.

San Francisco threatened in the ninth, loading the bases with one out against Craig Kimbrel. But Kimbrel got Mike Yastrzemski to pop out and struck out Austin Slater looking to notch his 19th save.

The Giants dropped their seventh in a row to the Dodgers, their longest losing streak against Los Angeles in a season since also losing seven straight in 1980.

James Kaprielian (3-5) pitched six-hit ball into the sixth as the A’s snapped their three-game losing streak by beating Ohtani (9-7), who has no victories over Oakland in five mound appearances since 2018. Zach Jackson pitched the ninth for his third save.

The Angels’ offense again failed to provide run support for Ohtani, who went 0 for 3 as the designated hitter before getting pulled for a pinch-hitter in the seventh.

Luis Rengifo had a tying RBI double in the fifth for the Angels, who have lost four of six in another dismal season.

Murphy had an RBI single in the fourth before driving a two-run homer to left in the sixth for Oakland.

The Phillies looked to be down to their final three outs when J.T. Realmuto grounded into what was ruled an inning-ending double play with the Braves nursing a 1-0 lead.

But Philadelphia challenged the call, and the replay showed Realmuto’s foot getting to the bag ahead of the relay throw while Rhys Hoskins trotted home from third.

With the game now tied at 1, Collin McHugh (2-2) fell behind 2-0 in the count before grooving one to Castellanos, who connected for his ninth homer.

Zack Wheeler (10-5) pitched seven innings for the win. David Robertson, acquired Tuesday in a trade with the Chicago Cubs, worked a scoreless ninth for his first Philadelphia save.

Orlando Arcia homered for Atlanta, which had won four straight.

WASHINGTON (AP) — Daniel Vogelbach hit a grand slam for the Mets, and Pete Alonso connected for his 28th homer.

New York won for the eighth time in nine games and opened a 3½-game lead over second-place Atlanta in the NL East. The teams begin a four-day, five-game series Thursday in New York.

Washington lost for the fifth time in seven games a day after it traded star outfielder Juan Soto and first baseman Josh Bell to San Diego.

HOUSTON (AP) — Trey Mancini homered in his first start for Houston, and Jose Urquidy struck out 10 in seven scoreless innings.

Mancini hit a two-run drive in the second against Rich Hill (4-5), lifting the Astros to a 4-0 lead. Mancini was acquired in a trade with Baltimore on Monday and then grounded out as a pinch hitter in his Astros debut Tuesday night.

Urquidy (10-4) allowed two hits and walked none. Jose Altuve tied a career high with four hits to help Houston avoid a sweep after losing the first two games of the series.

Xander Bogaerts homered for Boston in the ninth.

ARLINGTON, Texas (AP) — Pinch-hitter Terrin Vavra lined a tiebreaking RBI double right after a disputed stolen base in the eighth inning, and the Orioles completed their first season series sweep against Texas.

The Rangers challenged when Jorge Mateo was ruled safe on a stolen base with two outs, and the call stood after a replay review of the bang-bang play. Vavra then doubled into left-center for a 3-2 lead, and Robinson Chirinos singled him home with his third hit.

Chirinos and Ryan McKenna homered for the Orioles (54-51), who swept all three games in Texas like they did at home a month ago. Cionel Pérez (6-1) got the win.

Jonah Heim and Marcus Semien homered for the Rangers, who dropped a season-worst 12 games under .500 at 46-58 overall. Jose Leclerc (0-1) got the loss.

PITTSBURGH (AP) — Bryan Reynolds hit a solo homer to lead off the bottom of the ninth inning, powering Pittsburgh past NL Central-leading Milwaukee.

Facing a 2-0 count, Reynolds sent a fastball from Devin Williams (2-1) 425 feet to right-center field for a lead-off blast. Reynolds’ 16th homer of the season and first walk-off in the majors ended a drought of 15 games since he hit three against the Washington Nationals on June 26.

Wil Crowe (4-6) struck out one without allowing a hit in the final 1 1/3 innings for Pittsburgh.

Willy Adames had four RBIs for the Brewers, the final two coming on a two-out single in the eighth that cut into a three-run deficit. Rowdy Tellez then sent an RBI single down the line in right, tying it at 7.

Lynn (2-4) allowed one run on rookie Bobby Witt Jr.'s 15th homer in the sixth. He struck out eight and walked none.

Liam Hendriks worked the ninth for his 21st save.

The White Sox (53-51) won for the third time in four games while remaining two games behind the Twins and one behind the Guardians in the AL Central. The Royals lost for the seventh time in nine games.

Witt and Michael Massey each had two hits for Kansas City. Brady Singer (4-4) allowed a season-high 11 hits in six innings.

The game was delayed because of rain for 1 hour, 5 minutes with two outs in the bottom of the second.

Siri led off the Tampa Bay sixth with a single off Adam Cimber (8-4). He stole second and scored on Peralta’s tiebreaking single.

Peralta had two of Tampa Bay’s six hits, all singles, after they managed just two hits in Tuesday night’s 3-1 loss.

Peralta was acquired in a trade with Arizona on Saturday, and Siri came over from Houston in a three-way trade on Monday.

Ryan Thompson (3-2) got the win after pitching two hitless innings. Jason Adam worked the ninth for his fifth save in six attempts.

Teoscar Hernández drove in Toronto’s runs with a first-inning double and his 15th homer in the fourth.

MINNEAPOLIS (AP) — Jorge López got his first save with his new team and newcomer Sandy León drove in two runs, leading Minnesota to the win.

Carlos Correa and Gio Urshela each drove in a run for the AL Central leaders. Joe Ryan (8-4) pitched five innings of one-run ball, bouncing back nicely after a rough outing at San Diego.

López, an All-Star acquired Tuesday from Baltimore, earned his 20th save of the season with a 1-2-3 ninth inning.

Rosario’s 450-foot drive to dead center was the longest of the season at Progressive Field.

Shane Bieber (6-6) struck out eight over six innings in his 100th career start, extending his winning streak in interleague games to eight.

The Guardians remained one game behind AL Central-leading Minnesota.

Alek Thomas and Geraldo Perdomo homered for the Diamondbacks.

The All-Star right-hander allowed six hits, walked one and struck out three on 105 pitches for his third career shutout. Alcantara (10-4) is the first Marlins pitcher to reach double-digit victories in a season since Caleb Smith won 10 in 2019.

Luke Williams had three hits and stole three bases, while Jesús Aguilar homered for the Marlins.