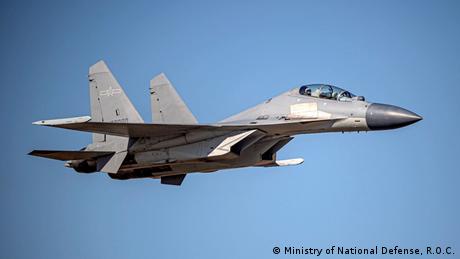 The island's ministry of defense said 27 aircraft were detected, 22 of which crossed the median line of the Taiwan Strait.

While such incidents are common, the latest sortie comes a day before China's People Liberation Army (PLA) is due to hold massive live-fire naval drills around the island, which Beijing sees as a part of its territory. The maneuvers will see Chinese forces deployed in six different zones all around Taiwan. A senior Taiwanese defense official described it as "amounting to a sea and air blockade."

Pelosi: US will 'always stand with Taiwan'

Many Western officials have expressed fear of a military escalation in Taiwan following a scenario similar to the Russian invasion of Ukraine.

China's latest moves are part of Beijing's response to US House Speaker Nancy Pelosi visiting the island this week. Pelosi had ignored China's repeated warnings against the trip. Once there, she pledged that the US would "always stand with Taiwan" in what could be seen as a hint that Washington is ready to support Taiwan militarily in case of a mainland Chinese attack.

Officially, the US does not recognize Taiwan as an independent country and its representatives have attempted to remain ambiguous on the issue of potential US involvement. However, this ambiguity was undermined by President Joe Biden pledging to use military force to defend Taiwan this May.

China says they are victims of US provocation

Beijing decries foreign involvement in what it regards as a domestic issue, as well as any gestures that support Taipei's stance that Taiwan is an independent country. Following Pelosi's arrival to Taiwan, China's Foreign Ministry summoned US ambassador to Beijing Nicolas Burns to convey protests and warn that Washington would "pay the price" for the visit. Chinese diplomats said "the United States are the provocateurs" and China was "the victim."

"The move is extremely egregious in nature and the consequences are extremely serious," China's deputy Foreign Minister Xie Feng was quoted as saying by the state news agency Xinhua.

The foreign ministers of the Group of Seven (G7) nations condemned Chinese military exercises in the wake of Pelosi's Taiwan visit.

"There is no justification to use a visit as pretext for aggressive military activity in the Taiwan Strait," the statement said. The G7 nations said Beijing's "escalatory response risks increasing tensions and destabilizing the region."

"We think that legislators do visits around the world and clearly the visit cannot be used as a justification for heightened tensions or a pretext," Joly told journalists. "So, in that sense we call on China to de-escalate because we think that there might be risks of not only heightened tensions, but also destabilizing the region."

The White House said Wednesday that there is no reason for Bejing to turn Pelosi's visit to Taiwan into a crisis.