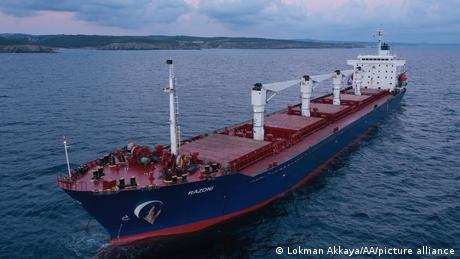 The first grain ship to leave Ukraine since the war began passed inspection and was heading through the Bosporus en route to Lebanon on Wednesday.

Last month, Turkey and the United Nations brokered a grain and fertilizer export agreement between Russia and Ukraine. It is hoped the vessel en route to Lebanon will be the first of many which will ease a global food security crisis.

The Razoni ship left the port of Odesa on the Black Sea early on Monday carrying 26,527 tons of corn. It docked at the entrance of the Bosporus Strait on Tuesday night, before leaving on Wednesday.

The ship was inspected by Russian, Ukrainian, Turkish and UN personnel working at a Joint Coordination Center (JCC) in Istanbul.

Kyiv said it had 17 more ships ready and loaded with agricultural products awaiting approval to leave.

"Just recently, thanks to the UN in partnership with Turkey, we had a first ship with the delivery of grain, but it's still nothing. But we hope it's a tendency that will continue," Zelenskyy told Australian students in a video call. The Ukrainian leader believes Russia may still try to block Ukrainian exports despite the deal, saying Moscow's "blocking of the ports is a great loss for the economy."

US Secretary of State Antony Blinken has said the grain shipment is "only a first step."

Switzerland on Wednesday implemented new sanctions on Russia, targeting the country's gold sector. The move is in line with recent sanctions imposed by the EU.

"The new measures primarily concern a ban on buying, importing or transporting gold and gold products from Russia," a Swiss government statement said.

At the same time, Switzerland said it vowed to mitigate the global food and energy crisis. Bern granted Moscow several sanction exceptions in regards to the trade of agricultural products and oil supplies to third countries.

"To avoid disruption to payment channels, the Federal Council (cabinet) has made two new exceptions with respect to transactions related to agricultural products and oil supplies to third countries, as has the EU," the statement said.

Ukraine said Wednesday that Russian forces are undergoing preparations to launch a new offensive in southern parts of the country. The Ukrainian military also believes that Russia is establishing a strike force that will target Ukrainian President Volodymyr Zelenskyy's hometown of Kryvyi Rih.

"Russia has begun creating a strike group in the Kryvyi Rih direction. It's also quiet likely that the enemy is preparing a hostile counter-offensive with the subsequent plan of getting to the administrative boundary of Kherson region," Ukraine's southern military command said in its latest update.

Russia currently controls the southern Kherson region, but Kyiv has vowed to wage a counter offensive and take back territory.

EU uncertain how many Ukrainians have returned home

The European Union is unsure exactly how many Ukrainians have returned to their war-torn homeland after initially being given temporary protected status within the bloc.

"We don't know exactly how many people have really decided to go back," the EU Commissioner for Home Affairs Ylva Johansson said in reference to the 3.9 million Ukrainians who had signed up for the scheme which allows them to move and work freely in the EU.

The bloc has "so far seen extremely few people that have deregistered" after claiming special protection status, she told reporters.

Here are the other main headlines related to the war in Ukraine on August 3.

The US announced a new weapons package and Russia labeled the Azov regiment as terrorists. Read these and other updates from Tuesday, here.

Vladimir Putin's invasion of Ukraine has unleashed its own interpretive battle online, an unprecedented confrontation of military force and media power. An essay by media scholar Bernhard Pörksen looks at the issue.

Mykhailo Podolyak is a special adviser to the Ukrainian president. He spoke to DW about the war's progress and why his country will not consider negotiations with Russia right now. Find out what he had to say here.