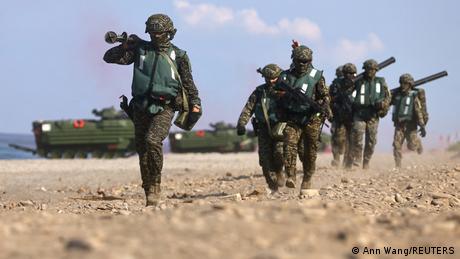 China and Taiwan were trading stark warnings about potential military action ahead of the visit of United States House Speaker Nancy Pelosi to Taipei on Tuesday.

Beijing has threatened to respond to Pelosi’s visit, which it sees as undermining the official US "One China" policy, which recognizes the People's Republic of China as the sole Chinese government, but allows informal relations and defense support for Taiwan. Deep divisions between the two date back to the Chinese civil war, and Beijing still regards Taiwan as part of its territory.

In terms of military strength, Taiwan is completely outgunned by China in almost every respect, from tanks and artillery to aircraft. It does, however, have a larger reserve military force, which it has trained in case of a full-scale invasion by China. An assault on Taiwan has been a serious prospect since the 1950s, and the island state has developed a "porcupine strategy" to defend itself.

This involves the use of sea mines, anti-ship, anti-air, and anti-tank missiles and fast-attack assault boats to prevent a marine invasion force. Should China successfully land an invasion force, Taiwan has prepared for guerilla warfare in its cities and its mountainous rural regions.

China has the world’s second largest annual military budget at $229.5 billion this year, dwarfing every other nation in the Pacific by a large margin. Most estimates hold that it possesses the largest military fleet by number of ships. The US, which maintains a large military footprint in the region, has a much larger overall military expenditure, but this is spread across the entire world.

The United States is still a dominant military power across the entire Pacific region, with major air and naval bases in Japan, South Korea and Singapore. While China has so far only one foreign military base, in Djibouti, it has expanded its reach through the construction of military facilities on the contested Spratly Islands. Chinese naval supremacy is largely kept within the so-called "first-island chain" which runs from Japan to Malaysia, although China has expanded beyond it in recent years.

China has attempted in recent years to improve relationships and expand its influence with its neighbors, largely through trade and infrastructure projects. According to the US Department of Defense, China is seeking to establish more overseas bases to widen its military reach, and "has likely considered" bases in other nearby countries, including Cambodia, Myanmar, Thailand and Sri Lanka.

The US remains the favored partner of many Asian states, however, and can still count on key allies in Japan, South Korea, Singapore and Taiwan.