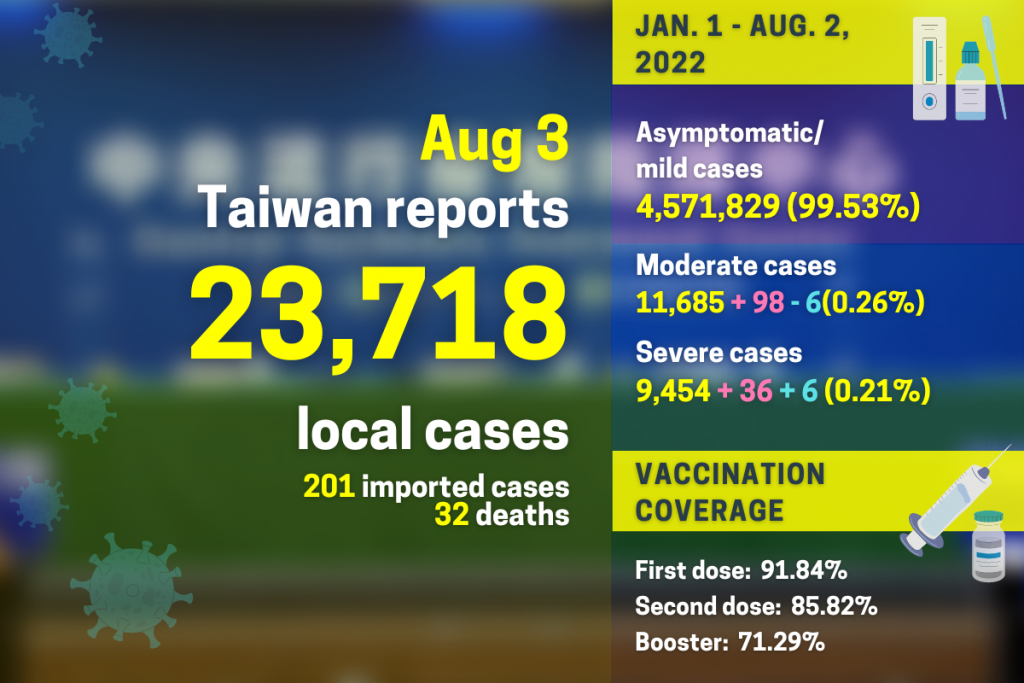 The CECC said the domestic epidemic has shown a downward trend but does not rule out a resurgence very soon due to the spread of contagious Omicron subvariants.

Philip Lo (羅一鈞), deputy head of the CECC's medical response division, announced one local BA.5 case who is the family member of a previous local BA.5 case at the daily press briefing. CECC Spokesperson Chuang Jen-hsiang (莊人祥) urged those aged 65 and older to get a booster shot as the center is expecting a resurgence of cases in the coming weeks due to the potential spread of the BA.5 variant.

The 32 deaths announced on Wednesday included 20 males and 12 females ranging in age from their 40s to their 90s. All of these individuals were classified as severe cases, 30 had a history of chronic disease, and 18 had not received their third dose of a COVID vaccine. Their dates of diagnosis ranged from May 18 to July 30 and the dates of death were from May 28 to July 31.

The 201 imported cases included 115 males and 86 females ranging in age from under 5 to their 80s. Between July 6 to August 2, 15 each arrived from the U.S. and Vietnam; five each from the Philippines and Cambodia; three each from the U.K. and Singapore; two from Malaysia; one each from France, Austria, Japan, and China. The countries of origin of 149 other cases are still being investigated.

A total of 9,026 individuals have died from the disease.