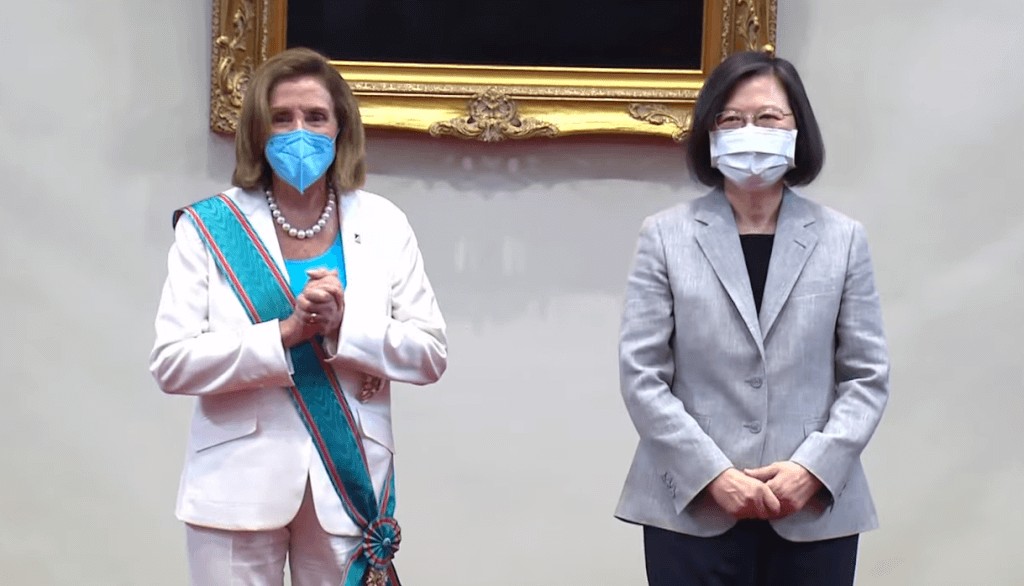 TAIPEI (Taiwan News) — As part of her trip to Taiwan, U.S. House Speaker Nancy Pelosi on Wednesday (Aug. 3) met with President Tsai Ing-wen (蔡英文), who presented her with a special award.

At a meeting held in the Office of the President that was broadcast live at 10:30 a.m., Tsai presented Pelosi with the Order of Propitious Clouds with Special Grand Cordon. Tsai said the award represented gratitude to Pelosi and to express Taiwan's wish for more cooperation.

During a speech delivered after the award, Tsai described Pelosi as "truly one of Taiwan's most devoted friends" and noted the other members of her delegation were also key members of the House of Representatives and have promoted Taiwan-U.S. relations. Tsai said that she is "truly grateful" for their visit to "showcase the Congress's staunch support for Taiwan."

Tsai pointed out that Pelosi has deep and long-standing ties with Taiwan, having first visited the country in 1999, when she expressed concern in the aftermath of the Jiji Earthquake. Tsai extended "heartfelt gratitude" to Pelosi for over two decades of "unwavering support for Taiwan's international participation."

The president noted that the Russo-Ukrainian war has refocused world attention on the Taiwan Strait and that military aggression against Taiwan would have security implications for the entire Indo-Pacific region. She then laid out Taiwan's three key principles in facing uncertainties.

First, in the face of increased military threats, Tsai said "Taiwan will not back down" and will firmly uphold the country's sovereignty and continue to "hold the line of defense for democracy."

Second, Taiwan will do "whatever it takes" to bolster defensive capabilities, the country is committed to maintaining peace and stability in the strait, and "we will make Taiwan a key stabilizing force for regional security, ensuring a free and open Indo-Pacific as well as the stable development of global trade and supply chains."

Third, Tsai said that Taiwan is a "reliable and trustworthy partner" of the U.S. and she vowed to continue to collaborate with the U.S. Congress and White House to boost cooperation in areas such as "Indo-Pacific Security, economic development, talent cultivation, and supply chains, so as to further elevate Taiwan-U.S. relations."

Pelosi said that it was a great honor to receive the award and that she was proud of a "woman president in one of the freest societies in the world." She said she received the award with "immense admiration for your leadership and great personal humility."

The house speaker said that she not only received the award on behalf of herself but the other delegation members. She said that she looked forward to displaying the award in the Speaker's Office and quipped she could possibly wear it there.

Pelosi pointed out that 43 years ago the U.S. established the Taiwan Relations Act, which she described as a "bedrock promise to always stand with Taiwan." She said this foundation has built a "thriving partnership grounded in our shared values of self-government and self-determination focused on our mutual security interests in the region and across the world committed to the economic ties that power prosperity for all of our people."

Pelosi said the story of Taiwan is an "inspiration to all freedom-loving people" and a "flourishing democracy" that had been formed through the "crucible of challenge." She described Taiwan's democracy as one of the freest in the world "proudly to be led by a woman president."

Taiwan is an "island of resilience in the world," said Pelosi. She said the Taiwanese have demonstrated that with "hope, courage, and determination it is possible to build a peaceful and prosperous future."

She said the message her delegation is bringing is that "now more than ever, America's solidarity with Taiwan is crucial." Pelosi said three pillars of the trip are security, economy, and democratic governance and that the U.S. has cooperation in all three areas with Taiwan.

Pelosi recognized and congratulated Taiwan for its management of the COVID pandemic. She asserted that Taiwan is a "model to the world" in terms of cooperation of the people and the success of its epidemic prevention policies.

She closed by arguing the world now faces a choice between democracy and autocracy. Pelosi vowed that U.S. determination to preserve democracy in Taiwan and around the world is "iron clad" and she expressed gratitude to the people of Taiwan for accomplishing this mission.