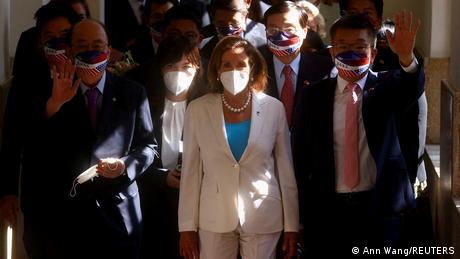 US House of Representatives Speaker Nancy Pelosi met with Taiwan's President Tsai Ing-wen in Taipei on Wednesday, following a meeting with senior lawmakers.

Pelosi, along with six other US lawmakers, arrived in Taiwan late Tuesday in an unannounced — yet highly anticipated — visit protested by Beijing. She is the highest-ranking US politician to visit Taiwan in 25 years.

"We wish to cooperate and work in unity with all democracies around the world," Tsai said after presenting Pelosi with an honorary order.

The president stressed that Taiwan "will not back down" in the face of "deliberately heightened military threat," in an apparent reference to Chinese pressure.

What has Pelosi said so far?

"We come in friendship to Taiwan. We come in peace to the region," Pelosi said during televised remarks at the start of her talks.

She was scheduled to meet with Taiwan's parliament speaker You Si-Kun, but was instead received by the legislature's vice president, Tsai Chi-Chang, as You tested positive for COVID.

Speaking next to the senior lawmaker, Pelosi said she was seeking to increase parliamentary exchanges with Taipei. She also spoke about a new US legislation that could provide opportunities for cooperation in the chip industry between the US and Taiwan, one of the world's largest semiconductor manufacturers.

"We commend Taiwan for being one of the freest societies in the world," Pelosi told Taiwan's parliament.

Later, after meeting with President Tsai, Pelosi said: "The story of Taiwan is an inspiration to all freedom-loving people."

"Now more than ever, America's solidarity with Taiwan is crucial, and that is the message we're bringing today," she added.

Pelosi is also set to meet with Hong Kong and Taiwan pro-democracy activists later in the day.

Wednesday's talks will focus on promoting shared interests and advancing a free and open Indo-Pacific region, Pelosi said in an earlier statement.

How has China responded?

The Chinese Foreign Ministry said Pelosi's visit is damaging stability in the Taiwan Strait, which separates mainland China and Taiwan.

The ministry summoned US Ambassador Nicholas Burns late Tuesday and warned that Washington "shall pay the price" for Pelosi's visit.

"The move is extremely egregious in nature and the consequences are extremely serious," China's Vice Foreign Minister Xie Feng was quoted as saying by the state news agency Xinhua.

Beijing, which considers the self-governing island as part of its own territory, had threatened repercussions to the visit.

Before Pelosi's arrival, Chinese warplanes buzzed the line dividing the Taiwan Strait. China's Defense Ministry also said the military was put on high alert and would launch "targeted military operations" in response to the visit.

"Considering the live-fire training nature of this military activity, Japan has expressed concerns to the Chinese side," Matsuno told reporters.

Why is Pelosi in Taiwan?

In an opinion piece published in the Washington Post after her landing, Pelosi stressed Washington's commitment to Taiwan's democracy.

"We cannot stand by as the CCP proceeds to threaten Taiwan — and democracy itself," Pelosi said, referring to the Chinese Communist Party.

Taipei is the third stop in Pelosi's Indo-Pacific tour, which has included visits to Singapore and Malaysia, with stops in South Korea and Japan also slated to take place.

Although the US holds no formal diplomatic relations with Taiwan, Washington is Taiwan's most significant political and military backer.