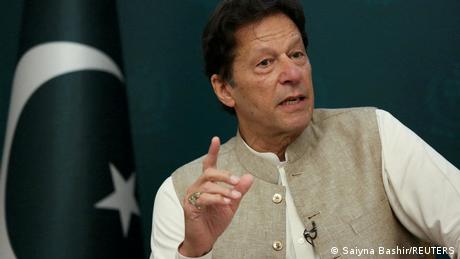 Former Prime Minister Imran Khan's Pakistan Tehreek-e-Insaf (PTI) party on Tuesday said it would challenge the commission's ruling that could see it disqualified from any upcoming election.

Since he was forced from office after losing a confidence vote, Khan has been rallying his supporters to demand a new election. The country's new Prime Minister Shahbaz Sharif has rejected that demand.

What did the ruling say?

Khan's party has faced accusations of receiving funds from abroad, which is illegal in Pakistan, in a case that has lasted years.

According to Pakistani media, a three-member commission tribunal found that the PTI received funding from 34 foreigners or foreign companies.

The commission asked the party to submit an explanation as to why its funds should not be seized, media said.

The PTI itself says the funds in question were received from Pakistanis based overseas, which would not be illegal.

How does it mean he can be banned?

Legal expert Osama Malik told DW the decision could be used by the Pakistani government to declare the PTI a foreign aided political party.

However, a reference would have to be sent to the country's Supreme Court — which would make a final decision on this matter — within 15 days.

Malik said the PTI could respond to the possible seizure of funds or challenge the order itself in a court of law.

What was the reaction?

Former Pakistani Prime Minister Shahid Khaqan Abbasi, Khan's predecessor and one of his political opponents, said the matter should now be settled.

"It has been proved that Imran Khan is involved in the foreign prohibited funding which is illegal according to the Pakistani law and the law will take its course on this matter," he said.

The PTI's founder and Khan's former close associate Akbar S. Baba, who filed the complaint about the funding with the commission, hailed the ruling.

"All the accusations against Imran Khan have been proven," Babar told reporters, adding that Khan should step down from the party.

However, PTI spokesman Fawad Chaudhry denied that the party was guilty of wrongdoing.

"We will challenge this verdict in the court, these funds were received from overseas Pakistanis and they are patriotic people and they will continue to support our party and we have not [hidden] the funds."

As the Oxford-educated son of a wealthy Lahore family, Khan had a reputation as a playboy before he retired from international cricket.

He was prime minister from 2018 until April of this year when he was forced to step down after the confidence vote, which he claimed was the precipitated by a US conspiracy. Washington has denied those claims.

Khan, 69, had promised sweeping reforms to eliminate corruption and cronyism. But he was accused by his detractors of economic mismanagement and foreign-policy mistakes.

While Khan's supporters viewed him as the last hope for Pakistani politics, opponents chastized him for his willingness to accommodate Islamists and antagonize the West.

With reporting from Haroon Janjua in Islamabad