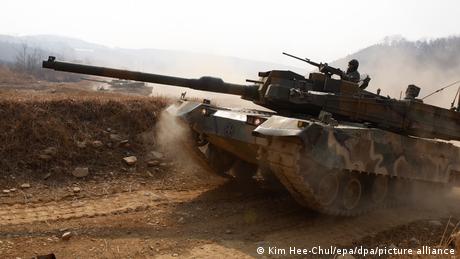 In the largest military export deal in its history, South Korea last week agreed to sell nearly 1,000 K2 main battle tanks to Poland, along with 648 self-propelled howitzers and 48 FA-50 fighter jets, with the governments in both Seoul and Warsaw expressing hopes for further cooperation in the security sphere.

The agreement was confirmed on July 27 and is worth an estimated 20 trillion won (€15 billion, $15.3 billion), although the exact figure has yet to be agreed as discussions are continuing on production of the tanks and howitzers under license in Poland.

Nevertheless, the first batch of 180 K2 tanks is scheduled to be delivered to the Polish armed forces this year, with analysts pointing out that this will more than compensate for the 240 tanks that Poland has provided to Ukraine to fend off the Russian invasion that started in February.

"We want peace so we must prepare for war. The Polish armed forces should be so strong that an aggressor cannot decide to attack," Mariusz Blaszczak, the Polish deputy prime minister and minister of defense, said at the signing ceremony.

"Due to Poland's support for Ukraine, it was necessary to fill the void in ground and air power," Blaszczak added. "The Korean weapon system was the most suitable considering the technology, price and the time of introduction."

He stressed that the deal is "just the first stage of the two countries' cooperation."

South Korea sold weapons worth $7 billion last year, which was a record high for the country, and the figure is expected to hit $10 billion this year.

Exports of military equipment are being driven by both push and pull factors.

The East Asian nation's government and defense manufacturers are keen to increase overseas sales of military gear to earn revenues that can be ploughed back into the development of more advanced weaponry and cement their position as one of the world's leading arms manufacturers.

Equally, foreign governments see South Korean military equipment as reliable and as technologically advanced, yet not nearly as expensive as systems developed by other nations like the US.

A FA-50 fighter, for example, is likely to cost around $30 million, significantly cheaper than a US-made F-35, which costs at least $77 million for a basic model.

The full financial details of the agreement with Poland have not been revealed but buying in such bulk is expected to give Warsaw some room to maneuver on the final price.

The deal also includes lucrative licenses to produce the tanks and howitzers in Poland, while Korea Aerospace Industries is hoping to set up maintenance and repair facility in the EU country. It also intends to open a training school for FA-50 pilots, effectively showcasing the aircraft to more potential buyers in Europe.

Located in a part of the world with numerous and evolving security challenges — not least North Korea, a belligerent neighbor with nuclear weapons and the largest per capita standing army in the world — South Korean developers have earned a solid reputation for the quality of the military equipment they produce.

A K2 "Black Panther" tank weighs 54 tons, has a 120 mm auto-loaded main gun composite armor and integral missile defense systems. It has an off-road top speed of 50 kilometers (31 miles) per hour cross and a range of 450 kilometers.

Both Norway and Egypt are also considering purchasing the tanks, which are the mainstay of the South Korean military.

The K9 "Thunder" is a self-propelled howitzer with a gun that can hurl a round up to 40 kilometers and a rate of fire of up to eight shots a minute. Weighing in at 47 tons, it has already been sold to Estonia, Norway, Poland, Turkey, Finland, Australia and India.

The third system that Poland is purchasing is the FA-50 Golden Eagle, a light combat jet jointly developed by Korea Aerospace Industries and Lockheed Martin of the US.

Although not the most advanced fighter deployed, it can carry out combat missions, reconnaissance and training missions, with a top speed of 1,837 kilometers per hour.

Blaszczak said the aircraft would replace the Polish air force's fleet of Russian-built Mig fighters, for which it is now impossible to obtain spare parts. He added that the first FA-50 aircraft are due to arrive in the early part of next year.

"The quality and cost-competitiveness of South Korea's defense companies is exceptional and clearly the Polish government recognizes that," said Park Jung-won, a professor of law at South Korea's Dankook University.

"This country has faced so many military challenges for so many years, the equipment that our armed forces use has to be good, so Poland sees it as essentially being field-tested."

And while the government in Seoul certainly sympathizes with the plight of Ukraine, it is unable to directly provide lethal assistance to Kyiv, he said. The next-best thing is to replenish and upgrade the stocks of a neighbor that has come to Ukraine's assistance.

"The defense sector is very strategic and important to the national economy, so I very much expect to see more of these sorts of deals in the future as this industry can assist economic growth," Park said.

An emerging leader in defense exports?

To date, South Korean aircraft — both fixed-wing and helicopters — have been sold to the Philippines, Iraq, Indonesia, Thailand, Turkey, Senegal and Peru, while Argentina, Malaysia, Colombia and India have expressed interest in some systems.

Warships and submarines launched at South Korean dockyards have gone on to serve in the navies of Thailand, the Philippines and New Zealand, while tankers have been made for the militaries of Britain and Norway.

The K9 Thunder is South Korea's best-selling military ground vehicle, with units being sold to India, Australia, Egypt and Norway.

A number of other countries are reportedly interested in acquiring the weapons, including Saudi Arabia, the UAE, Romania and Great Britain. The K2 tank has also been sold to Oman and serves as the basis for Turkey's Altay tank, while Australia is testing a variant of the K21 infantry fighting vehicle, with Canberra looking to buy no fewer than 450 units to replace its aging armored personnel carriers.

It is not the most advanced in the world, but it is competitive on price and comes with good quality.

For middle-ranked powers, which are constantly required to achieve a trade-off between cost and effectiveness, South Korean military equipment is seen as a good choice.

"This is completely consistent with those long-term, export-led industrial goals, which go all the way back to the 1960s and have seen the similar development and export of automobiles, ships, semiconductors and so on," he underlined.

"South Korean defense companies will definitely be looking to highlight the technological advances that have gone into this equipment and then build on this deal to expand their sales to other countries around the world."