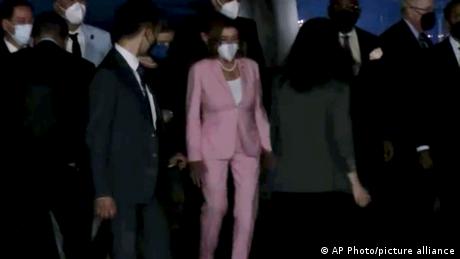 US House Speaker Nancy Pelosi landed in Taiwan on Tuesday in an unannounced visit that comes despite strong warnings of repercussions from China.

The US Air Force plane she was traveling in left Malaysia's capital, Kuala Lumpur, at 3:42 p.m. local time (0742 GMT/UTC) and took an extended route to reach Taipei that skirted the South China Sea. Live television footage showed her being greeted at Taipei's Songshan Airport by Taiwan's foreign minister, Joseph Wu.

Shortly ahead of Pelosi's arrival, Beijing's state media reported that Chinese fighter jets had crossed the Taiwan Strait, which separates mainland China and Taiwan. It was not immediately clear where they were headed.

Pelosi is the highest-ranking US official to visit Taiwan in 25 years. In a statement, the 82-year-old lawmaker said the US delegation's visit to the self-governed island "honors America's unwavering commitment to supporting Taiwan's vibrant democracy."

Visit to show 'solidarity' with Taiwan

Pelosi said discussions with Taiwan's leadership would focus on promoting shared interests and advancing a free and open Indo-Pacific region.

"America's solidarity with the 23 million people of Taiwan is more important today than ever, as the world faces a choice between autocracy and democracy," the statement said.

Pelosi was on a tour of Asia that included visits to Singapore, Malaysia, South Korea and Japan. Taiwanese media had reported on Monday that she was scheduled to visit Taiwan's Parliament. However, the trip was not part of her official itinerary.

Beijing considers Taiwan to be a renegade province of China.

Chinese Foreign Minister Wang Yi said US politicians who "play with fire" on the Taiwan issue will "come to no good end."

Earlier this week, Beijing had warned there would be "very serious developments and consequences" if Pelosi were to visit Taiwan.

Chinese President Xi Jinping has made "reunification" with Taiwan a key objective, and has not ruled out the possible use of force to achieve this.

Taiwan rejects China's sovereignty claims and says only its people can decide the island's future.

Washington follows a "one China" policy and recognizes Beijing instead of Taipei diplomatically, meaning that Taiwan does not have any official relations with the United States.

China demands that countries choose between holding formal relations with either Beijing or Taipei.

However, the US also provides considerable political and military support to Taiwan while stopping short of formal diplomatic relations.