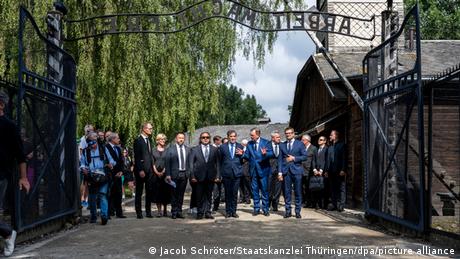 German lawmaker and premier for the state of Thuringer Bodo Ramelow (Left Party) called for an end to the exclusion of Sinti and Roma people on Tuesday.

"We are here today, to look the horror in the face and thereby make it visible," the president of the Bundesrat, the parliamentary chamber that represents Germany's 16 states, said in a speech to mark the European Roma Holocaust Memorial Day at the site of the Auschwitz-Birkenau concentration camp.

With an estimated population of 10 million people, the Roma community is Europe's largest ethnic minority. "And yet, in many places, they are once again being marginalized," Ramelow said. "They experience hatred, exclusion, racism, violence and the denial of civil and social rights in many countries."

Ramelow and Romani Rose, the chairman of the Central Council of German Sinti and Roma, both laid wreaths.

On August 2, 1944, some 4,300 Sinti and Roma were killed in gas chambers at the death camp in Nazi-occupied southern Poland.

In 2015, the European Parliament declared the anniversary European Roma Holocaust Memorial Day to commemorate the 500,000 Roma — representing at least a quarter of their total population at that time — murdered in Nazi-occupied Europe.

'Sinti and Roma were persecuted to their deaths'

It wasn't until 1982 that the Nazi mass-murder of the Sinti, a subgroup of Romani people mostly found in Germany and Central Europe, and Roma people became recognized as genocide.