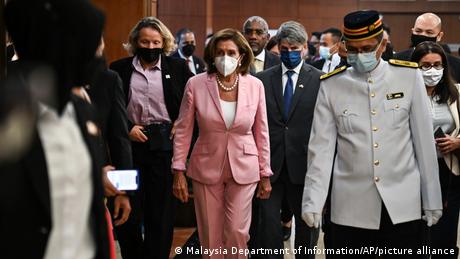 US House Speaker Nancy Pelosi was in Kuala Lumpur for meetings with Malaysian lawmakers on Tuesday, in the second stop of an Indo-Pacific tour overshadowed by outrage in Beijing over an expected Taiwan stopover.

After visiting with Malaysian Prime Minister Prime Minister Ismail Sabri and Foreign Minister Saifuddin Abdullah in Kuala Lumpur on Tuesday, Pelosi's office said the leaders engaged in a "wide-ranging discussion on advancing our shared goals for a free and secure Indo-Pacific."

The statement said Pelosi extended Washington's thanks for Malaysia's vote at the UN condemning Russia's war in Ukraine, and for "repudiating" Myanmar's junta for its post-coup crackdown.

However, the world is mostly watching for Pelosi's next probable stop.

Although the itinerary released prior to her departure only listed stops in Singapore, Malaysia, South Korea and Japan, speculation of an unannounced Taipei visit had preceded the trip and has gathered pace as the 82-year-old congresswoman begins her tour.

US National Security Council spokesman John Kirby said on Monday evening that should Pelosi visit Taiwan, she would be "safe and secure" traveling in a military aircraft.

During a White House press briefing, Kirby did not confirm or deny a Pelosi Taiwan visit, but said she "has the right to visit Taiwan."

"There is no reason for Beijing to turn a potential visit consistent with longstanding US policies into some sort of crisis," he said.

Kirby added that although Washington does not fear a "direct attack" if Pelosi visits, increased Chinese military activity in recent days has increased "the risk of miscalculation" which could lead to "unintended consequences."

China's Foreign Ministry on Tuesday said it was "in communication" with the US about Pelosi's potential visit.

"I think the Chinese will militarily respond if Pelosi visits Taiwan. It could be a series of military exercises close to Taiwan or it could be sending military aircraft across the median line of the Taiwan Strait at a larger scale," Amanda Hsiao, a senior China analyst with the Crisis Group in Taipei, told DW.

Why is a Pelosi visit to Taiwan making waves?

Beijing identifies self-governing Taiwan as a renegade province that one day will be "reunited" with mainland China. Any action seen as legitimizing the government in Taipei, such as a high-level visit from a foreign politician, is seen by Beijing as a violation of its "sovereignty" that warrants a harsh response.

The US holds no formal diplomatic relations with Taiwan, as China demands that its partners choose between Beijing and Taipei. However, the US is also Taiwan's most significant political and military backer.

Beijing has warned of "serious repercussions" should Pelosi visit Taiwan, as it would be a symbol of support for the island and the first time a US House of Representatives speaker has traveled there since former Republican speaker Newt Gingrich in 1997.

However, a lot has changed in 25 years, and Pelosi's tour comes also amid heightened tensions in the Taiwan Strait. China has spent years building up its military while ratcheting up rhetoric on Taiwan.

Russia's war in Ukraine has also put Taiwan on high alert over fears the invasion has emboldened Beijing to act on its ambitions.

"The security balance across the Taiwan Strait is not trending in a good direction for the US and Taiwan," said Kharis Templeman, a Taiwan expert at Stanford University's Hoover Institute.

"A visit by the US House speaker is close to the opposite end of that spectrum," he said.

"While the visit gets Beijing riled up, we need to be less concerned about the dramatic symbolic gestures of support and more focused on pragmatic steps that can help Taiwan fend off pressure over the long run," he said.

What would the visit mean for Taiwan?

Vincent Chao, former director of the political division at the Taipei Economic and Cultural Representative Office in the US, Taiwan's de facto embassy, said Pelosi's visit would reinforce a "precedent" established when her predecessor Newt Gingrich visited the country in 1997.

"It's of paramount importance for Taiwan to keep precedents like this and prevent precedents from being rolled back due to Chinese military intimidation or military coercion," he told DW.

"If we allow bilateral relations to be rolled back depending on the People's Republic of China's (PRC's) reactions, very soon we are going to find ourselves having to defend every aspect of the bilateral relationship and that’s obviously going to be a much larger problem down the road," he said.

With reporting from William Yang in Taipei