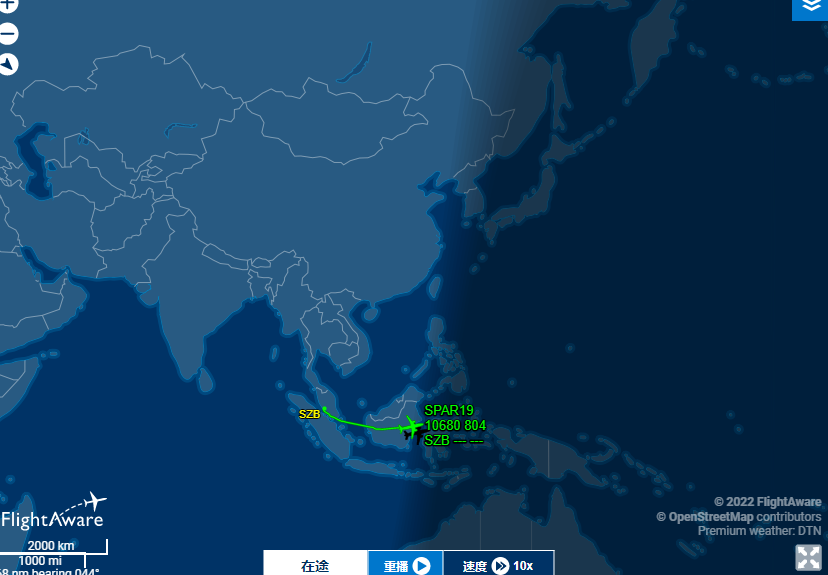 TAIPEI (Taiwan News) — The military aircraft likely carrying the delegation led by U.S. House Speaker Nancy Pelosi was spotted possibly bypassing the South China Sea, where China is reportedly ratcheting up military activity ahead of her potential visit to Taiwan.

Pelosi is expected to land at Taipei Songshan Airport in the country's capital city at 10:20 Tuesday night (Aug. 2), media reported.

In addition to the military incursions into Taiwan's air defense identification zone (ADIZ) on a nearly daily basis this year, two Chinese warships – a missile destroyer and guided-missile frigate – were also tracked in international waters off the coast of Lanyu Island in eastern Taiwan early Tuesday morning (Aug. 2).

The visit by Pelosi to Taiwan drew worldwide attention.

The global flight tracking service, Flightradar24, on Tuesday once recorded up to 300,000 visitors on the page that tracks SPAR19 at the same time, in order to know the whereabouts of Pelosi's plane.

The data shows the plane departed at 3:42 p.m. local time, with the destination shown as "N/A" at the time of publication.

The map also displayed the aircraft was likely to avoid flying over the South China Sea, which involves conflicting islands and maritime claims in the region by several sovereign states, including China, which is reportedly ratcheting up military activity before the mooted visit.

There was another rumor that Pelosi might have taken another plane, the Boeing C-40 Clipper, which is coded SPAR20 on Flightradar24. The plane departed from Tokyo on Tuesday morning and arrived in Kuala Lumpur, Malaysia, at noon.