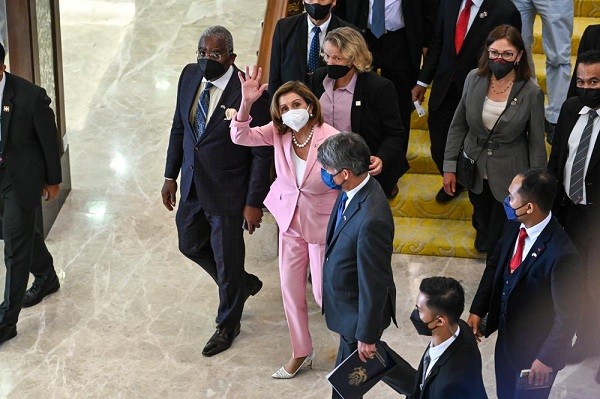 TAIPEI (Taiwan News) — Taiwan’s police have reportedly been getting ready to secure U.S. House of Representatives Speaker Nancy Pelosi’s visit in the event that it takes place, and sources indicate she could come as early as Tuesday night (Aug. 2), UDN reported.

Pelosi is leading a Congressional delegation to the Indo-Pacific region. The delegation visited Singapore on Monday and at press time was in Malaysia.

Taoyuan International Airport Corp. reported that it had received mail threatening to place three explosives at the airport to stop the visit, per UDN. Police are investigating the source of the threats and strengthening the airport’s security.

According to the UDN report, if Pelosi arrives in Taiwan on Tuesday night, the chartered plane is likely to land at Songshan Airport. After staying overnight, she is expected to meet with President Tsai Ing-wen (蔡英文) and visit the country’s legislature on Wednesday.

Even though Taiwan’s Ministry of Foreign Affairs has not confirmed the visit, the Taipei City Police Department has plans in place for her safety, including securing the hotel at which she will stay, conducting traffic control at intersections, and deploying 350-400 officers to protect her, the report said.

In addition, the National Police Agency will also deploy officers to work with U.S. security officers traveling with the delegation, per UDN.

As the American Institute in Taiwan (AIT) has a cooperative relationship with Grand Hyatt Taipei in Xinyi District, it is reported Pelosi and other delegation members are expected to stay there, per UDN. The delegation might also stay at the Marriott Taipei in Zhongshan District, the report said.