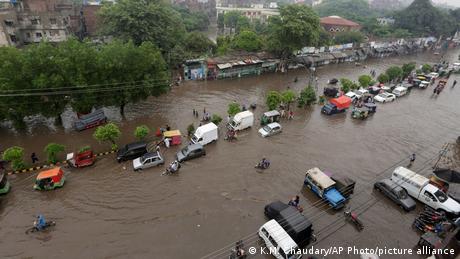 A Pakistani military helicopter with six people on board, including an army general, went missing on Monday.

The army aviation helicopter was taking part in a flood relief operation in the southwest of the country.

"A Pakistan army aviation helicopter which was on flood relief operations in Lasbela, Balochistan lost contact" with air traffic control, the army said in a statement.

It said those on board include "Commander 12 Corps who was supervising flood relief operations in Balochistan," referring to the top army official in the region.

The statement did not give details on what may have happened to the helicopter.

The chopper had not been seen since the rescue operation began, police official Pervez Umrani said.

After bad weather halted the search, crews were set to resume looking on Tuesday morning, he added.

The army has been involved in rescue and relief efforts after above-normal monsoon rains and deadly flooding hit Pakistan, killing hundreds of people and wreaking havoc in the southern province of Balochistan.

Prime Minister Shahbaz Sharif called the incident "alarming." He had traveled to the province earlier Monday to inspect rescue activities.

"The entire nation prays to Allah Almighty for the safety, security and return of these sons of the country who came out to help the flood victims," Sharif wrote on Twitter.

Amidst the loss of life and property, more rains are expected in Pakistan this week. The country’s monsoon season runs from July through September.