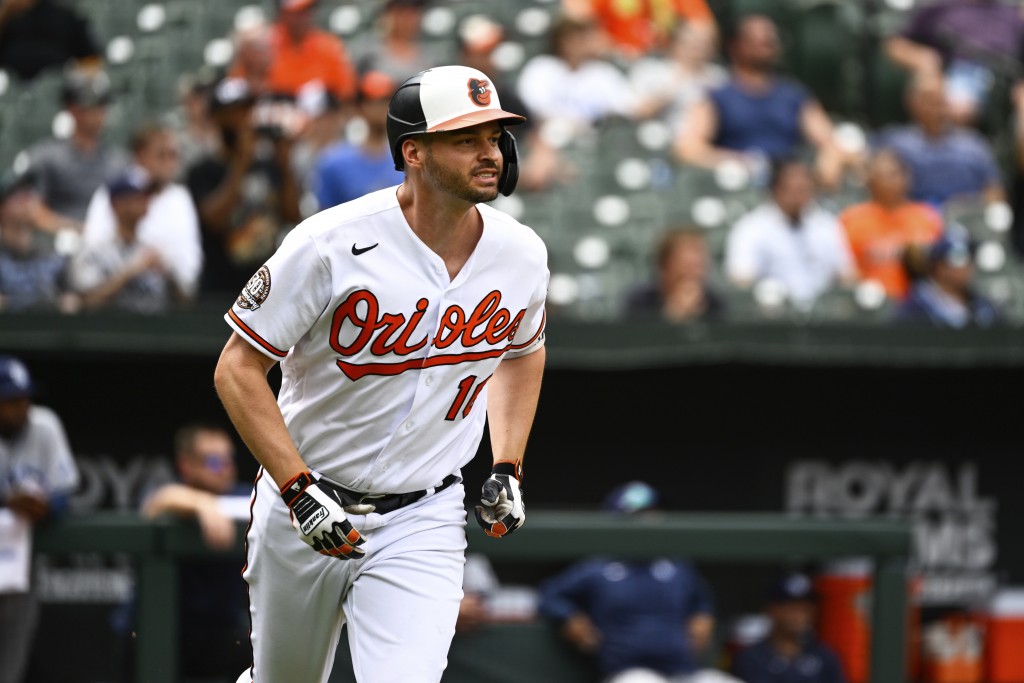 HOUSTON (AP) — The Houston Astros acquired first baseman Trey Mancini from the Baltimore Orioles in a three-team trade Monday, and then added catcher Christian Vázquez in a deal with the Boston Red Sox.

“Our focus obviously is trying to put ourselves in the best position that we can to compete for a World Series this year, and those are two guys that we think can help us get there," Houston general manager James Click said.

The AL West-leading Astros were in the market for a first baseman with Yuli Gurriel struggling this season. The 38-year-old Gurriel hit .319 to win the American League batting title in 2021, but has hit just .243 with seven homers and 28 RBIs this year.

Orioles manager Brandon Hyde said Mancini would be tough to replace on and off the field and that the conversation about the trade was difficult.

“Trey has been such an important part of our lives here the last, since I’ve been here, and a big part of Baltimore and a big part of this community," Hyde said. “And you know it’s hard to see someone like him go, just a close friend to so many people.

“It wasn’t fun, but happy for him and the opportunity he’s going to have, but it’s hard to say goodbye.’

The Astros also needed depth at catcher with Jason Castro, the backup to Martín Maldonado, out with a knee injury and rookie Korey Lee filling in. Maldonado has been credited for aiding the success of Houston's mostly young pitching staff, but he's hitting just .173 this season, making Vázquez a significant upgrade offensively.

“He’s never the guy that you want coming to the plate when there’s runners on," Click said. “He always seems to find a way to put the bat on the ball and get those guys in."

Click said he and manager Dusty Baker would discuss how playing time would be split between Maldonado and Vázquez, but added that Maldonado's workload was just too heavy this season to be sustainable.

Vázquez was in the Red Sox lineup Monday at Houston before being scratched just minutes before the game. Now, he'll move to the other clubhouse at Minute Maid Park where he'll try to help the Astros make another deep playoff push.

“This is one that I know hurts in the clubhouse," Red Sox general manager Chaim Bloom said. “That’s something we don’t take lightly."

He added that they could make more moves before Tuesday's deadline.

“I don’t know yet what is to come, but as with anything, we have to be open to what is right for the organization," he said.

The Astros sent minor league infielder Enmanuel Valdez and outfielder Wilyer Abreu to the Red Sox in the trade.

Mancini, who has been in the lineup at designated hitter 51 times this season, also could fill that role for Houston with Michael Brantley out indefinitely with a shoulder injury. He also has outfield experience, giving the Astros a versatile new addition to the team.

“That was part of the appeal was that we knew that he could go out to either corner outfield spot, he could play first base, he could DH," Click said. “He’s a really valuable bat off the bench. I think one of the most appealing things about him is that he hits lefties and righties very well. And so in a pinch-hit situation late in the game I think he could be a real weapon against both sides."

“I always said I wanted to see the rebuild through and I feel like, in a lot of ways, I have,” Mancini told reporters in Arlington, Texas, where the Orioles were playing the Rangers on Monday night. “I think things are only going to get better here, and besides when I’m playing against them, I’m always gonna be rooting for these guys in here.”

The 27-year-old Siri made his big league debut last year. He hit .178 with three homers and 10 RBIs in 48 games with Houston this season.

Click wouldn't specify what else he might be looking for before the deadline, but said there could be more moves.

“It’s honestly a very difficult roster to upgrade, and that’s because our players have been playing so well and they put us in this position," he said. “So we’re going to have to get creative. But we’ve got some irons in the fire... we’re working as hard as we can. We’ll get something done."