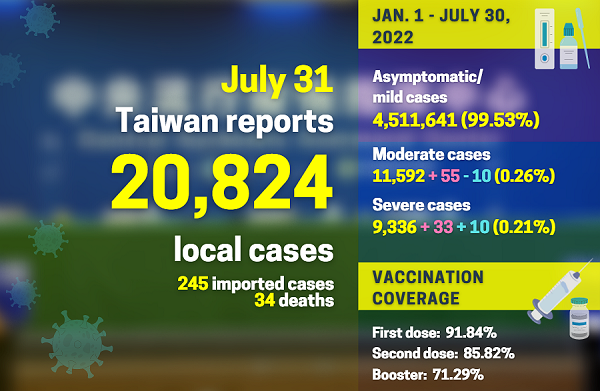 The local cases included 9,645 males and 11,172 females between under five and 100 years of age. The genders of seven local cases are still under investigation.

Among the local cases, 88 were moderate and severe cases.

Among the 34 reported deaths, 19 were male and 15 were female. They ranged in age between 20 and 100, and all of them were severe COVID-19 cases. Thirty-three had a history of chronic illness and 16 had not taken three doses of COVID-19 vaccines. They were confirmed to have contracted the disease between June 23 and July 27 and died between July 12 and Thursday (July 28).

The imported cases included 147 males and 98 females. They ranged in age from under five to 90 and arrived between July 4 and Saturday (July 30). Four arrived from Singapore, three each from India and the U.S., two each from Thailand, Cambodia, Japan, Australia, and Egypt, and one each from Vietnam and Indonesia, while the origins of the other imported cases are still under investigation.