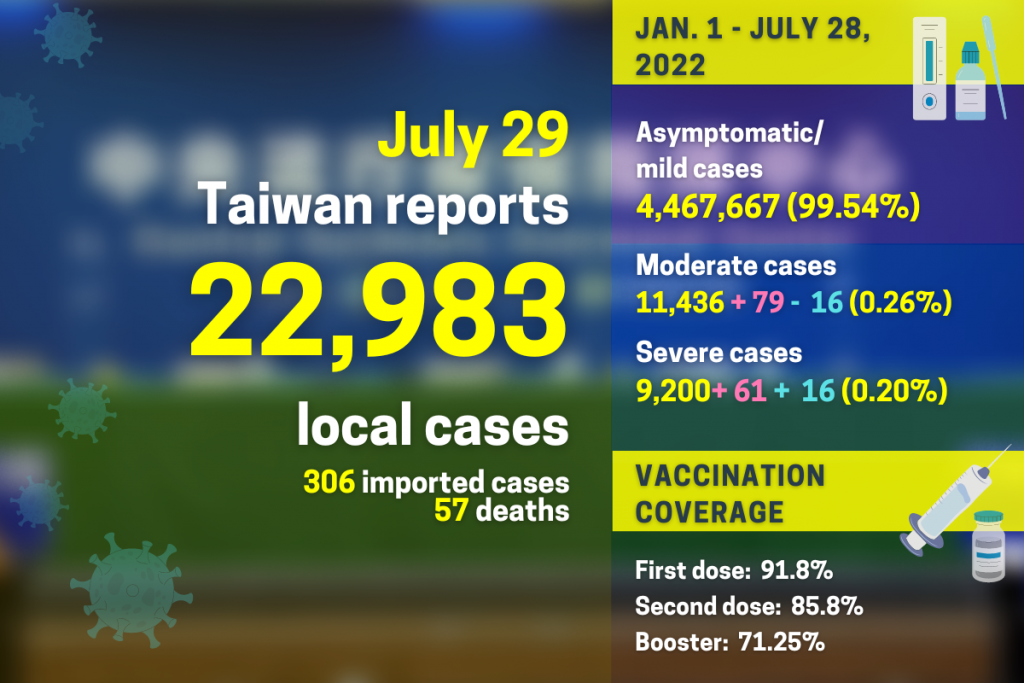 The local cases include 10,431 males, 12,540 females, and 12 cases still under investigation, ranging in age from under 5 to their 90s. The following map displays the latest COVID case counts in every major county and city in Taiwan reported on July 29.

The 57 deaths announced on Friday include 31 males and 26 females ranging in age from their 30s to their 90s. All of these individuals were classified as severe cases, 54 had a history of chronic disease, and 37 had not received their third dose of a COVID vaccine. Their dates of diagnosis ranged from May 12 to July 26 and the dates of death were from May 14 to July 26.

The following map displays the total number of COVID deaths reported in each of Taiwan's major counties and cities as of July 29.

The 306 imported cases include 156 males and 150 females ranging in age from under 5 to their 90s. Between June 29 to July 28, 12 arrived from the U.S.; seven each from Australia, the Philippines, and Vietnam; six from Germany; five each from the Netherlands and Malaysia; four each from France and Canada; three each from the United Arab Emirates, Cambodia, Thailand, and Japan; two each from Italy, Singapore, Pakistan, and the U.K., and one each from Turkey, Colombia, South Africa, China, India, Belgium, and Indonesia. The countries of origin of 222 other cases are still being investigated.

Up until now, 8,833 individuals have succumbed to the disease. Of these deaths, 8,818 contracted the disease locally. 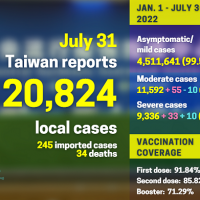