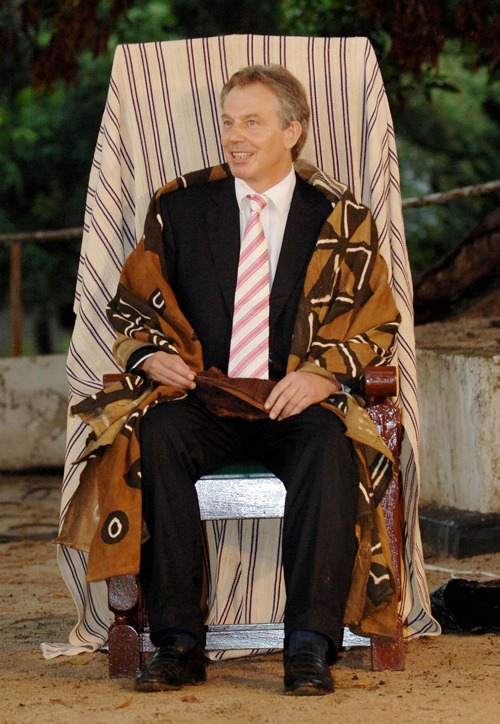 Outgoing British Prime Minister Tony Blair arrived yesterday in Johannesburg on the final leg of his farewell tour of Africa ahead of his departure from office next month.
Blair, who flew into Johannesburg airport from Sierra Leone, is expected to meet with South African President Thabo Mbeki and his predecessor as president, anti-apartheid hero Nelson Mandela, during his two-day visit here.
The Zimbabwe and Darfur crises, world trade and the G8 summit next week in Germany were to all feature in a speech he will deliver at the University of South Africa Business School, Johannesburg, at 11:30 a.m. (South African time), his office said.
The speech, extracts of which were released by his office, was to be his last keynote address in Africa as British Prime Minister before leaving office on June 27.
In the speech, Blair was to express his concern that the world's richest countries are falling short on the pledges they made to increase aid and grant reliefs at the 2005 G8 summit, which Britain chaired.
He was to call for an even greater commitment on Africa from G8 countries at the Germany summit.
On the crisis in Zimbabwe, Blair was scheduled to say that Britain supports South African President Thabo Mbeki's dialogue with Zimbabwe and the need for a swift resolution of the situation.
In an email interview last weekend with South Africa's Sunday Times newspaper, Blair said he would "promise" that Africa would remain at the top of Britain's agenda after he steps down. He said he would also be discussing the issue with Mbeki.
"We'll discuss the desperate crisis in Zimbabwe, which is causing such misery for its people and is now having a damaging impact on neighboring countries," he said.
On the Darfur crisis, Blair said Britain would back tougher sanctions against Sudan.
"We must offer Sudanese President Bashir a choice: engage with us on a solution or if you reject responsibility for the people of Darfur, we will table (propose) and put a vote sanction against the regime," he was to say in yesterday's speech.