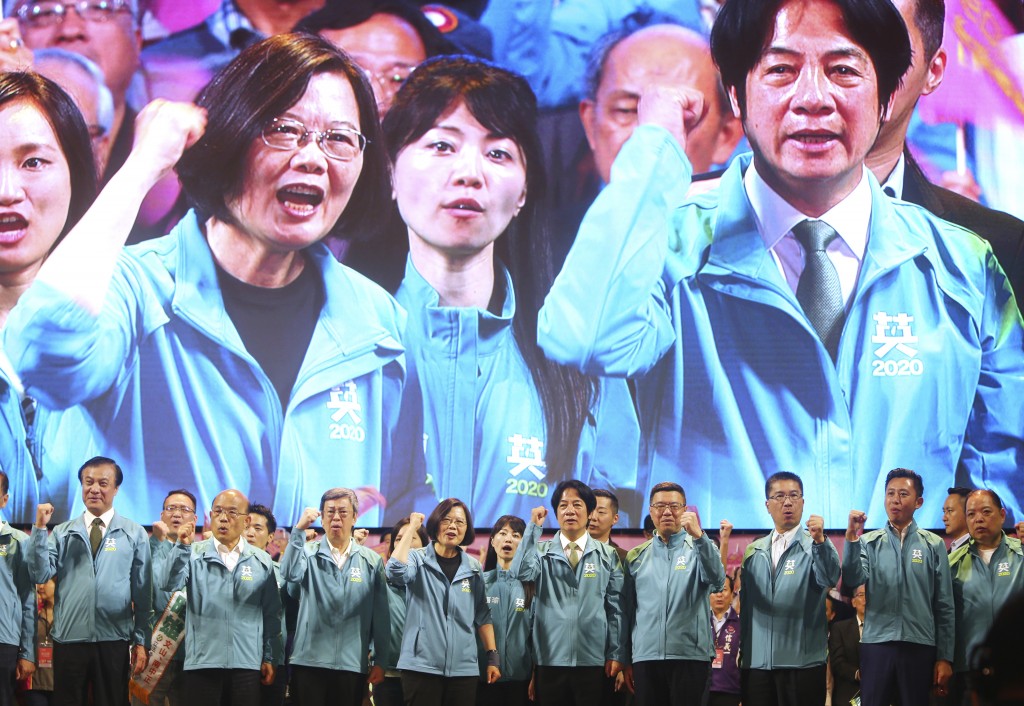 TAICHUNG (Taiwan News) — With martial law still in force, on September 28, 1986 a loose grouping of 132 people previously referred to as the “Tangwai” (黨外, literally “outside the party,” ie, the Kuomintang) bravely (or foolheartedly) met at the Grand Hotel in Taipei to proclaim the founding of the Democratic Progressive Party (DPP). They were all expecting to be arrested for this act of defiance, as at the time the only political parties allowed to operate were the Kuomintang (KMT) and various small parties subservient to KMT (much like China today).

To their surprise, they weren’t arrested, though individual members were continuously charged for “crimes” like calling for Taiwan independence. The party also wasn’t allowed to legally register until several years later.

They were a disparate bunch of activists, but they were unified around two goals: End KMT one-party rule (or eliminate the KMT entirely) and bring in democracy. In both the Tangwai and right from the beginning of the DPP, they were organized into factions to maximize ideological weight or to achieve their aims and goals.

Though it sounds surprising today, one faction was even pro-unification, but they didn’t last very long into the 1990s.

Unlike their more ideological forebears, today’s factions appear to be more about gaining power, gaining key party and government appointments and furthering their interests. Unlike the KMT’s local patronage factions (the topic of a previous column), the DPP’s factions operate nationally.

During the DPP administration of Chen Shui-bian (陳水扁) the situation got out of control, with the factions engaging in open warfare, tearing at the fabric of the party. In 2006, then party Chair You Si-kun (游錫堃) got the party to officially ban factions, which is ironic because for a time afterwards he headed his own.

The factions live on

In spite of claiming they’d cease operations, none did.

The party ban only made the factions even more opaque and more inclined to operate behind closed doors. As discussed in that previous column, this makes writing about them sometimes speculative, and the English language news outlets almost entirely ignore them.

In that same column, we examined how Tsai Ing-wen (蔡英文) brought the factions under control by enforcing a status quo on their relative power. This was done by carefully apportioning out party and political appointments according to roughly the approximate strength and power of each faction, and then maintaining that.

That led to the factions quieting down. But as Tsai enters her lame duck period as president, it is also assumed she will leave her post as chair when her term ends, as is customary — though technically she could stay on.

The power vacuum on the horizon

In anticipation of the power vacuum to come, the factions have once again become very active, and will likely become even more so as the 2024 national elections approach. In Taiwan, traditionally the party’s candidate for president is also the party chair, and two of the most likely leading candidates — Vice President William Lai (賴清德) and Taoyuan Mayor Tseng Wen-tsan (鄭文燦) — are powerful figures in the New Tide Faction and may have factional axes to grind (the third, former Vice President Chen Chien-jen may or may not be Ing Faction, as we’ll see).

During this year’s primaries, the competition to have one’s own factional candidates come out ahead was fierce. There were also heated battles over which factions got to take control of local party headquarters, which gives the faction leverage in this year’s local elections and in 2024.

Because of the secrecy surrounding the factions, it’s not always certain who belongs to which faction, or even if they are in a faction at all. For example, it is widely known that William Lai is New Tide.

However, speculation on who is in a faction is often based on who someone associates with, and sometimes the press gets it wrong. Tainan Mayor Huang Wei-che (黃偉哲), who is known to be close to his predecessor as mayor, William Lai, got fed up with being widely assumed to be New Tide and had to come out and declare he wasn’t a member.

Those who aren’t in factions can sometimes play a pivotal role in the faction system by acting as mediators and peacemakers, a role Huang himself has taken on. When Tsai Ing-wen initially took over as party chair, her lack of factional affiliation was an asset, though there is now a faction that bears her name.

The most powerful faction is New Tide (新潮流系統, usually abbreviated to 新系), and in Tsai’s status quo appointment scheme gets roughly 30-40%. It is also the oldest and gets its name from a Tangwai-era magazine that in English was called "The Movement (新潮流雜誌)" but if translated directly would have been "New Tide Magazine."

It is also so big that the press regularly refers to it having three sub-factions centred on powerful political heavyweights. Former Kaohsiung mayor and current President of the Control Yuan Kiku Chen Chu (陳菊) has the oldest sub-faction still functioning.

William Lai and Tseng Wen-tsan head up the other two sub-factions. Lai’s sub-faction recently did very well in elections held at the party conference earlier this month.

Some notable figures in New Tide include current deputy speaker of the legislature and Taichung mayoral candidate Tsai Chi-chang (蔡其昌), head of the Mainland Affairs Council Chiu Tai-san (邱太三), Pingtung County Commissioner Pan Meng-an (潘孟安) and it is presumed lawmaker and famed cosplayer Lai Pin-yu (賴品妤) is a member of the Lai sub-faction.

New Tide historically was famed for its discipline, but I have my doubts. For example, when William Lai decided to challenge Tsai Ing-wen in the primary to be the party’s candidate for president, New Tide seemed to have been as caught off guard as everyone else, and factional members' responses varied widely.

New Tide is also famed for its secrecy, so when a group of local candidates outed themselves as members in a northern Taiwan press conference to announce they planned to run under the brand “New Tide+” (新潮流＋) it caught everyone off guard.

The Taiwan Normal Country Promotion Association (TNCPA, 正常國家促進會, usually abbreviated to 正國會) is headed by former transport minister and DPP New Taipei mayoral candidate Lin Chia-lung (林佳龍). It was largely formed out of You Si-kun’s old faction when You was in the political wilderness.

Now You is back in the powerful position as legislative speaker, but it’s unclear (as far as I can determine) what his relationship is with TNCPA. In Tsai’s power balancing arrangement, they get around 20%.

The Green Fellowship Association (綠色友誼連線, sometimes written as 綠色友誼系統) is in part descended from the old Formosa Faction (美麗島系), which was one of the factions in the early days of the party. It is sometimes referred to by the nickname Sunny Bank gang (陽信幫), as the faction was brought together by the head of that bank in 2004.

They get around 10% in the power-sharing arrangement. Their most prominent figure is probably lawmaker Ho Chih-wei (何志偉).

Also getting around 10% is Taiwan Forward (湧言會), which is associated with a think tank of the same name, and absorbed much of former premier and current representative to Japan Frank Hsieh’s (謝長廷) faction. It is also commonly referred to as the Ocean faction (海派), which is a play on the name of its founder, the late SET TV chair Lin Kun-hai (林崑海).

Since Lin’s passing, however, there have been rumors the faction may weaken. The most prominent members are Minister of Interior Hsu Kuo-yung (徐國勇) and lawmaker Wang Ting-yu (王定宇), who is frequently quoted in international media on military issues.

The Su Faction (蘇系) is centered around, and named after, current Premier Su Tseng-chang (蘇貞昌). It has an associated think tank, Taiwan Brain Trust.

It gets around 10% in power sharing. There have been some references to a Ker Chien-ming sub-faction (柯建銘系統), but not enough to be entirely confident it exists as a serious force.

The Ing Faction (英系) is named after President Tsai Ing-wen, but it doesn’t appear to headed by her, nor does she want to be associated with it. For a long time she denied such a thing even existed, but now acknowledges it does.

However, on stage, speaking to powerful figures in the faction she said: “In the future, can you please stop telling everyone you’re called the Ing Faction? When you do things, you never let me know in advance.”

The press has labelled the head of the faction as DPP Legislator Chen Ming-wen (陳明文), and associates it with the Taiwan NexGen Foundation. Lawmaker Kuan Bi-ling (管碧玲) may be the most prominent name associated with the faction.

There is some speculation that former Vice President Chen Chien-jen (陳建仁) may be a member. He was recruited into the DPP recently by Tsai, is serving as DPP Taipei mayoral candidate Chen Shih-chung’s (陳時中) campaign manager and was named by the Friend’s of Tsai Ing-wen Association as an honorary head.

These is also speculation that Chen is a member, and it was widely said in the press that the Ing Faction was strongly behind Chen getting the nod as their candidate in Taipei. However, speculation on both Chen’s membership appears to be just that, speculation.

The Ing faction has been getting around 10% in power sharing.

Earlier this year a new faction was founded, which roughly translated is called ‘Democracy Living Water Connection’ (民主活水連線). Curiously, it is a strongly pro-William Lai faction, but it isn’t New Tide, nor the Lai sub-faction.

It was founded by Cho Jung-tai (卓榮泰), who served as DPP chair when Tsai stepped down for a period after the disastrous 2018 election, and former party secretary-general Luo Wen-jia (羅文嘉). Sunflower Movement spokesperson Lin Fei-fan (林飛帆), who is currently a deputy secretary in the DPP, is also sometimes associated with the faction in the press.

It is unclear how powerful they are, but both Cho and Luo were elected to the 30-member DPP Central Executive Committee earlier this month.

Finally, the press will frequently refer to New-Su-Association (新蘇連) as one entity or alliance, in reference to New Tide, Su and the Sunny Bank factions, and apparently they often work together. Sometimes, though, the press will only refer to a New-Su alliance (新蘇).