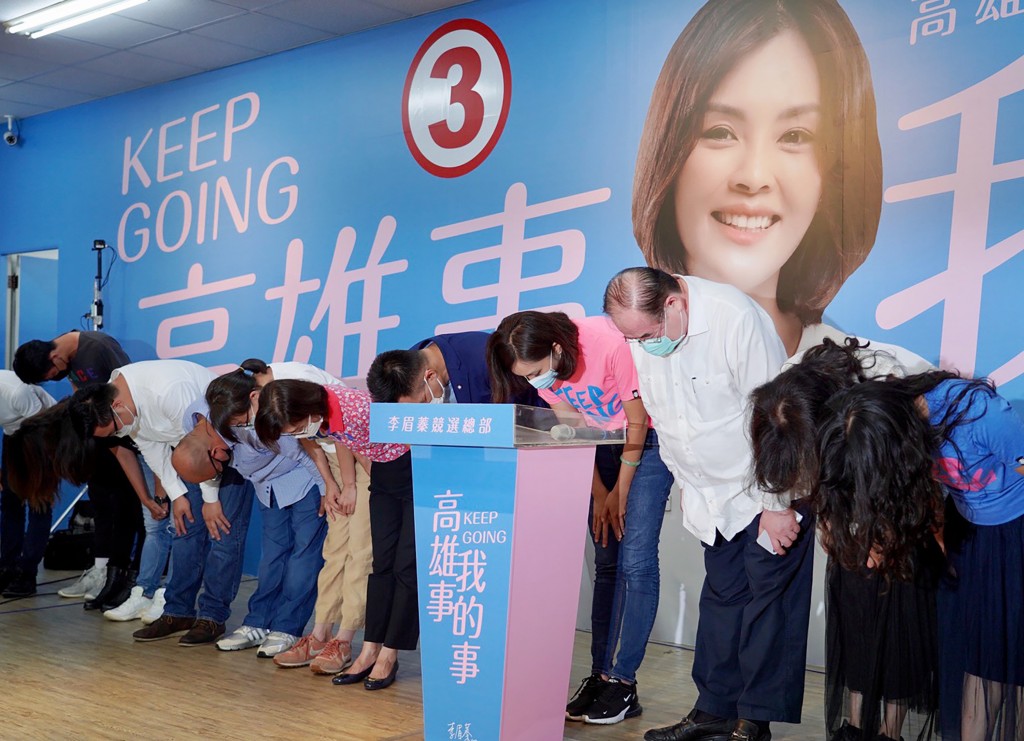 Among her blistering attacks, she accused him of taking "a million" photos portraying him as a handsome prince, going to parks and dancing, that he's vacuous, and as a candidate just relies on his outward appearance.

Fair or not, she's playing a shrewd game. On one hand, she's feeding the public perception of Chiang as a pretty boy princeling lacking substance.

On the other, she's playing into the local media's obsession with the public image of politicians. Kao is personally very familiar with this phenomenon, with her famous eye roll and even her dirty pillow getting heavy rotation in the news cycle.

Amazingly, Kao has also managed to get the press to become preoccupied with her awful singing, as the topic frequently came up in the news cycle and somehow improved her public image. Turning a lack of talent into an asset is pretty impressive.

While the press focusing on a politician's public image is hardly unique to Taiwan (think Donald Trump's hair), the local press takes it to a whole new level of hyperventilating obsession. Almost none of this makes the English press, but a quick scan though the local news channels will almost certainly turn up examples of this, especially during election season.

It follows a regular pattern. Something is picked up on, the news jumps all over it and it runs for one news cycle. Then, if the politician is skilled and has a quick response that sounds reasonable, the issue likely ends there and people forget about it.

However, if the politician is slow to respond or if it feeds into the negative perception of the candidate, then a second or even third round of news cycles will follow. Often, this will feature the politician's slow response, famous people's commentary on it, reactions and comments from netizens (often cherry-picked according to the outlet's political bias), or all of the above.

If there isn't a pattern that confirms any significant personality flaw, it will usually be forgotten. However, if a pattern appears that suggests a character flaw, such as vanity, incompetence, greed, arrogance and so forth, it can be very damaging to the politician's public image.

This is what Kao was up to, doubling down on the already existing public suspicions in some quarters that Wayne Chiang is an unsubstantive pretty boy. It doesn't help Chiang that, in spite of plenty of time to do so, he has yet to finalize his campaign team and hasn't released much of a platform to date.

I have a unique perspective on this. Bizarrely, this Taichung-based foreigner accidentally kicked off two news cycles that messed with a Kaohsiung mayoral campaign.

In July 2020, the Kaohsiung mayoral by-election was underway following the successful recall of the Kuomintang’s (KMT) Han Kuo-yu (韓國瑜). The loser in the 2018 election, the Democratic Progressive Party’s (DPP) Chen Chi-mai (陳其邁), who was then vice premier, was taking on city councillors Jane Lee (李眉蓁) of the KMT and Wu Yi-jheng (吳益政) of the Taiwan People’s Party in the mayoral race.

The Chen campaign was doing its best to humanize the stiff and awkward technocrat with giant campaign graphics depicting him as a cartoon character bizarrely crawling around on his non-cartoon cat, which was portrayed as being Godzilla-sized. 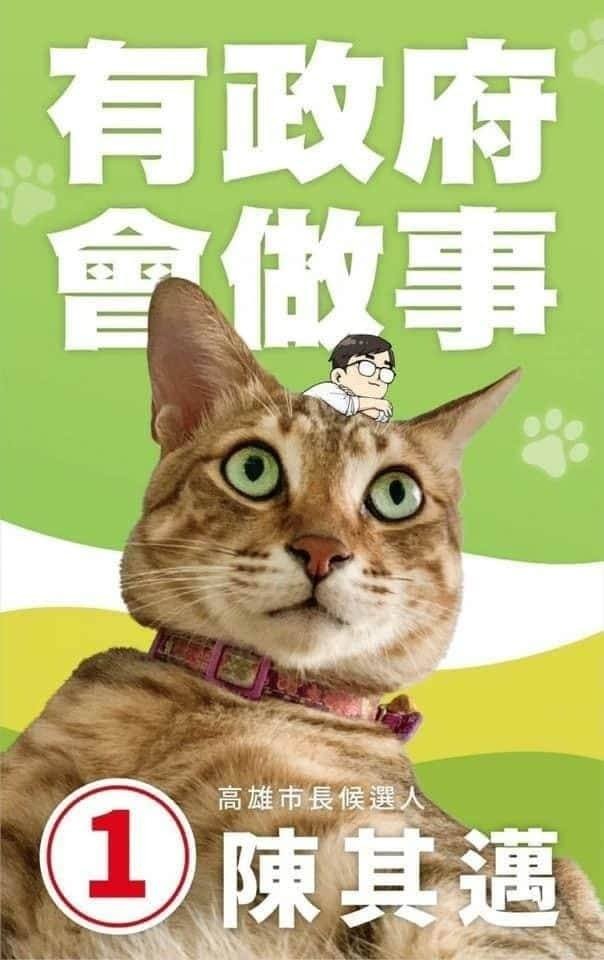 In spite of Chen being the overwhelming favorite, and having to awkwardly campaign with Han, Jane Lee persevered, presenting a fresh and cheerful image. She seemed like a good candidate and a potential rising star in the KMT.

But by this point, her campaign had come off the rails. It turns out she had plagiarized 96% of her thesis, and she had to issue a humiliating public apology.

As a side note, in a curious coincidence, the current DPP candidate for Taoyuan mayor, Lin Chih-chien (林智堅), is facing similar accusations about plagiarizing his thesis (it’s still being investigated and he denies it).

The scandal had seriously damaged the Lee campaign, and she had been relentlessly vilified in the press. Then, three days after her tearful apology, her mother-in-law became the news after bizarrely saying that her breasts would shrink if she lied.

Of course, the press and the internet had a field day with that, much of it unpleasant, nasty, inappropriate and undeserved. Lee must have been praying for nothing more to go wrong. But it did ... in the midst of all of this, I re-posted this campaign poster: 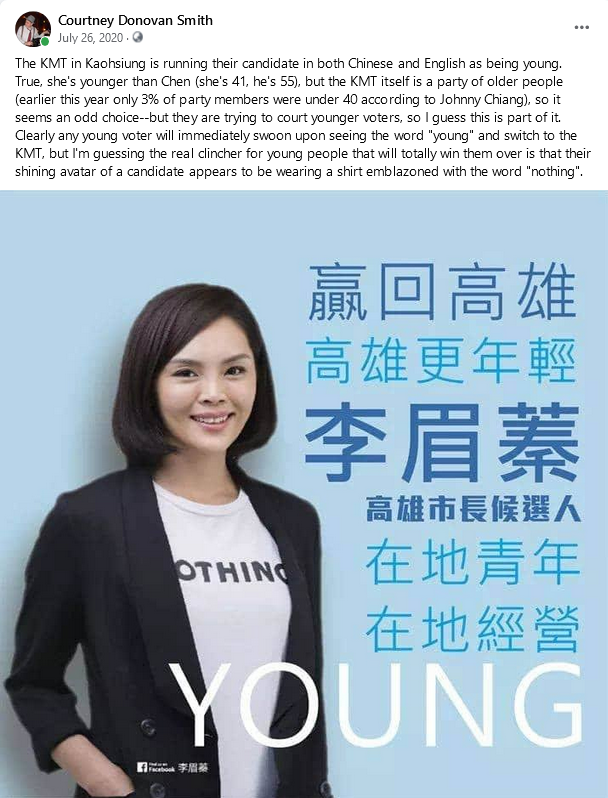 Though the beginning of the word is obscured, I surmised — correctly as it turned out — that the word was “nothing.” My comments on Facebook on the campaign poster:

“The KMT in Kaohsiung is running their candidate in both Chinese and English as being young. True, she's younger than Chen (she's 41, he's 55), but the KMT itself is a party of older people (earlier this year only 3% of party members were under 40 according to Johnny Chiang), so it seems an odd choice--but they are trying to court younger voters, so I guess this is part of it. Clearly, any young voter will immediately swoon upon seeing the word "young" and switch to the KMT, but I'm guessing the real clincher for young people that will totally win them over is that their shining avatar of a candidate appears to be wearing a shirt emblazoned with the word "nothing".”

My intent was not to hurt Jane Lee, it was to provide some useful information to my modest number of online followers and poke a bit of fun at a poor marketing choice in a field — politics — where messaging is everything. Turns out Lee was going to see my post after all, ad nauseam, for the next two to three days.

On social media, many of my following are people who are interested in Taiwan politics, which includes, as it turns out … Taiwanese journalists. Apparently, my sarcasm had hit a nerve.

As part of my daily research, I closely follow both the local online and TV news outlets, but the next day it was full of articles about me and my Facebook post.

Most, possibly all, of the news outlets covered the story, from the deep-green to the deep-blue. As far as I can tell, the first article to appear was on Newtalk News with the headline: “High-level sarcasm? Former Taichung American Chamber of Commerce chairman: Jane Lee is counting on “nothing” to attract young voters.” 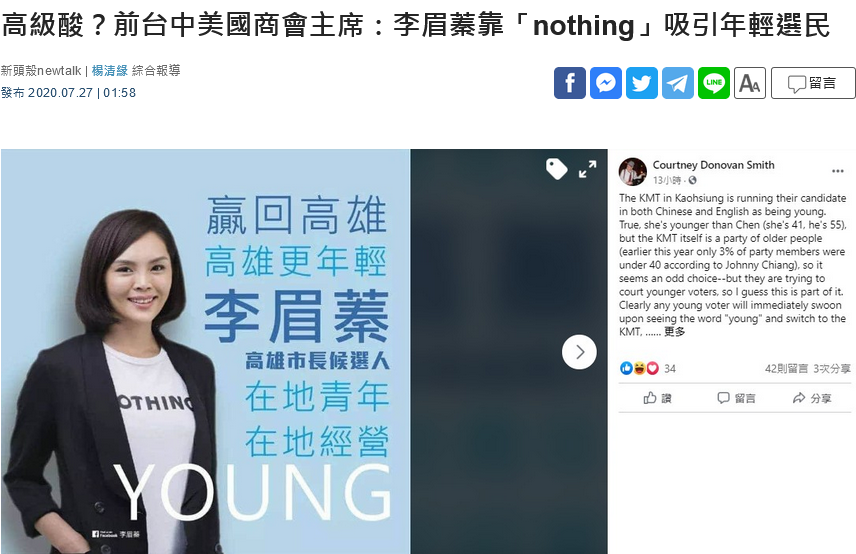 Pan-green TV news outlet SET liked the story so much they interviewed me at my office, though I’m obviously nervous in the interview. SET also ran an online story going even further, linking it to the “smaller breasts” story by suggesting that releasing a campaign poster with “nothing” emblazoned across her chest right after that story broke wasn’t a very good choice — in spite of the fact the poster had been released earlier.

Initially, her spokesperson said the shirt had “no special meaning,” but the story continued to churn through the news cycle and they continued to ask him about it the next day. He said that “nothing” could also stand for “nothing impossible,” which has an “opposite meaning.”

He also noted that many people wear shirts with English words on them without it carrying any special significance, which is a good point. I’d add too that the shirt complimented her blazer nicely and it is an attractive poster.

However, Lee is a politician from a political family, so she must know the critical role of messaging on her own campaign poster. Pretty much everyone under the age of 50 in Taiwan knows what the rather basic English word “nothing” means.

It’s all the more puzzling because overall her marketing, unlike that for many in her party, was overall quite good. She even put out what may be one of the best campaign music videos ever of her doing a Kaohsiung-themed cover of Jay Chou’s (周杰倫) “Mojito.”

But perhaps the biggest mistake her campaign made was the slow response, which gave the story legs for another news cycle. This should only have been a one-cycle story, but the slow and awkward response appears to have fed the perception that she was out of her depth.

In the end, I don’t think it had much of an impact on her campaign, there were plenty of bigger issues like the faked thesis, and there were more embarrassing moments to come, such as when Han Kuo-yu at a campaign rally claimed to have cured Lee’s eight years of infertility by getting her to eat goose eggs (you can’t make this stuff up).

I don’t think it was a tipping point for any voters, and today, aside from myself and maybe Jane Lee, I doubt anyone remembers it. Overall, it was a surreal experience to see myself in the same news I cover.

Artist Andy Warhol, well before the advent of social media, presciently said, "In the future, everyone will be world-famous for 15 minutes."

Though hardly world-famous locally, I finally had my 15 minutes.