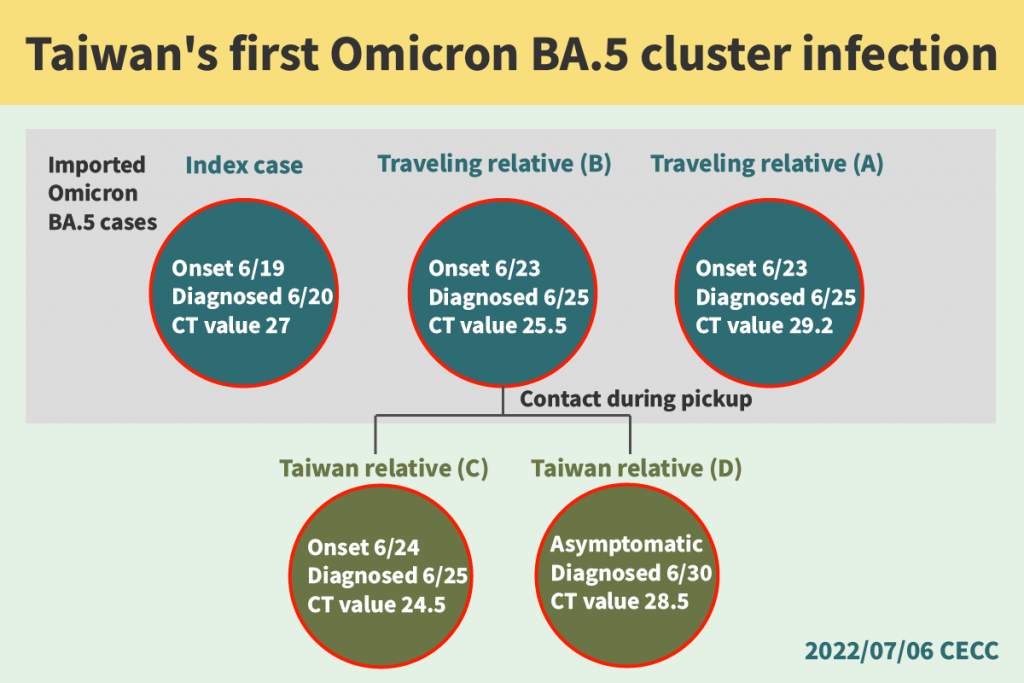 At a press conference on Wednesday, Philip Lo (羅一鈞), deputy head of the CECC's medical response division, announced two new imported cases infected with BA.5, a male (Case A) and a female (Case B), both of whom are children under the age of 10. Cases A and B are family members who live with the index case, who was the first person infected in the cluster that was announced on July 4.

The three arrived in Taiwan from the U.S. on June 19 and were quarantined at the same epidemic prevention hotel. The index case had symptoms such as a cough, fever, and earache when entering Taiwan.

The index case tested positive on a test administered at the airport and was diagnosed with the virus. Because Case A and B experienced a fever on June 23, they were tested for the virus and diagnosed with COVID.

The three were moved out of the hotel on June 26 and continued to undergo quarantine at home. Currently, their quarantine period has expired.

Lo explained that the two new local cases infected with BA.5 are a male in his 30s (Case C) and a female in her 50s (Case D). They are believed to be part of the BA.5 family cluster infection tied to the index case.

On June 19, Case C and Case D took the three imported cases from the airport to an epidemic prevention hotel. On June 24, Case C started developing symptoms such as a cough, fever, and sore throat.

After Case C tested positive on a rapid antigen test kit, the case was listed as a confirmed COVID infection. That same day, Case D was moved to another location to undergo home quarantine.

Presently, the quarantine period for Case C has expired, while Case D will remain in quarantine until July 7. A friend of Case C who was found to be a contact, tested negative for the virus and is currently undergoing self-health monitoring.

In a press release issued that day, the CECC advised the public that, based on current research, the probability of serious illness caused by the BA.4 and BA.5 subvariants of Omicron is not significantly higher, but they have a higher level of contagiousness. The CECC stated that increasing the COVID vaccine coverage rate in the country can reduce the threat of community transmission posed by BA.4 and BA.5.

The center called on the public to complete their COVID vaccinations as soon as possible; implement personal protective measures such as hand hygiene, cough etiquette, and wearing masks; reduce unnecessary travel, activities, or gatherings; avoid crowded places or areas with a high risk of transmission of the virus; and actively cooperate with various epidemic prevention measures.