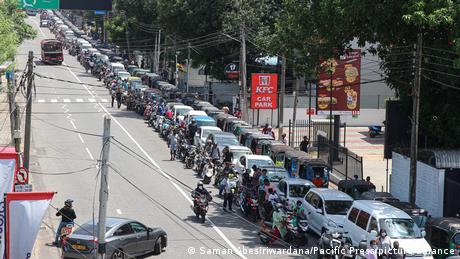 Sri Lanka's economic crisis is worsening, and the daily lives of people living in the small island nation have been severely disrupted. Due to rising prices of essential items, as well as fuel and medicine shortages, many Sri Lankans desperately want to leave the country.

On Tuesdaz Prime Minister Ranil Wickremesinghe said that with debts now totalling over $50 billion, Sri Lanka is "a bankrupt country."

With no signs of the crisis letting up, and no bailout from the IMF in sight, many Sri Lankan refugees are traveling illegally by boats to nearby countries like India and Australia in a desperate bid to escape the unfolding disaster.

On June 27, an elderly Sri Lankan refugee couple was found unconscious on an Indian beach suffering from severe dehydration. The couple had tried to cross from Sri Lanka to India by boat. The elderly woman died in hospital on July 2 after efforts to save her life failed.

As of now, more than 90 refugees have landed on India's shores, where they are being kept in a refugee camp.

Sri Lanka is running out of fuel and currently has very limited supplies. On June 28, the government announced restrictions on fuel distribution, and said that for almost two weeks,fuel will be provided only to vehicles employed for essential services such as public transport and emergency services. Many schools have also been shut down and public transport has been limited.

''It's a lockdown-like situation,'' says 25-year-old Amaan Rifai, a business owner in Dehiwala.

In many parts of the country, gas stations have set up separate queues for essential services. If stocks are available, then other customers may also get hold of some fuel.

''If you are lucky, you might get fuel, or you must turn back home empty-handed. But despite this people still go every day to stand in the fuel queues for hours. My brother stood in the queue for nearly four hours, but he could not get fuel,'' said Ruvini Gunawardana, a 30-year-old homestay owner from Dambulla.

''It takes nearly three days to fill my car tank with fuel. I must stand in line to get the token and then stand in line again in the fuel queue. We are using our annual leave just to stand in queues,'' said Nirosh Vijay, a 33-year-old radio presenter from Colombo.

Even medical workers who are supposed to get priority for fuel are having problems.

''The system is not organized and there is poor communication. Health care workers were allocated only Fridays to pump petrol and even doctors are not able to get fuel sometimes," said Rajmohan Rajramanan, a 28-year-old medical intern at a major children's hospital in Colombo.

"The fuel queues for doctors are nearly 2 kilometers long and it takes four hours to get fuel. We also have to wait until fuel reaches the stations. It takes up an entire day. Since we are needed in the hospital, not everyone can just go and wait in the queues,'' he added.

Public transport has also been limited and bus ticket prices have risen exponentially. The lack of transport options makes commuting and emergency situations increasingly difficult. There are few trishaw and cab drivers still on the roads, and the fares of those who remain have risen substantially.

''Young people like me can manage traveling in such packed buses. But for old people and women it's very hard,'' said Amaan, the business owner from Dehiwala.

''My cousin is pregnant and has a complication with her pregnancy which requires her to go to the hospital daily for an injection. But due to fuel shortages, they cannot travel in their car. They must take trishaws which are expensive,'' 28-year-old graphic designer Arunthathi Thiyagarajah, from Kandy, told DW.

Walking and cycling have become the preferred choice for many Sri Lankans. But bicycles have also become expensive, with their prices rising from around 10,000 rupees to up to as high as 80,000 rupees.

As the fuel crisis worsens, there is a possibility that the current restrictions will be extended for another 12 days as the government struggles to pay for fuel deliveries.

''We do not know what will happen after July 10,'' said Dhatshayeni Karthigesu, a 25-year-old catering business owner from Wellawatte, who had to temporarily shut down her business due to high prices. ''We have switched to induction stoves for cooking in my home, but people who cannot afford to do so are suffering."

The crisis in Sri Lanka is prompting a large-scale migration. ''Sri Lanka is my home but if the situation worsens and there is a stricter lockdown, I am planning to leave the country and go to India. The time zones are similar, and I can work remotely from there temporarily,'' said Arunthathi.

Since the Sri Lankan rupee's value is falling, many want to go abroad to earn money, save up until the economic situation improves, and then return to Sri Lanka. Others want to leave the country permanently.

Families are also sending their children abroad to study, for example in India, due to the disruptions and school shutdowns. Wealthier Sri Lankans are trying to migrate to the UK, US, Australia, Canada or the EU to work or study.

Large numbers of people are applying for new passports or to renew their old ones. Slots to get passport appointments at passport offices are fully booked for nearly three months. A passport can be processed in one day, but only for a fee of around 15,000 Rupees. For standard passport processing, the price is around 3,500 Rupees, but the wait time is up to two months.

''It will take at least three to five years for things to change, and young people who are being affected the most want to leave," said Nirosh who is applying to study for a master's degree abroad and wants to take his family with him. "My salary is staying the same, but the expenses are rising. We are worried about our futures and that of our families. Many are willing to even fall into debt, if it means that they can leave the country."

Sri Lankans from lower economic classes or lower education levels are trying to migrate to Middle Eastern countries to work as daily wage laborers. Renu, a Sri Lankan widow in her 40s from Kurunegala, migrated last year to Dubai in a desperate attempt to escape the economic crisis and is now working there as domestic help. She has multiple jobs and saving money to send back home and hopes to bring over her daughter to work there too.

Another Sri Lankan woman who arrived in Dubai two months back on a three-month visa is still finding it difficult to find a job. Both these women feel that the situation in Sri Lanka will not get better anytime soon.

This sentiment is shared by many Sri Lankans who do not want to leave their country, but see no alternative as the situation there continues to deteriorate.